A strong upward correction sweeps the crypto markets on Monday, as the bulls welcome March on an upbeat note. Markets are yearning for a great reset after last week’s blood bath, especially after the flagship cryptocurrency, Bitcoin, lost the $50,000 threshold.

The no.1 digital asset eroded 20% of its value from life-time highs, although found solid support just ahead of the $43,000 level, marking three-week lows. After a brutal week, the BTC/USD embarked upon a recovery rally, having recovered nearly 8% so far.

The V-shaped reversal in the most dominant crypto coin could be attributed to four main reasons, with the recovery in the risk sentiment could be highlighted as the key driver.

The US House of Representatives passed the much-awaited $1.9 trillion stimulus package while the UK readies additional budget support for business, due to be announced this Wednesday. The broader markets are cheering the stimulus optimism, limiting the recent advance in the US dollar, which eventually benefits the USD-denominated Bitcoin.

Another catalyst behind the rise is the Reuters report that China’s Inner Mongolia has proposed to shut down crypto mining farms by April 2021, in order to comply with its energy-saving rules. Inner Mongolia became a popular destination for cryptocurrency miners due to low electricity prices.

Also, of note remains the large inflow from wallets, with the Whalemap showing big whale clusters near $46,000 and $56,000, which are likely to act as the key support and resistance levels respectively, going forward.

Last but never least, the price of Bitcoin has returned to premium on Coinbase crypto exchange, signalling a solid sign of improving appetite for the no.1 digital asset from the US traders.

Other major crypto coins, including Ethereum and Ripple, are benefiting from Bitcoin’s stellar performance.

After four straight days of decline, the Bitcoin bulls return with pomp and show this Monday, staging an impressive recovery of over $5,000 from the two-week lows. Joining the abovementioned fundamentals, the rebound in the pioneer cryptocurrency is also chart-driven.

The granddaddy of cryptocurrencies confirmed a falling wedge breakout on the 12-hour chart earlier today, paving the way for a fresh leg higher. The natural tendency of the falling wedge is to yield an upside break, which now calls for a retest of the record highs, as the BTC bulls continue to keep the $60,000 mark in their sight.

Ahead of the all-time highs, the no.1 coin needs to scale the 21-simple moving average (SMA) at $50,367 on a 12-hour candlestick closing basis for a sustained move higher.

The Relative Strength Index (RSI) edges higher at 49.58, looking to recapture the midline. This likely suggests that the renewed upside could have additional legs. 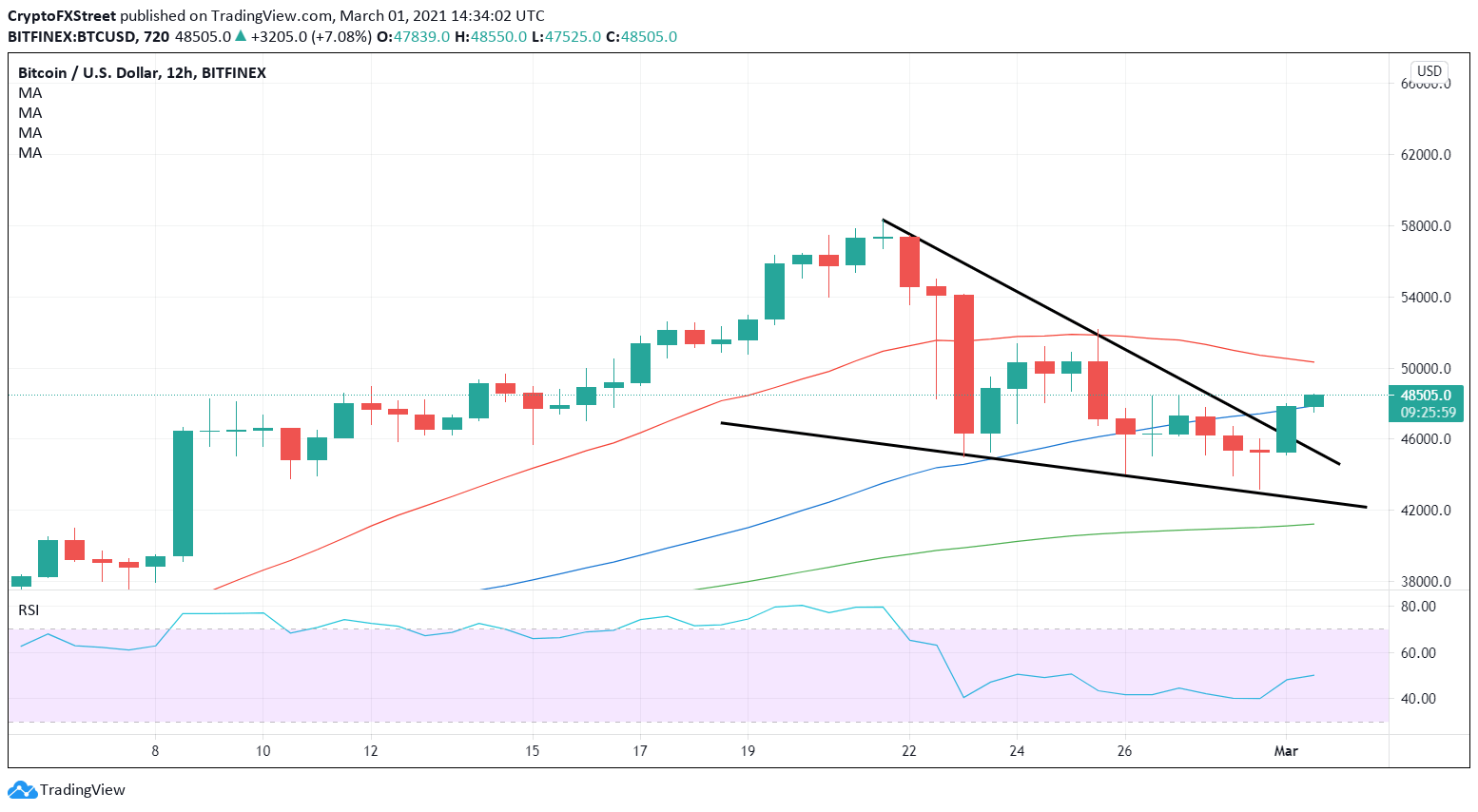 If the BTC buyers fail to gain a foothold above the aforesaid critical resistance at 21-SMA, the downside could re-open, with the immediate support seen at the upward-sloping 50-SMA at $47,960.

A breach of the latter could expose the falling wedge resistance now support at $45,424. The next relevant support is aligned at $43,100 – two-week lows.

Check Out: Why Bitcoin Is Going To Explode In 2021

Ethereum is on a steady rise so far this Monday, recovering its 70% slide from all-time-highs above $2100. The second-most widely traded digital asset benefits from a fresh buying wave that has gripped the crypto board, as it piggybacks the BTC/USD price action.

The technical setup on ETH/USD’s 12-hour sticks is no different from that of Bitcoin’s, barring that the further upside in Ethereum appears elusive.

A falling wedge formation is validated on Ethereum’s 12-hour timeframe, calling for more gains amid a bullish breakout.

However, warranting caution for the ETH bulls is the RSI, which still remains in the bearish zone, below the midline. The indicator has currently turned flat to trade at 44.58.

Therefore, the spot is at the risk of breaking below the 100-SMA cushion at $1510. If the selling pressure intensifies, the pattern resistance-turned-support at $1429 could be challenged.

Further south, the three-week lows at $1288 could come to the rescue of the buyers. However, a test of the bullish 200-SMA at $1099 would be inevitable on a sustained move below the latter. 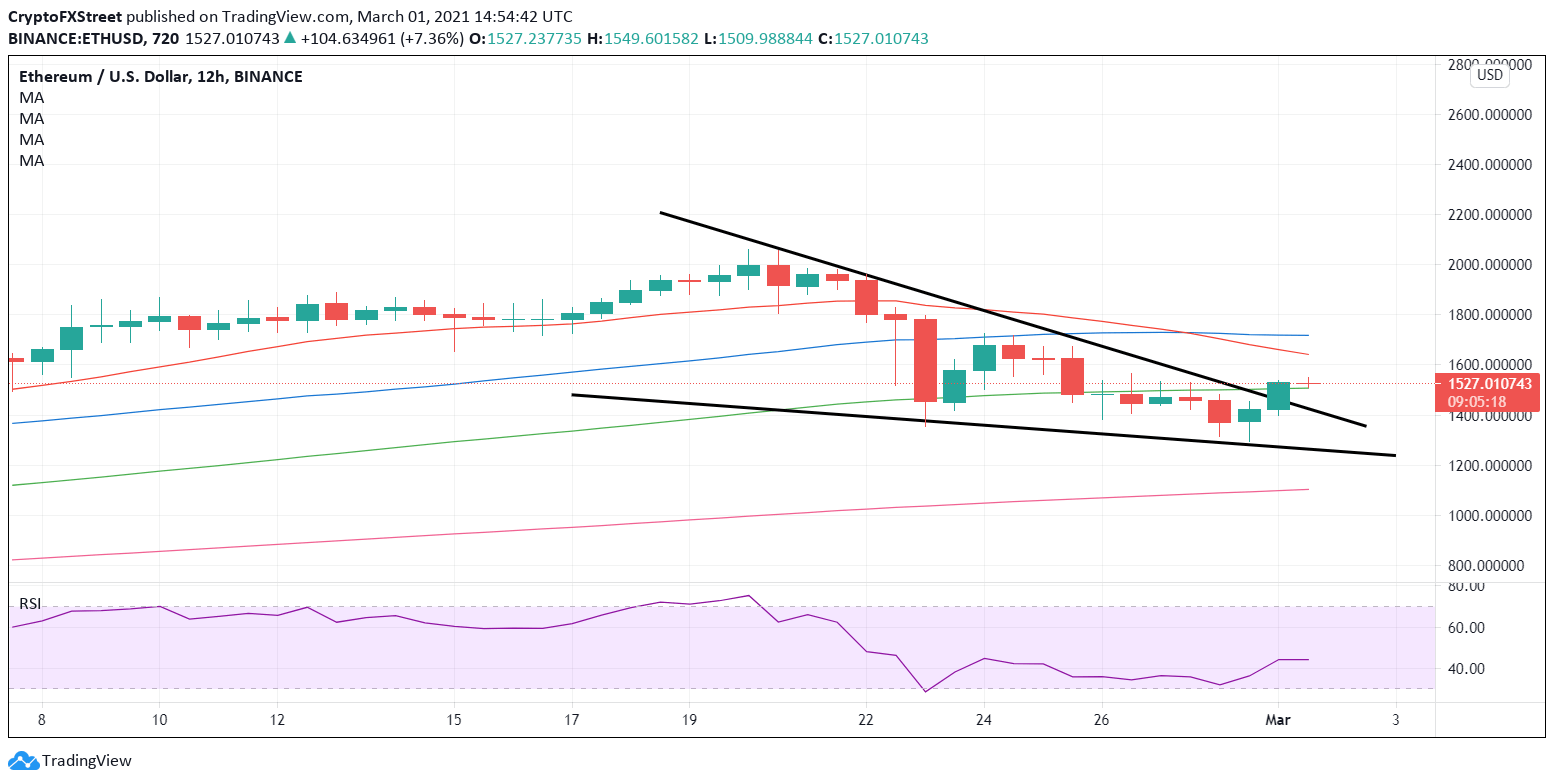 To the upside, the bearish 21-SMA at $1638 could limit additional recovery moves.

Meanwhile, the horizontal 50-SMA barrier at $1720 is the level to beat for the ETH bulls on their way to the $2000 threshold.

Read Also: What Will Ethereum Be Worth in 2030?

Ripple holding onto critical support circa $0.40, where next?

The XRP/USD pair extends its downside consolidative phase into a fourth day on Monday, having hit a three-week low at $0.3609 last Tuesday. The no.7 coin remains locked in an extremely narrow range, showing some resilience to the elevated volatility seen across the crypto space.

The price meanders in the lower band of the four-day trading range, as the bears seem to gather pace for a decisive break to the downside. The Ripple price is wavering within a symmetrical triangle for a month, as observed on the daily chart.

Sellers await a daily closing below the rising trendline support at $0.3933 to confirm a breakdown. That area also displays the intersection of the bullish 50-SMA.

The bears would target the horizontal 200-SMA at $0.3458. The 14-RSI has turned northwards but remains below the 50.00 level, indicating that the downside bias still remains intact. 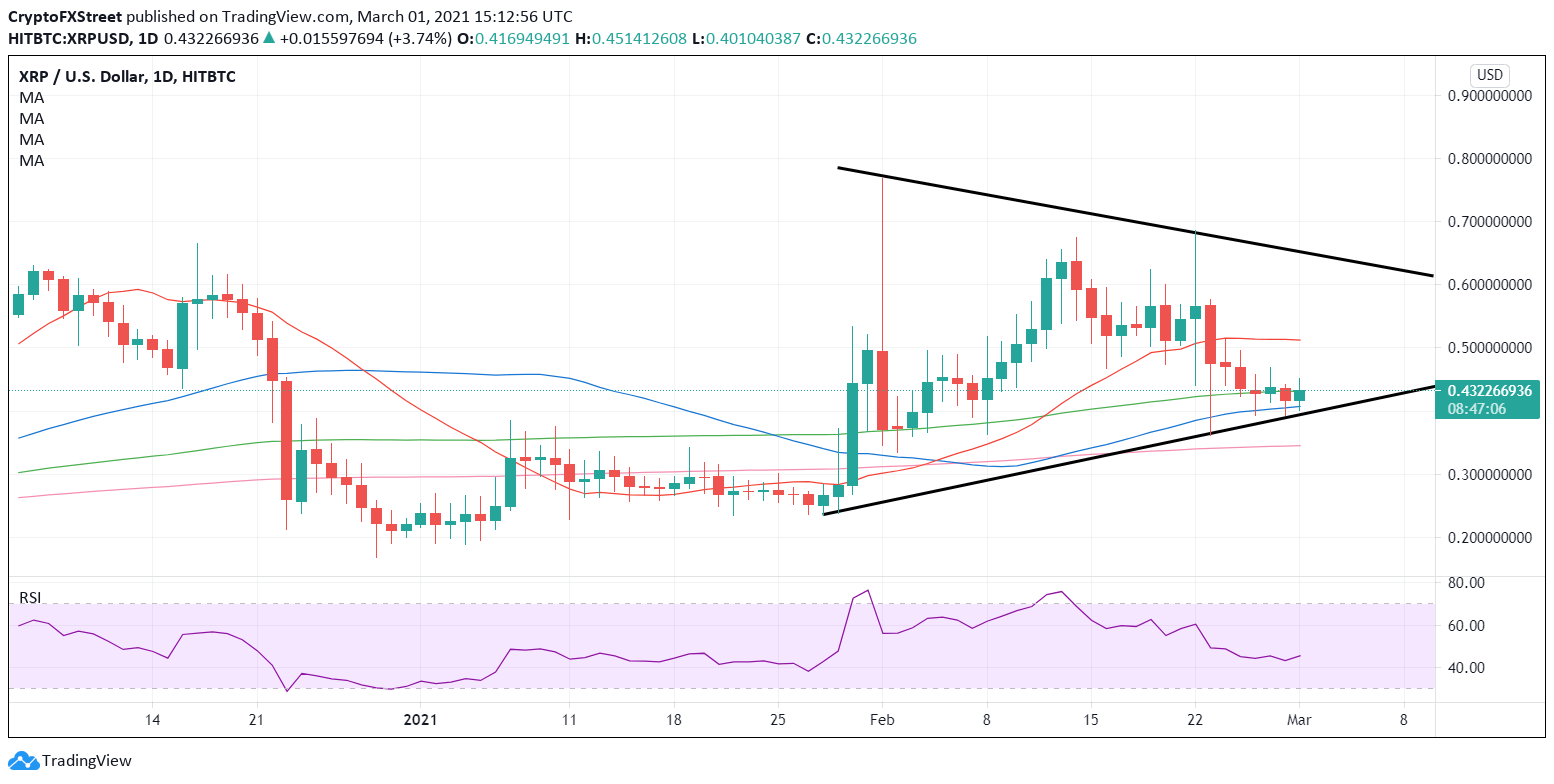 Alternatively, the XRP bulls need to crack the 100-SMA with conviction to extend the recovery momentum. That level aligns at $0.4348. Buyers look for a daily closing above the latter.

The horizontal 21-SMA at $0.5141 could challenge the bullish commitments. It’s worth noting that XRP/USD hasn’t given a daily closing above that hurdle since February 22.

Acceptance above the latter could negate the near-term bearish view on the prices.