The cryptocurrency market is going back to green and fast, perhaps because Bitcoin has made a confirmed break above $50,000. Bitcoin is doddering slightly above $51,000 at the time of writing as bulls look toward $60,000.

Coinbase made the headlines on Friday, announcing the listing of Dogecoin as a tradable asset. The CEO of the newly publicly listed company, Brian Armstrong, announced an earnings call where a $771 net profit was posted in the Q1 of 2021.

Most of the crypto assets have posted considerable gains on the day. Ethereum has reclaimed the position above $4,000 and is up 8.5%, while Ripple is up 10.5% to trade at $1.4. Other best-performing cryptocurrencies include Chainlink, Ethereum Classic, VeChain, Theta Network, and Polygon.

According to data by Glassnode, a leading platform for on-chain metrics and analysis shows that BTC supply held by long-term holders has gradually returned to accumulation mode. The peak in accumulation is not a bullish signal and can be used to identify a peak similar to 2017. However, the current data shows that HODLers hold onto 8% more of Bitcoin’s circulating supply in dormant wallets. Note that dormant supply tends to increase despite price dips. 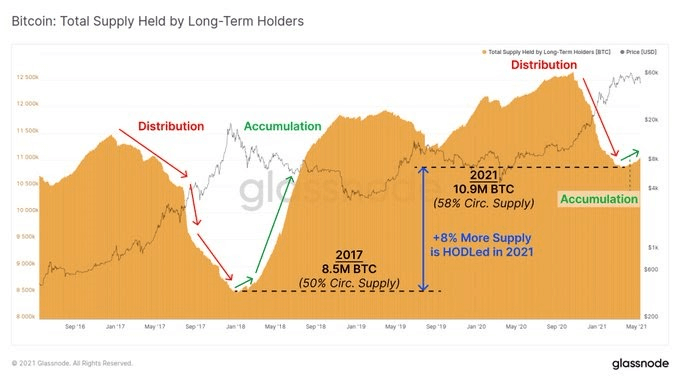 In the meantime, Bitcoin is back to trading above $50,000 as bulls battle to make a real break past $51,000. Short-term technical levels have started to align for a possible upswing toward $60,000.

The Relative Strength Index (RSI) has reinforced the improving technical outlook as it recovers from the oversold area. Similarly, the Moving Average Convergence Divergence (MACD) will likely flip bullish in the coming sessions. Therefore, it is imperative to say that the slightest resistance path is upward.

Ethereum has made an incredible recovery from $3,500, support established to halt the mid-week declines. The gap to $4,000 has been closed, but the biggest challenge is to secure higher support. The pivotal price action at $4,000 shows indecisiveness in the market at the time of writing.

A comprehensive look at the short-term chart, four-hour reveals a developing bullish picture. The MACD and the RSI have flipped bullish, setting that stage for a possible breakout initially to $4,400 and later toward $5,000.

It is worth mentioning that delay should be expected at the ascending channel’s middle boundary. If this resistance is not broken, selling pressure will intensify, paving the way for losses back to $3,500.

Ripple is one of the best-performing crypto assets on the day, following the rise from support at $1.2 to highs beyond $1.4. The cross-border token has struggled to defy gravity since the beginning of May; thus, the 10.5% uplift is commendable.

A descending parallel channel currently controls the price action. The channel’s support was crucial to the support at $1.2. However, the upper boundary continues to limit price action toward $2.

Meanwhile, Ripple is trading at $1.4 while facing acute resistance at the 200 Simple Moving Average (SMA).  If this hurdle is not pushed out of the way, XRP will flip bearish. Keep in mind the technical picture seems weak and any interruption to the uptrend will be detrimental.

On the flip side, closing the day under $1.4 would trigger more sell orders as sellers take control. The support at $1.2 is in line to keep the bearish advances at bay, although if breached, the bearish leg will stretch to $1 and $0.85, respectively.