Top 3 Price Prediction Bitcoin, Ethereum, Ripple: ‘Buy the dip’ Remains In Vogue Across The Crypto Board

The bullish sentiment across the crypto markets remains strong so far this week, re-enforcing views for all-time highs in the world’s most widely traded digital assets, including Bitcoin and Ethereum.

The same cannot be said for Ripple, as the bull-bear tug-of-war intensifies. A slew of negative news around XRP/USD continues to undermine the sentiment.

Earlier on, the blockchain payment firm, Ripple, announced that it will end its partnership with money transfer services company MoneyGram International Inc. Recall that the company Ripple bought a $30 million stake in MoneyGram in 2019, with the partnership initially set for two years.

Meanwhile, the impending case between Ripple vs. US Security and Exchange Commission (SEC) keeps the investors unnerved.

For the pioneer cryptocurrency, Bitcoin, the on-chain metrics project a smooth ride towards the $60,000 mark. According to data from CryptoQuant, the increased influx of coins from exchanges into private wallets at a faster rate suggests that healthy demand will persist over a longer duration.

Let’s look at the technical charts of a few of the dominant cryptocurrencies, in order to gauge near-term price direction.

Bitcoin: Every drop is a buying opportunity as technicals favour the upside

The week-long winning streak remains intact for the flagship cryptocurrency, as the price hovers within Wednesday’s trading range, with a sustained move above $57,500 much awaited.  A test of the all-time-highs at $58,367 remains inevitable in the coming sessions, as the technical indicators point to more gains on Bitcoin’s 12-hour chart.

Buyers returned after BTC/USD saw a sharp 5% drop to $54,400 levels earlier this Thursday, as they resorted to bargain hunting, with the pioneer currency tipped to reach the $60,000 mark.

Ahead of that level, the bulls need to take out the record highs above $58,000, where the horizontal trendline resistance is aligned.

This appears likely in the near-term, as a bull cross spotted on the said time frame adds credence to an upbeat view. A bull cross got confirmed after the 21-simple moving average (SMA) crossed above the 50-SMA.

The Relative Strength Index (RSI) is probing the overbought territory, currently at 69.58, indicating that there is more room to the upside. 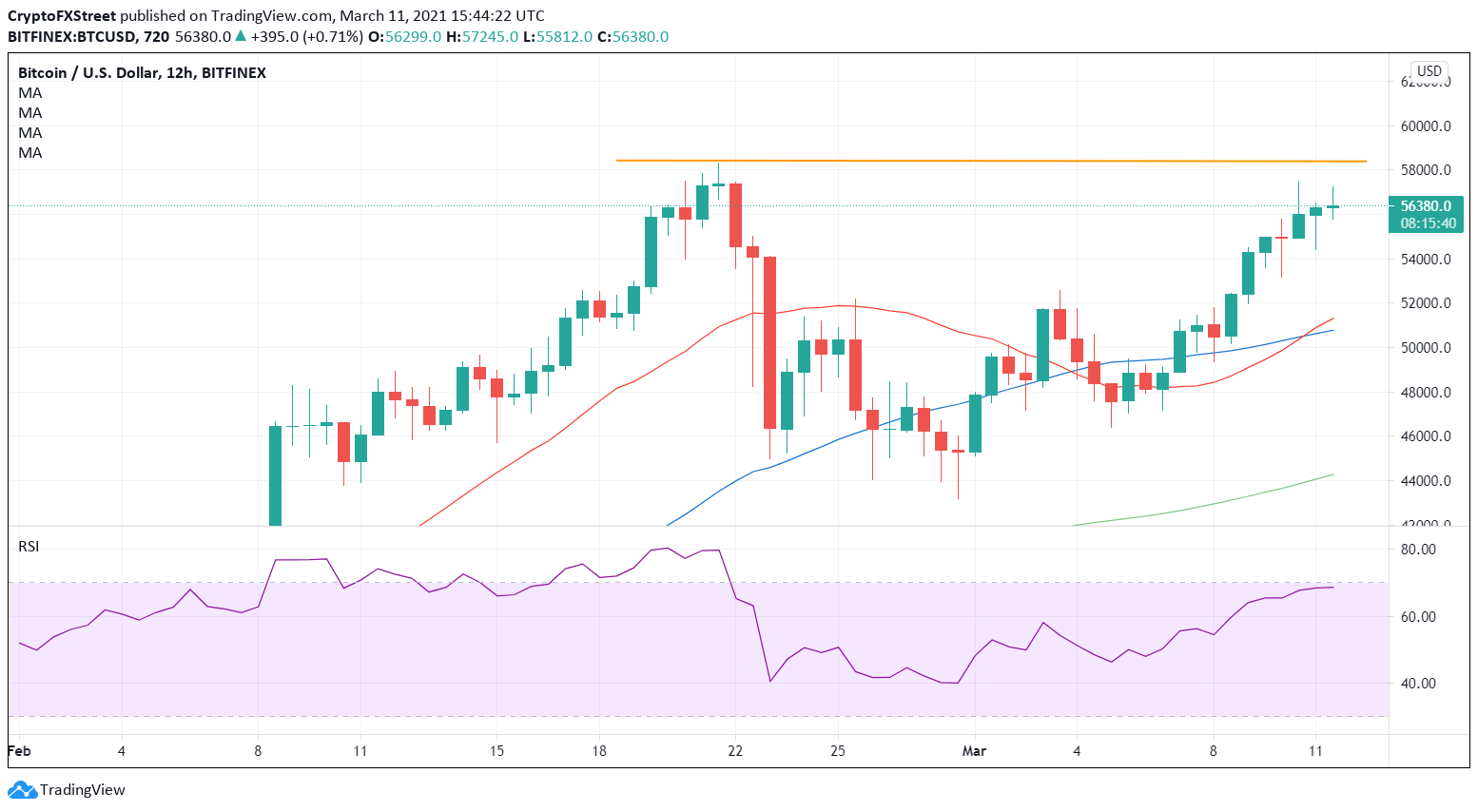 If the abovementioned horizontal trendline resistance appears to be a tough nut to crack, the sellers could take that as an excuse to drive the rates back towards the daily lows of $54,401.

The bears to crack Wednesday’s low at $53,155 to negate the near-term bullish bias. Acceptance under that level could initiate a drop for a test of upward-sloping 21-SMA at $51,350.

Further down, the $50,000 psychological magnate could offer some temporary reprieve to the BTC bulls.

Ethereum: Poised for a test of the $2000 mark if this key hurdle is scaled

Ethereum is attempting recovery on Thursday after a $100 corrective pullback seen a day before. Despite the sell-off, the ETH bulls remain motivated, as the $2000 threshold remains in sight.

At the moment, the world’s second most favourite digital asset is gathering pace to challenge the key $1900 hurdle, as it continues to trade in a falling channel formation since early February on the 12-hour chart.

Ethereum looks primed to dive out of the falling channel barrier at $1900 on a sustained basis, which would confirm a bullish breakout.

The doors would then open for a massive rally towards 2,500 and beyond. But the $2000 round figure could threaten the upsurge.

The life-time highs at $2,041 could be also challenged, as the upside appears more compelling, with the RSI also pointing north while above the midline. 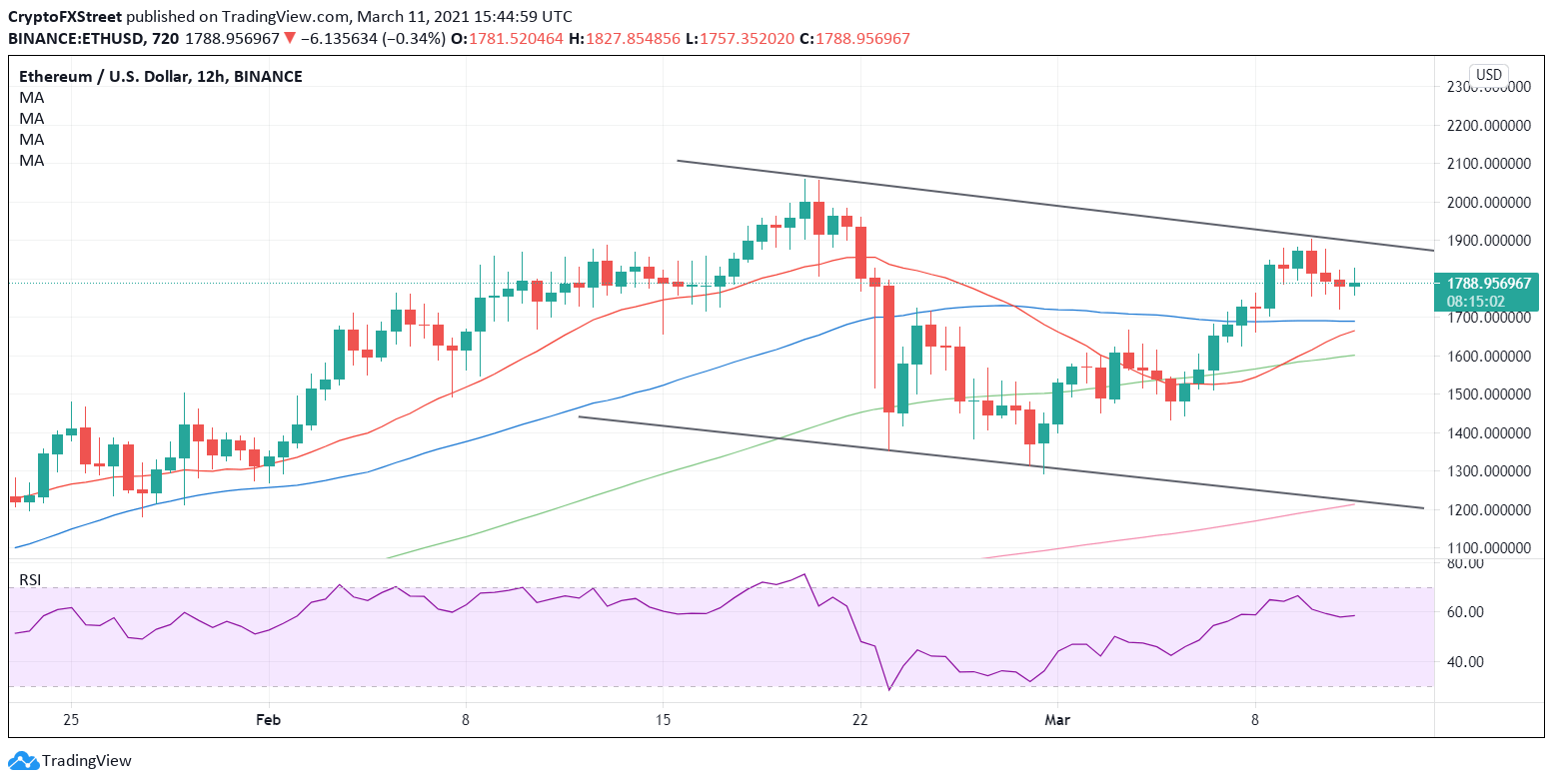 As observed on the technical graph, the bulls need to crack only this critical barrier to extend its uptrend.

Meanwhile, the No.2 coin remains buoyed by a bunch of healthy support levels, making the case for the upside stronger.

Powerful support is placed around $1680-$1665, where the bullish 21-SMA coincides with the horizontal 50-SMA, also charting an impending bull cross.

To conclude, the bulls are looking for a catalyst to find a strong foothold above the $1900 level.

Check Out: Will Ethereum Price Double In 2021 Due To The Future Of DeFi?

Ripple: Defending the 100-DMA is critical for the XRP bulls.

XRP/USD bulls seem to have given up after several failed attempts to find acceptance above the critical short-term 21-daily moving average (DMA), now at $0.4730.

Although the upward-sloping 50-DMA continues to remain a saviour for them, capping the downside at $0.4413.

It’s worth noting that the range is getting tighter and, therefore, a range breakout looks likely anytime soon.

The odds of a downside break are higher, given that the RSI points south below the 50 level. 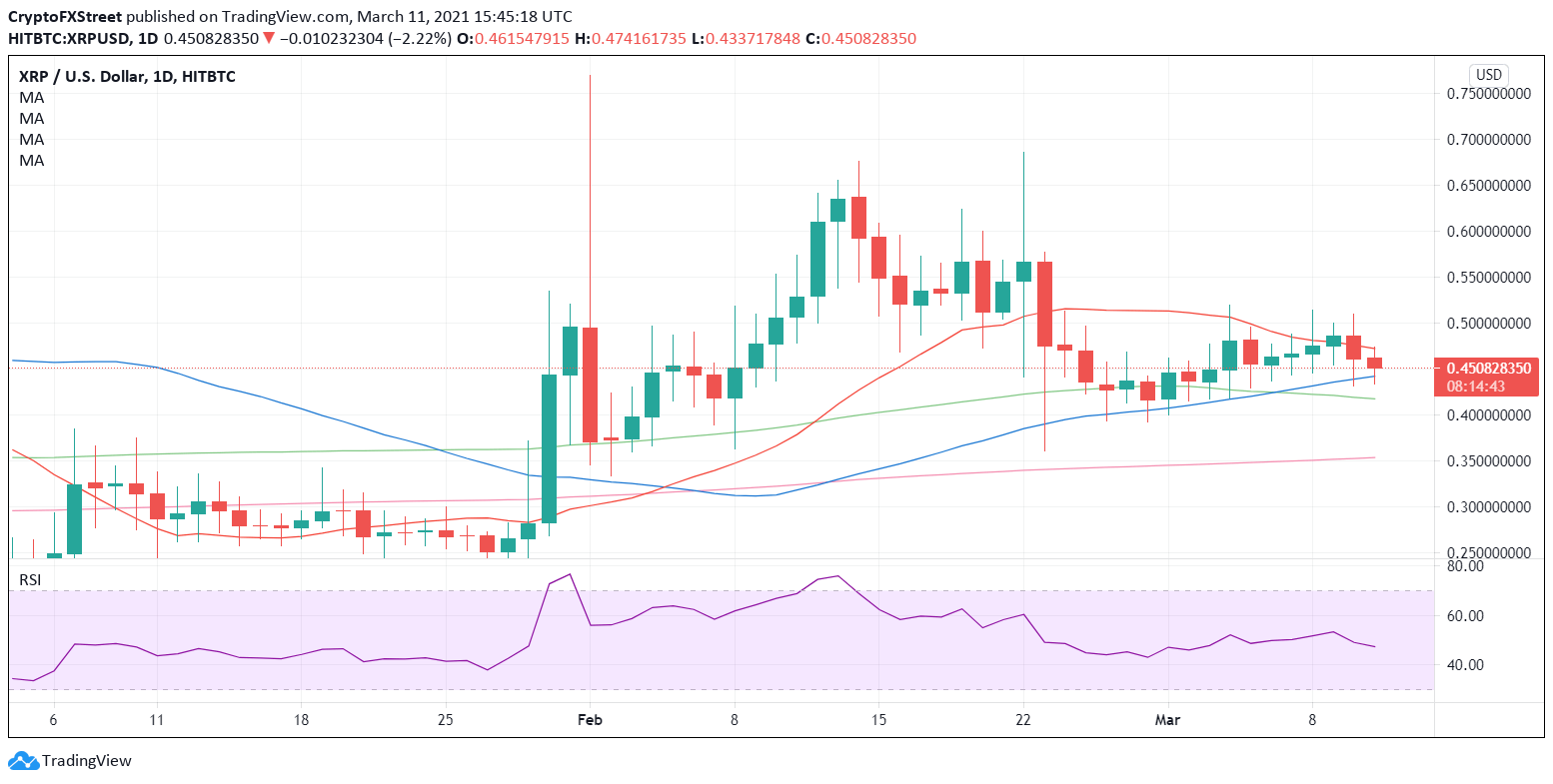 Alternatively, if an upbeat tone across the crypto board comes to the rescue of the XRP bulls, daily closing above the 21-DMA could revive the upside momentum in the No.7 digital coin.

The spot would also need a firm break above the $0.50 level to call for additional upside, as the bears are likely to retain control going forward.

The 50 and 100-DMA bullish crossover that was confirmed on March 6 also failed to lure the buyers.