The weekend love for cryptocurrencies vanished, heading into a new week this Monday. A sharp 6% correction in Bitcoin from new lifetime-highs of $61,699 (on Bitfinex) had a cascading effect on the other widely traded digital assets.

The record rally came after US President Joe Biden signed the $1.9 trillion stimulus bill on Friday. The massive stimulus stoked inflation risks amid ongoing economic recovery, as investors scurried into the flagship currency, which is considered as a hedge-against-inflation.

Also, an increase in retail participation collaborated with the move higher in the No.1 one. Although the $5000 retracement could be attributed to signs of overheating in the futures market.

Meanwhile, there has been a familiar pattern in recent months that every time Bitcoin renews record highs, it sees a sharp corrective pullback and enters a consolidative mode before the uptrend resumes.

However, the main trigger was the Reuters report, citing that India is proposing a cryptocurrency ban, which would penalize anyone trading in the country or even holding such digital assets.

The panic selling fuelled a bloodbath across the crypto board, knocking-off Ethereum and Ripple alongside. Ripple was thrown under the bus after the latest data obtained from XRPscan showed that Jed McCaleb, the former Chief Technology Officer (CTO) at Ripple, dumped 150 million XRP from his “tacostand,” wallet.

How are the world’s most widely-traded crypto coins positioned on the charts?

The pioneer cryptocurrency is attempting another run towards the record highs above $60,000 after the corrective decline found significant support around the $54,500 region. The bears are challenging the bullish commitment once again, as the BTC price looks to resume the uptrend seen over the weekend.

The renewed buying interest in BTC/USD should call for a sustained break above the powerful resistance at $58,700, which is the confluence of the 21-simple moving average (SMA) on the four-hour chart and rising wedge support-turned-resistance.

Note that Bitcoin confirmed a rising wedge breakdown on the said timeframe earlier on the day that ensued a sharp sell-off of around $3000. The latest leg down added to the previous decline from the all-time-highs.

However, the BTC bulls managed to recapture the upward-sloping 50-SMA at $54,955. The uptrend could regain momentum only on a four-hour candlestick closing above the aforesaid critical resistance at $58,700.

The next target for the buyers is aligned at the psychological $60,000 level, above which a retest of the record highs will be on the cards. 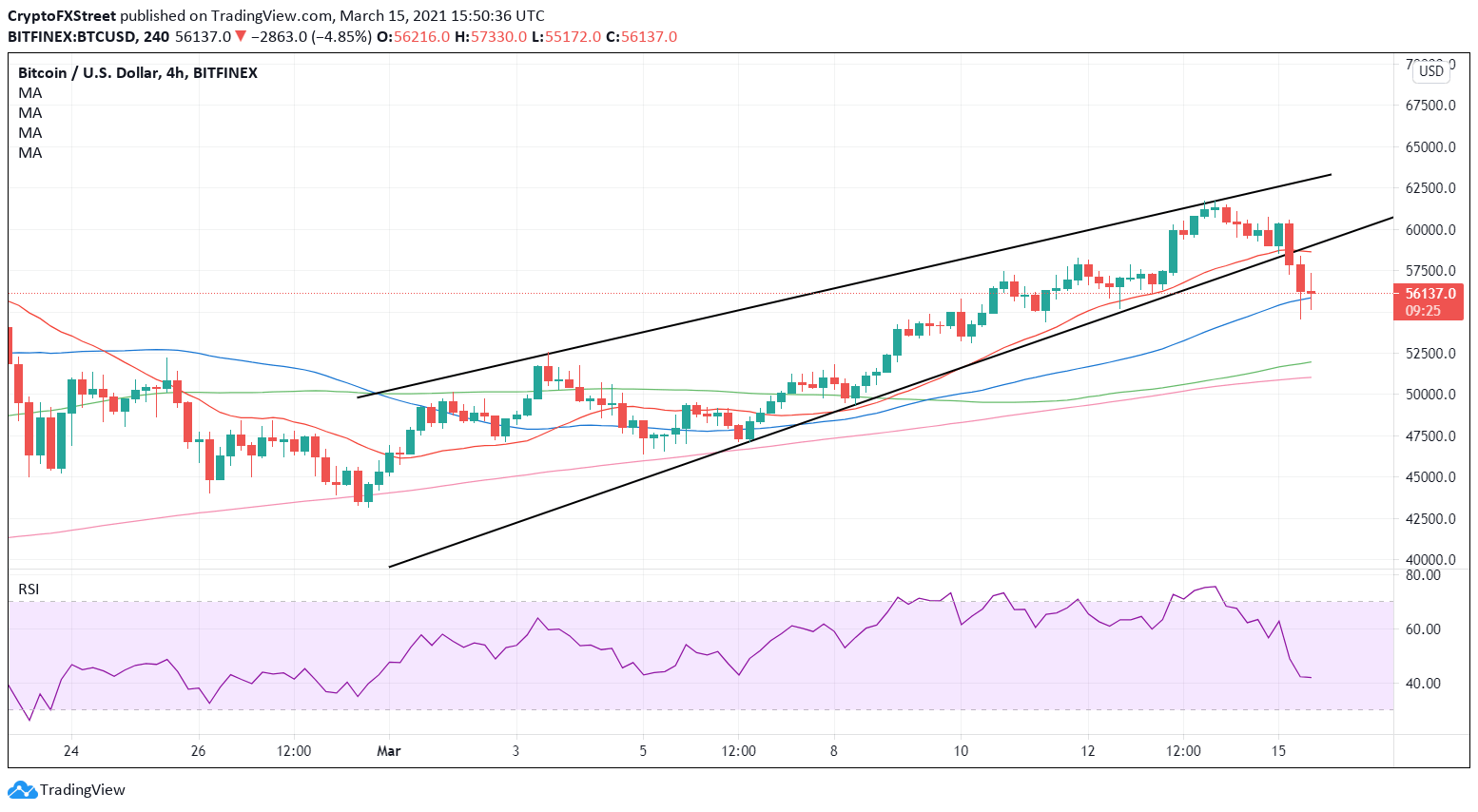 The Relative Strength Index (RSI) has reversed sharply from the lower levels but remains well below the midline, currently at 46.53. This suggests that Bitcoin is still not out of the woods yet.

If the sellers find acceptance below the 50-SMA support, the next stop for BTC bears is seen at the bullish 100-SMA at $51,983.

Ethereum: Bulls remain hopeful as long as this support holds

Sellers continue to lurk above $1900 for Ethereum, as the No. 2 coin falls for the second straight day on Monday, marking a negative start to the week.

Despite eroding $250 over the last 24 hours, the ETH bulls haven’t yet given up, as price challenges the $1800 level, as of writing.

ETH/USD tested fierce support at $1690, with a 12-hour candlestick closing below the latter would validate a rising wedge breakdown. 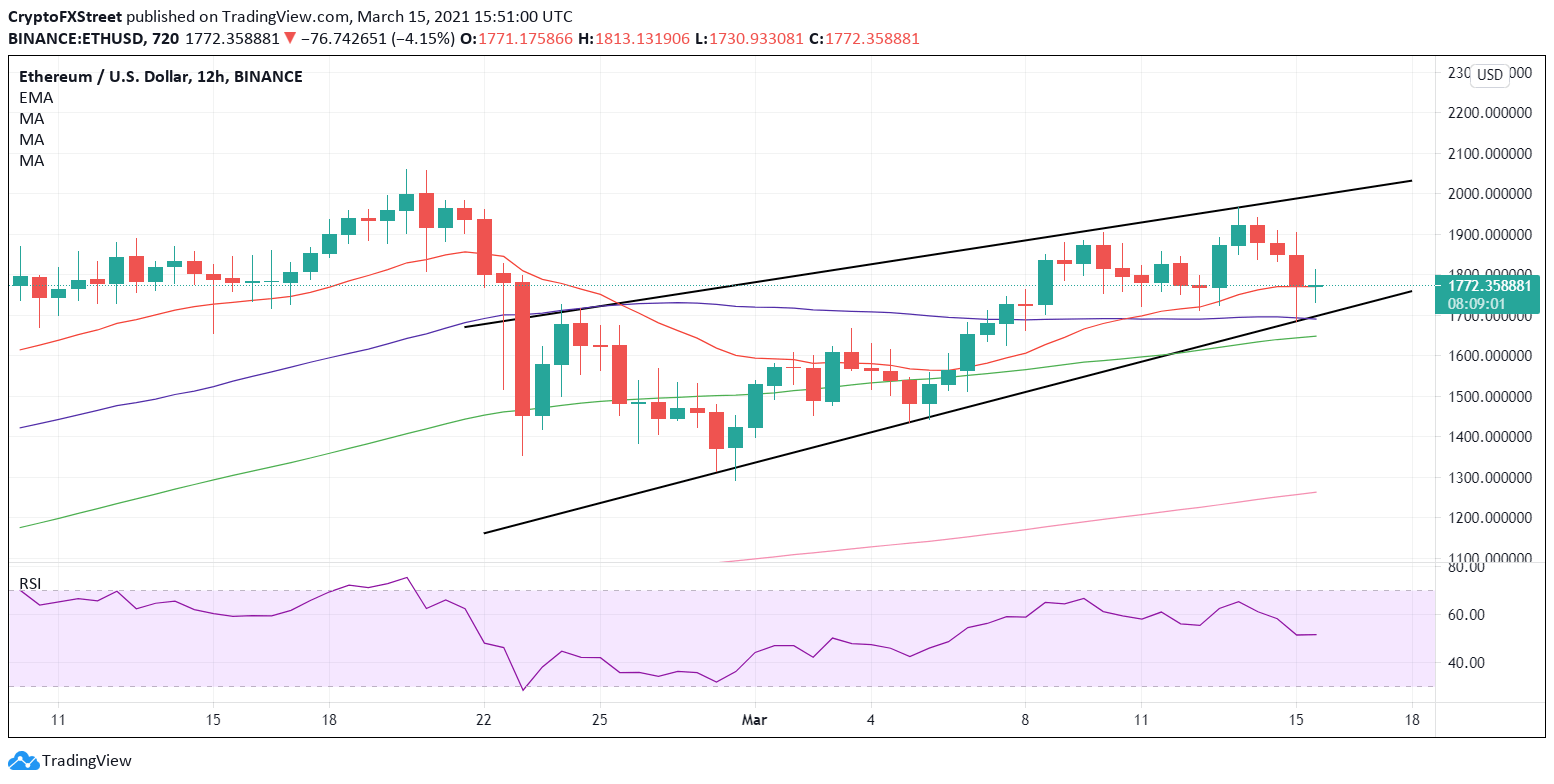 Alternatively, if the price holds onto the bullish 21-SMA at $1771 on a candlestick closing basis, we could the ETH bulls back in control.

The RSI edges higher at 52.88, allowing room for more upside. Therefore, the second-most widely traded digital asset could attempt another run towards the $1900 mark.

Further north, the March 13 high at $1967 could be retested, opening doors towards the pattern hurdle at $1995.

All in all, the path of least resistance appears to the upside amid plenty of healthy support levels stacked up to guard the downside.

Ripple: Downside appears more compelling as the bears may not have to try much harder

As XRP/USD gets squeezed into a much tighter range on Monday, the price seems to have tested the critical 200-SMA support at $0.4129. The XRP bears briefly cracked the key support to reach a low of $0.4068.

Since then, the bulls have fought back control, as they look to reclaim ground above the powerful resistance at $0.4550.

That level is the intersection of the 21 and 100-SMAs, also representing a bearish crossover on the 12-hour time frame.

Therefore, it seems to be rather a dead cat bounce for Ripple amid a bear cross. A bearish crossover shows that sellers or short-sellers are gaining control and a drop or continued weakness is likely in a stock's price, per Investopedia.

The XRP sellers await a strong catalyst for a fresh leg lower, which could yield a sustained break below the abovementioned 200-SMA support.

The daily low will come into play, with the $0.40 level likely to be the last line of defence for the bulls. The February 28 low of $0.3921 would be on the sellers’ radars.

However, if XRP/USD manages to find its feet above the strong upside barrier at $0.4550. the downward sloping 50-SMA at $0.4689 could be challenged.

Acceptance above the $0.50 level is critical to negate the bearish bias in the spot.

Check Out: What Will Ripple Be Worth In 10 Years?