After a sluggish weekend, crypto bulls are back in the game, as a new week kicks-in. The world’s most widely trading digital assets, including Bitcoin, Ethereum and Ripple, are aiming for all-time highs once again amid positive developments on the fundamental front.

The side trend witnessed in Bitcoin throughout the last week, induced a lacklustre performance in altcoins as well, in what seemed to be a phase of consolidation before the crypto markets see a renewed buying-wave.

The underlying optimism around Bitcoin emerges from the fact that institutional interest is racking up, especially after Kjell Inge Rokke’s, Norwegian oil billionaire, Aker ASA, said that the company, is setting up a new business, Seetee AS, to tap into the potential of Bitcoin. Rokke said: “Bit­coin may still go to zero. But it can also become the core of a new monetary ­architecture.”

Looking at Ethereum’s fundamental aspect, the IntoTheBlock's IOMAP model suggests that a strong base is formed around the $1550 level, where roughly 329,000 addresses have bought about 11 million ETH. Meanwhile, the bulls are likely to sail smoothly towards $1900, where 314,000 addresses have stocked up nearly 950,000ETH. This resistance zone is lighter when compared to the abovementioned solid support.

Ripple is seeing some signs of strength, courtesy of a Delaware court ruling, denying the UK-based asset manager Tetragon Financial Group’s request to redeem its $175 million investment in the blockchain company. This came amidst an ongoing legal battle between Ripple and the US Security and Exchange Commission (SEC).

“XRP is no more a security after the SEC filed the enforcement action than it was before it,” the court said, Ripple quoted in its press release.

How are these crypto coins positioned on the technical graphs?

Bitcoin preps up for a 29% rally in the coming days

The flagship cryptocurrency, Bitcoin is likely to see a smooth ride to the upside, extending its three-day upbeat momentum into Monday. The bulls have regained poise after Bitcoin managed to find a strong foothold above the $50,000 mark.

The technical setup for BTC/USD screams buy, as the price has confirmed a descending triangle breakout on the 12-hour chart.

The no.1 coin closed the 12H candlestick above the falling trendline resistance at $50,480, yielding an upside break. Recapturing the upward-sloping 50-simple moving average (SMA) at $49,827 on a sustained basis also added credence to the move higher.

Meanwhile, the Relative Strength Index (RSI) trades well above the midline, currently pointing north at 55.29. The bullish RSI continues to back the case for an impending rally towards the record highs of $58,367.

Further up, the $60,000 level could probe the bullish commitments, opening doors towards the pattern target measured around $65,000. 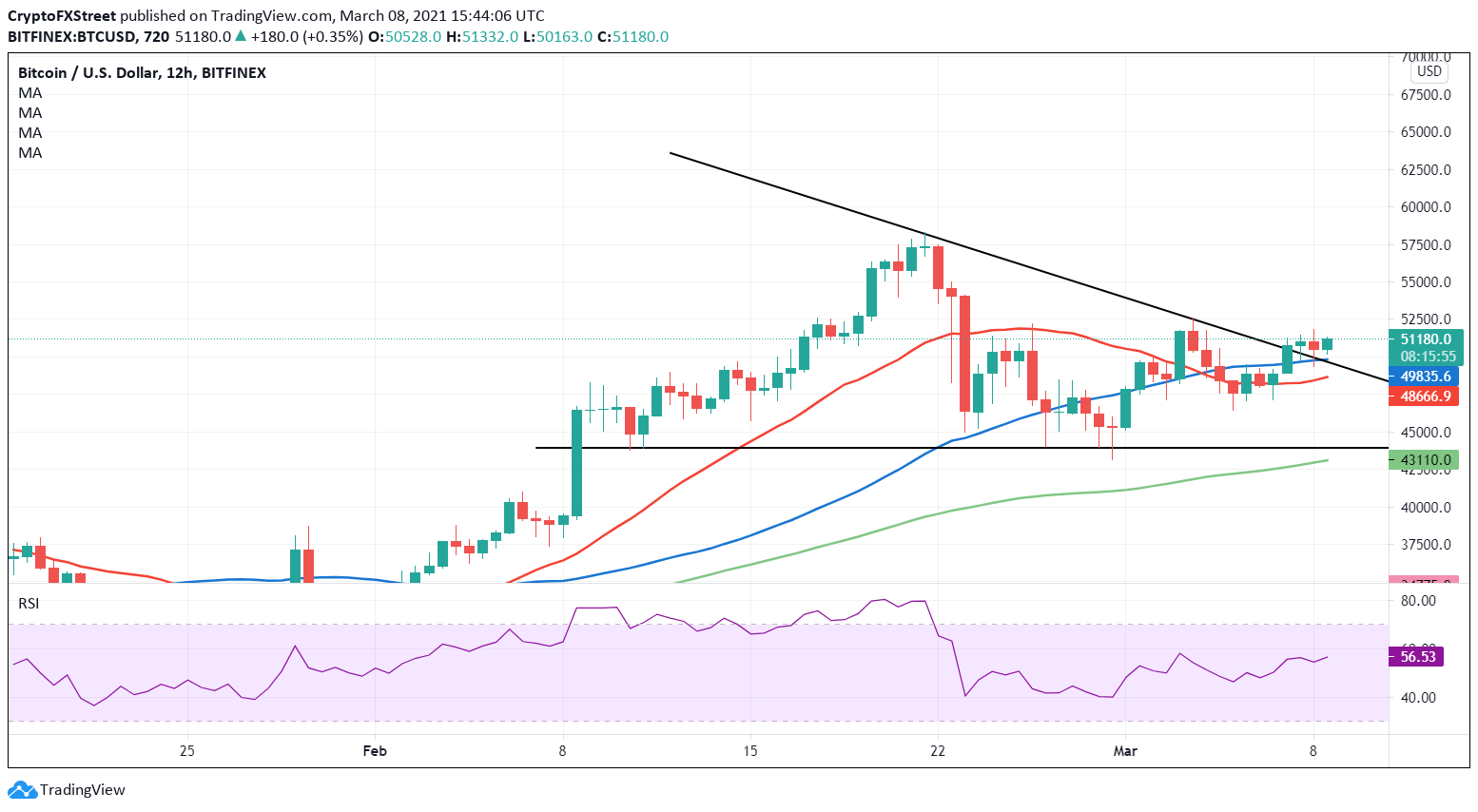 On the flip side, the immediate cushion is aligned near $49,800, where the 50-SMA coincides with the triangle resistance now support.

The bullish pattern will get invalidated if the price gives a candlestick closing below the horizontal trendline (triangle) support at $43,981.

Ethereum: Path of least resistance is to the north, with eyes on $2000

Ethereum is holding onto its three-day winning streak, awaiting a strong catalyst for the next break higher toward the $2000 level. The world’s second most favourite digital asset has carved a perfect bullish technical picture, which has pumped up the buyers.

Having validated a falling channel breakout on the four-hour chart last Friday, the ETH bulls finally found acceptance above the $1700 mark this Monday. In doing so, they have recaptured the critical upward-sloping 200-SMA at $1687.

At the press time, ETH/USD trades at $1743, adding 0.80% on the day. The bullish bias got bolstered by the bull cross formed earlier today. The 21-SMA pierced through the bearish 100-SMA from below, representing a bull cross on the said time frame.

The next stop for the ETH bulls is seen around $1895-$1900 levels, supported by the IOMAP mentioned above. At that level, the horizontal trendline (yellow) coincides.

The RSI trades firmer at 66.63 and heads towards the overbought territory, allowing room for more upside. 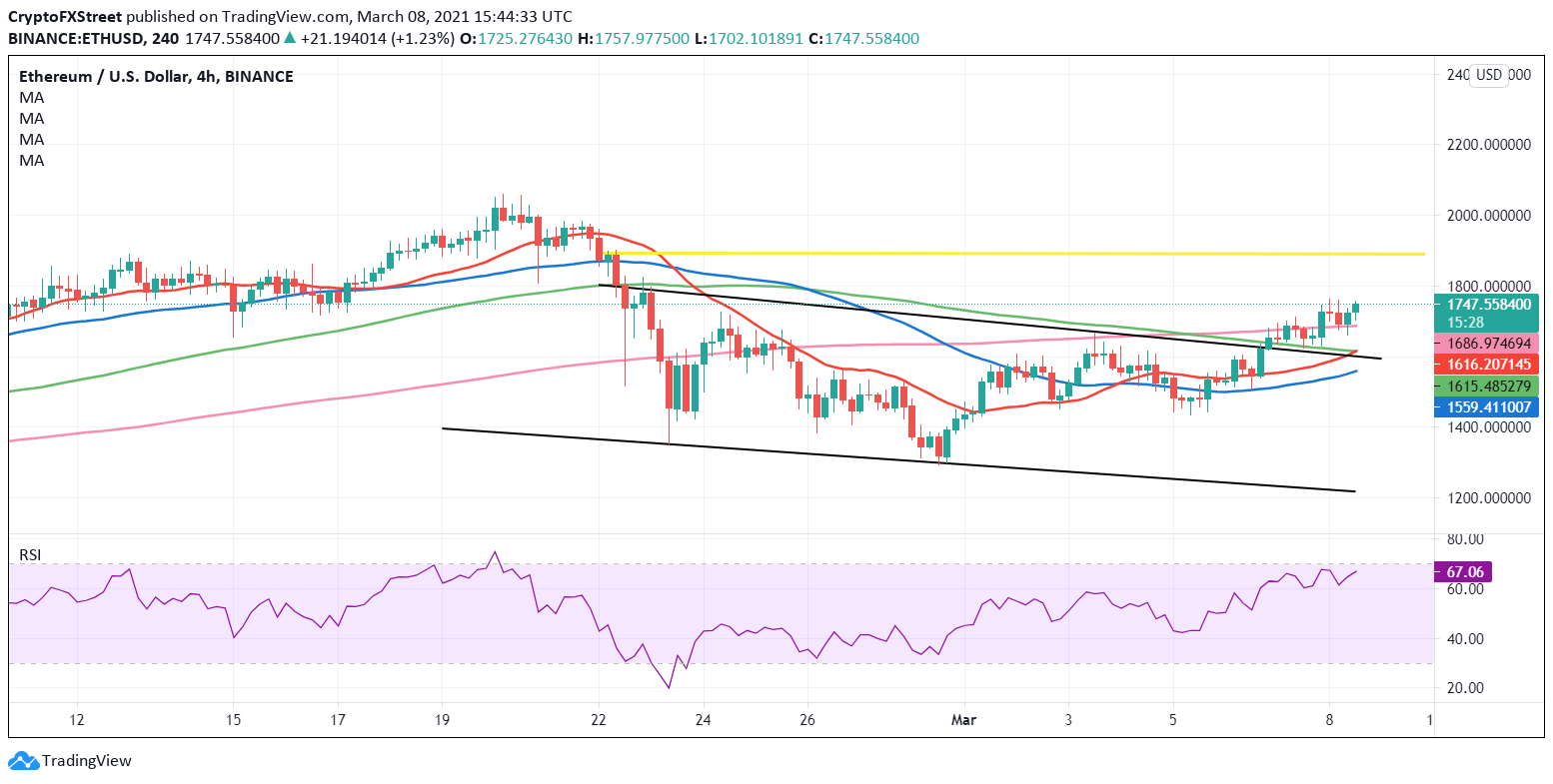 Alternatively, a four-hour candlestick closing below the 200-SMA could trigger a pullback towards the powerful cap at $1617, which is the intersection of the channel resistance now support, 21 and 100-SMAs.

A sustained move below the latter could expose the bullish 50-SMA support at $1559, which could likely be the last resort for the ETH bulls.

Don't Miss: Will Ethereum Price Double In 2021 Due To The Future Of DeFi?

Ripple: 50-SMA is the level to beat for the bulls

XRP/USD continues to wave back and forth in a familiar range between $0.50 and $0.45 since last Thursday. With the range getting tighter, the no.7 coin is primed for a big breakout, with the odds favouring the upside.

The XRP bulls need to crack just the horizontal 50-SMA on a 12-hourly candlestick closing basis.

A sharp rally towards the two-week-old falling trendline resistance at $0.60 cannot be ruled out, as the RSI edges higher, now at 52.77, indicating a potential upsurge.

A bull cross spotted on Sunday also offers extra zest to the XRP buyers. The bullish 100-SMA crossed the horizontal 200-SMA from below, charting a bullish crossover. 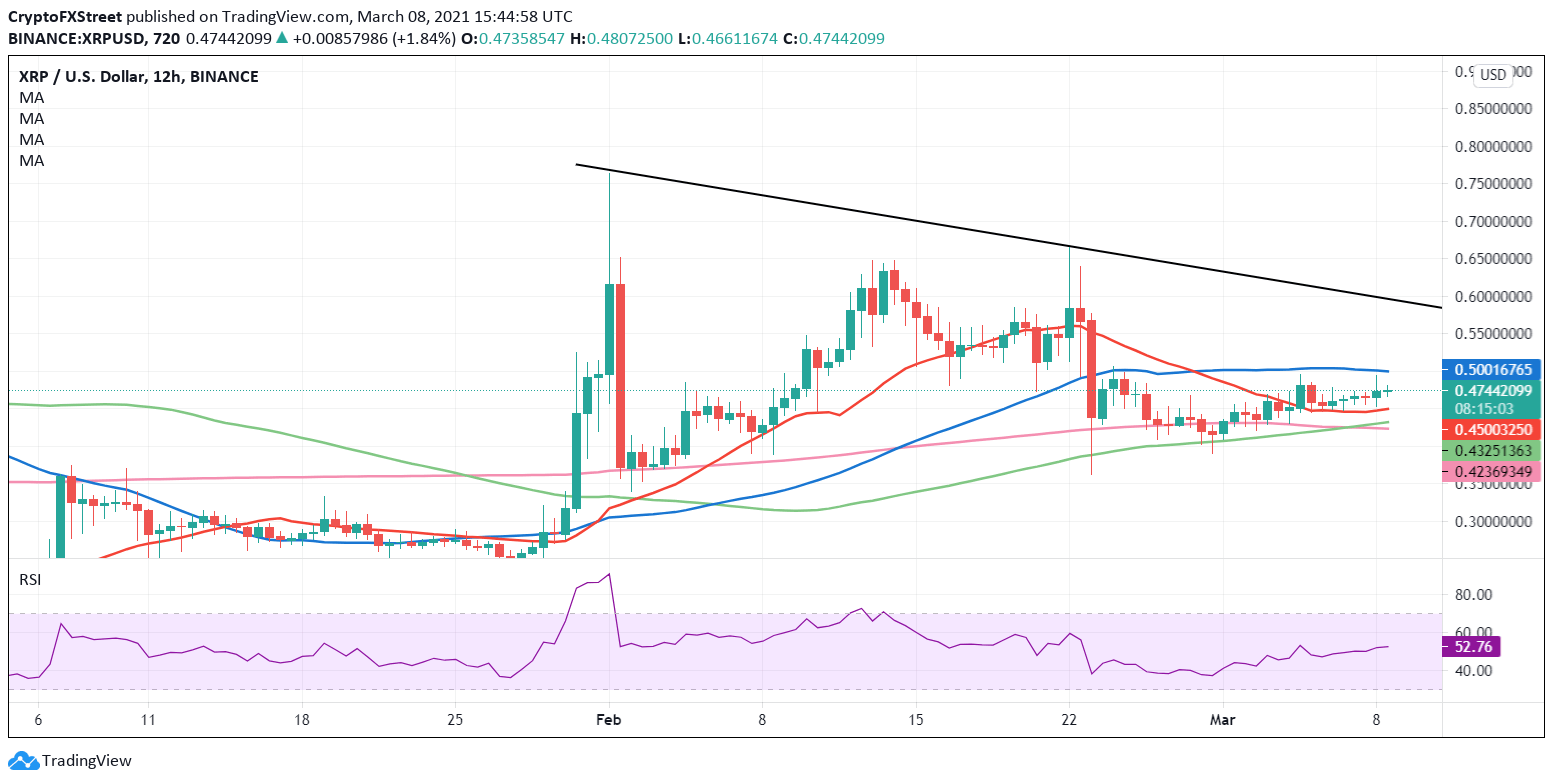 The next significant barrier awaits at the 200-SMA at $0.4236. A break below the latter is likely to propel sellers towards the $0.40 round figure.

Check Out: What Will Ripple Be Worth In 10 Years?