The cryptocurrency hit a setback on Tuesday after Amazon, the global retail behemoth, denied reports that it would add support for Bitcoin payments by the end of 2021. As the news reverberated through the market in the early hours of Monday, BTC shot up to $40,000. Other crypto assets followed closely, with Ethereum rallying to $2,400 and Ripple closing the gap to $0.7.

However, Bitcoin retreated to $36,000 following the denial from Amazon. Meanwhile, Bitcoin seems to have braced the correction well, and a recovery is underway above $2,400.

Bitcoin Whales Stack Up As The Market Recovers

According to an on-chain repost by Santiment, one of the leading behavioural analytics platforms, whales holding between 100 and 10,000 BTC have continued to accumulate since the selloff in May. Note that most weak retail investors were shaken off the market as the prices crashed. The addresses in this category have added 130,000 BTC in the last five weeks, with a whopping 40% accumulated in the past ten days. 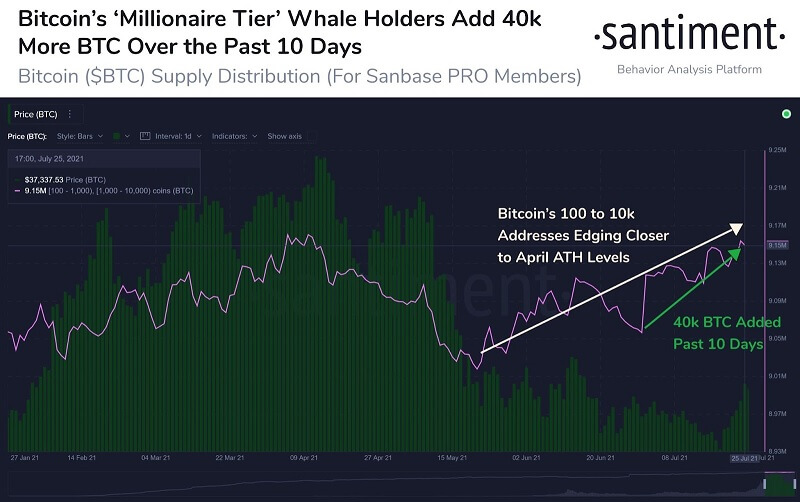 Meanwhile, Bitcoin price is back in the recovery mode after holding support at $36,000. A break above $38,000 will likely bolster the crypto to $40,000, a move that may trigger massive buy orders.

It is worth keeping in mind that the uptrend is supported by a golden cross pattern on the four-hour chart. The bullish pattern formed after the 50 SMA crossed above the 200 SMA, cementing the buyer positions in the market.

Don't miss: Is Bitcoin A Good Investment & Should I Invest In Bitcoin?

Ethereum seems to be gaining traction after holding onto short-term support at $2,150. The support was instrumental in stopping losses from extending to $2,000. With the support in place, Ether has jumped above $2,000 and may soon step past $2,300.

Similarly, the bullish outlook will be reinforced by an incoming golden cross pattern on the four-hour chart. As the 50 SMA crossed above the 200 SMA, the odds for an optimistic breakout will surge. Note that buyers have their eyes on $2,400; a region, if broken, may trigger price action toward $2,800.

Santiment’s latest data also shows a sudden uptick in Twitter sentiment related to Ethereum. Perhaps the positive change occurred after the mid-summer jump from $1,730 to $2,400. Hence, investors are currently most positive regarding Ethereum for the first time since mid-May. 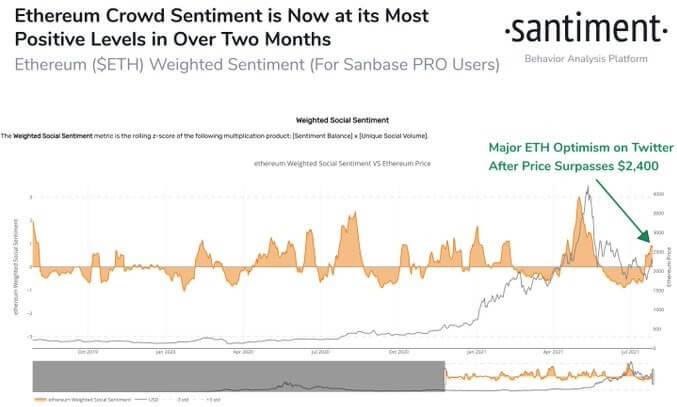 Check out: Why Ethereum Will Skyrocket

Since the crash last week, Ripple has been on an upward roll, with gains forming within an ascending parallel pattern. However, the bullish mission failed in reaching the set goal at $0.7, paving the way for another minor correction.

XRP is dancing at $0.63 at the time of writing, while the 200 200 SMA supports the downside. A break above the channel’s upper trend line must occur to bolster Ripple toward $0.7. Perhaps, trading above this barrier would bring the cross-border to an ultimate rally eyeing $1.

On the flip side, the Moving Average Convergence Divergence (MACD) bearish signal may invalidate the expected upswing to $0.7. Moreover, bulls are already struggling with the resistance at $0.65; thus, overhead pressure may continue soaring in the near term. Support at the 200 SMA may limit the bears’ efforts, but losses under $0.6 are expected to extend to $0.52.