The cryptocurrency market saw the stability built throughout the week disappear like dust in the air following a tweet by the founder of Tesla, Elon Musk. In the tweet, Musk quotes Link Park's hit track "In the End," suggesting that the relationship is over and it didn't matter. The tweet would not have meant much, but Musk added a Bitcoin hashtag and a broken heart emoji.

Meanwhile, the market reacted with BTC correcting from $39,000 to $36,000. The bearish wave spread across the market, with most crypto assets posting double-digit losses. Ethereum retested support at $2,600 after rising above $2,800 on Thursday. The cross-border transfer token XRP lost support at $1 and revisited the next anchor at $0.9.

The CEO of Binance, Changpeng Zhao (CZ), indirectly called out Elon Musk for his humorous comments. In a tweet, CZ stated:

Great power with random "humor," not great, and not funny."

Many crypto enthusiasts have resorted to blocking the billionaire on Twitter, implying that his contribution to the space is unwanted. However, Elon Musk has come to be known as the "Dogefather" based on his support for Dogecoin. He compared Dogecoin to the US Federal Reserve not long ago, inferring that both have an unlimited supply of circulating money.

Bitcoin was rejected at $39,000 after the market reacted to Musk's tweet. The correction extended to $36,000 after failing to hold at the 100 Simple Moving Average and the 50 SMA on the four-hour chart.

Meanwhile, BTC trades at $36,600 amid the push to resume the uptrend. The SuperTrend indicator recently flashed a buy signal, suggesting that investors take long positions. If the call to buy sustains, an increase in the tailwind force could see the bellwether cryptocurrency resume the journey toward $40,000. 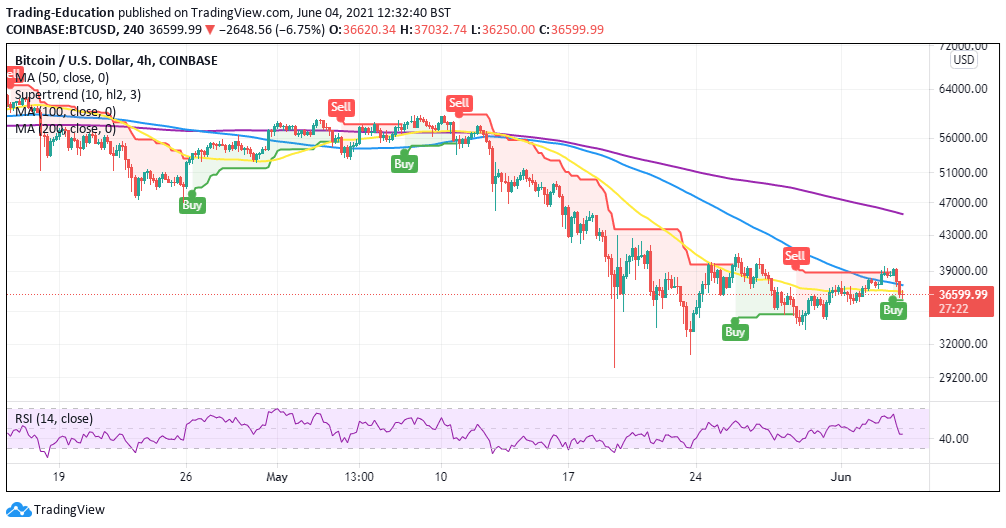 Traders must be aware that Bitcoin is not out of the woods yet. Therefore, declines may extend under $36,000. Closing the day under the current immediate support could trigger massive sell orders as investors panic sell before the price dips toward $33,000 and $30,000.

Ethereum bulls thrown out of balance

Ethereum teeters at $2,230 at the time of writing. This comes after a freefall from highs above $2,800. However, confluence support formed by the 50 SMA and the 100 SMA stopped the bearish advances from causing more damage to the accrued gains since the drop to $2,200 last weekend.

It is imperative that that Ether makes a daily close above the confluence support. The uptrend to $3,000 will remain a threatened endeavor unless bulls regain the lost ground at $2,700 and $2,800, respectively, in the near term. 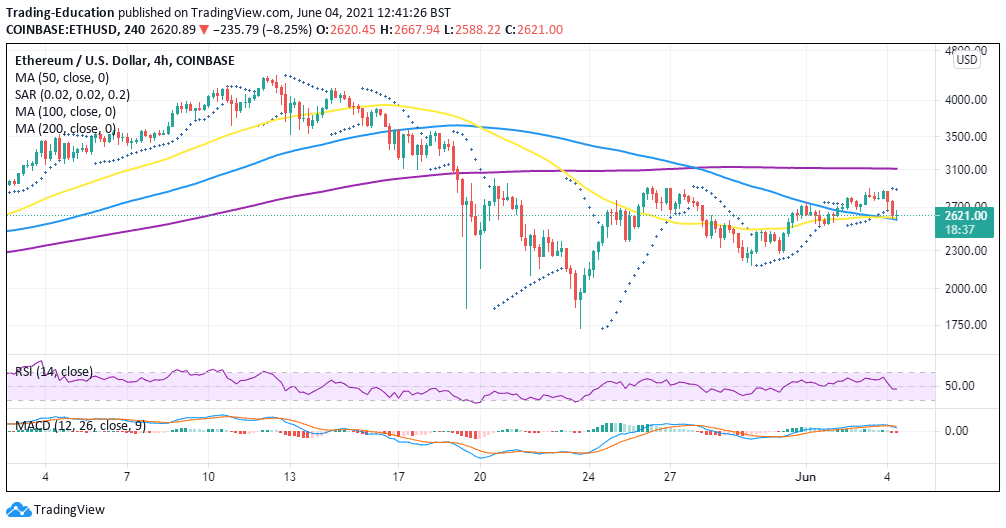 According to the Moving Average Convergence Divergence (MACD), the general technical picture has a bearish impulse. It means that sell orders could spike at any time, especially if the immediate support breaks. Support is envisaged at $2,300 and $2,000 if overhead pressure rises.

Ripple pulls back to the drawing board

The international money transfer token retested support at $0.9 after succumbing to the selling pressure in the market on Friday. The declines deemed the hope of recovering to $2 again.

In the meantime, Ripple trades at $0.93 while bulls fight a seemingly losing battle at the 50 SMA. Breaking above this level will bring XRP to the next resistance at $1, as highlighted by the 100 SMA.

The MACD adds weight to the bearish narrative amid the move toward the negative region. If the MACD line's divergence beneath the signal line expands, more pressure will be channeled on the support at $0.9. Losses could also stretch to $0.8 if the technical picture remains unchanged. 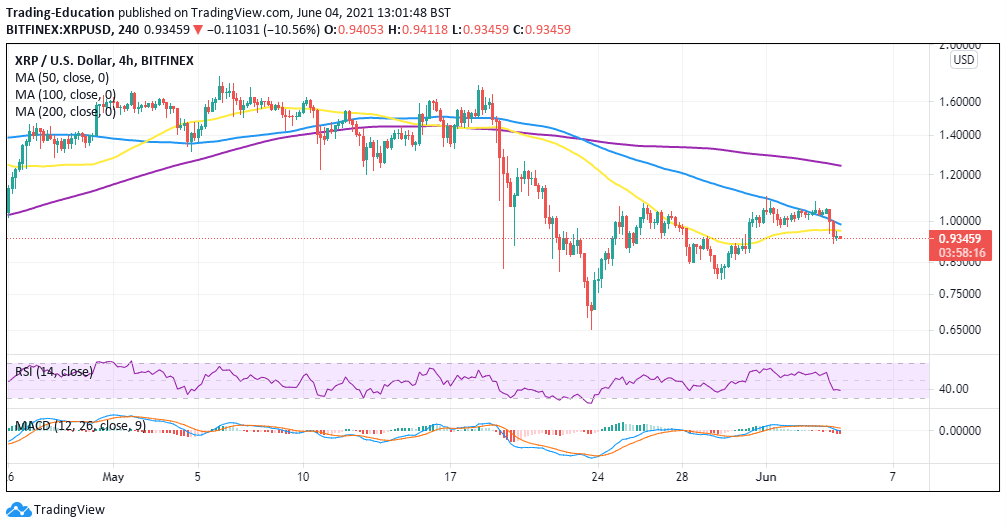 Ripple is not oversold yet so bears still have room to play. However, if the RSI bounces at 40, a sideways trading action will be a welcomed move for investors. Recovery above the midline may call back buyers as investors look forward to the uptrend building traction again.