Bitcoin appears to be struggling to make headway toward $50,000, following another dip under $44,000 on Monday. The flagship cryptocurrency suffered a significant drop last, triggering considerable losses across the market.

Ethereum was not spared the ax, as it plunged from high around $4,000 to $3,200. Cardano, which successfully launched smart contracts last week, thought the Alonzo hand fork drifted from highs above $3, testing lows of $2. Similarly, Ripple lost ground to $0.92 barely days after rising to $1.4.

Some selected altcoins continued with the uptrend, such as Solana’s recent rally to $172 in the wake of the losses to $150. Avalanche also lifted to new all-time highs of $67 as the market wallowed in rising overhead pressure. As reported, the token is dancing between $50 and $60 amid a seemingly growing bearish outlook.

The bellwether cryptocurrency is teetering at $45,956 at the time of writing. A persistent push by the bulls to clear the resistance at $46,000 following the downswing beneath $44,000 on Monday has run out of steam. The 50 Simple Moving Average (SMA) adds credibility to the bearish outlook at $46,000.

A four-hour close above $45,000 is required to validate the bulls’ presence in the market. Realize that closing the day under $46,000 leaves the immediate support vulnerable. Besides, losses will likely gain traction if this buyer congestion zone fails to hold.

It is worth mentioning that the 50 SMA has crossed below two longer-term moving averages, including the 100 SMA and the 200 SMA. Although this is not a death cross, it infers that the downtrend will keep gaining traction in the coming sessions.

Nonetheless, all is not lost for Bitcoin regarding the uptrend’s continuation in the near term. The Moving Average Convergence Divergence (MACD) indicator has a vivid bullish signal that came into play when the 12-day EMA crossed above the 26-day EMA. If the MACD closes the gap to the mean line and steps into the positive region, Bitcoin will shrink the distance to $50,000.

Read more: What Might Happen if You Invest $100 in Bitcoin Today?

Ethereum is on the verge of a significant upswing toward $4,000 if the resistance at the 200 SMA comes out of the way. The gigantic smart contracts token is teetering at $3,340 at writing following the most recent rally from the support highlighted at $3,200.

The Same uptrend appears to have been validated by the Relative Strength Index (RSI) on the four-hour chart. With the RSI crossing into the overbought region, the odds for an uptrend to $4,000 will increase significantly.

According to Etherscan, the Ethereum network hash rate has made an all-time high while the daily hash rate rose to 715k GH/S. The hash rate shows the power dedicated to mining and validating transactions of the network. 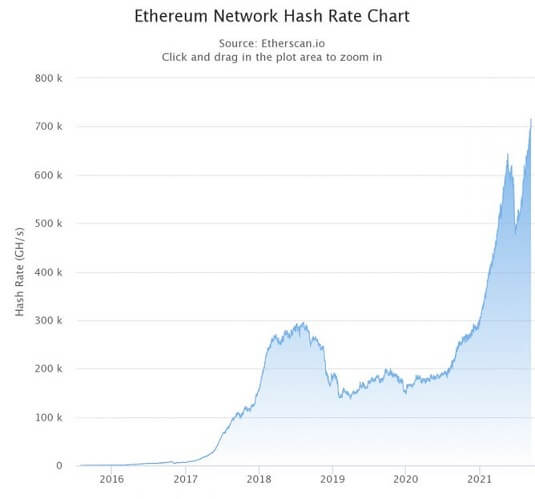 Don't miss: Best Methods On How To Earn Ethereum Fast

Ripple recovered from $0.92 after the losses witnessed in the previous week. After stepping above $1, it became apparent that recovery was in the offing. However, a barrier at $1.1 stalled the uptrend; thus, leaving XRP on the drawing board.

In the meantime, XRP is trading at $1.07 while bulls work on gaining ground to $1.4. The MACD hints at the bullish grip strengthening in the coming sessions. Realize that the 12-day EMA is holding above the 26-day EMA, which signals investors to increase their stakes.

A daily close above $1.1 will bring Ripple closer to $1.2 and perhaps trigger another run to $1.4. On the flip side, support at $1 will ensure that focus stays on gaining higher ground.