Ethereum has hit several milestones this week, like trading a new all-time high of $4,370 and the market share rising to half a trillion dollars. Intriguingly, Ethereum miners have earned more revenue compared to Bitcoin miners in the past few days.

Data by the Block reveals that Ethereum miners currently average $77 million in revenue every day while Bitcoin miners earn roughly $67 million. However, it is essential to keep in mind that this data has been analyzed on a seven-day moving average; hence it is a short-term trend. Moreover, this is not the first time this phenomenon has occurred because Ethereum miners earn more in February and April. 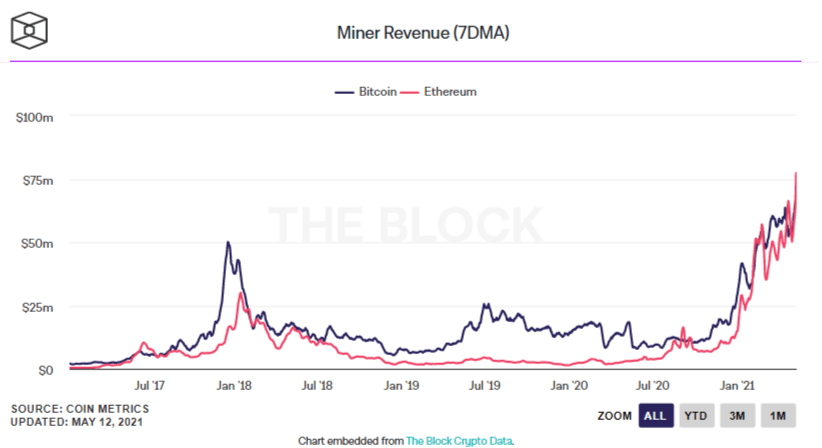 Ethereum retests support at $4,200 amid the increase in market share

Ethereum is getting a lot of attention from retail and institutional investors, a factor explaining the continuous uptrend over the last several weeks. The recent upswing past $4,000 put Ether on global headlines as Bitcoin and Ripple struggled.

Meanwhile, Ether’s market cap hit highs above $500 billion for the first time in history. This is a colossal milestone, especially with Bitcoin’s market cap stalling slightly above $1 trillion. If Ethereum continues with the current growth pattern, the predictions of ETH becoming larger than Bitcoin could materialize.

At the time of writing, Ethereum trades at $4.285 amid a subtle correction from the record high of $4,370. Technical indicators like the Relative Strength Index (RSI) hint at the retreat gaining momentum.

Support has been established at $4,200 and may play a vital role in the resumption of the uptrend. However, if broken, Ether will possibly extend the bearish leg to test the following anchors at $4,000 and $3,600, respectively. 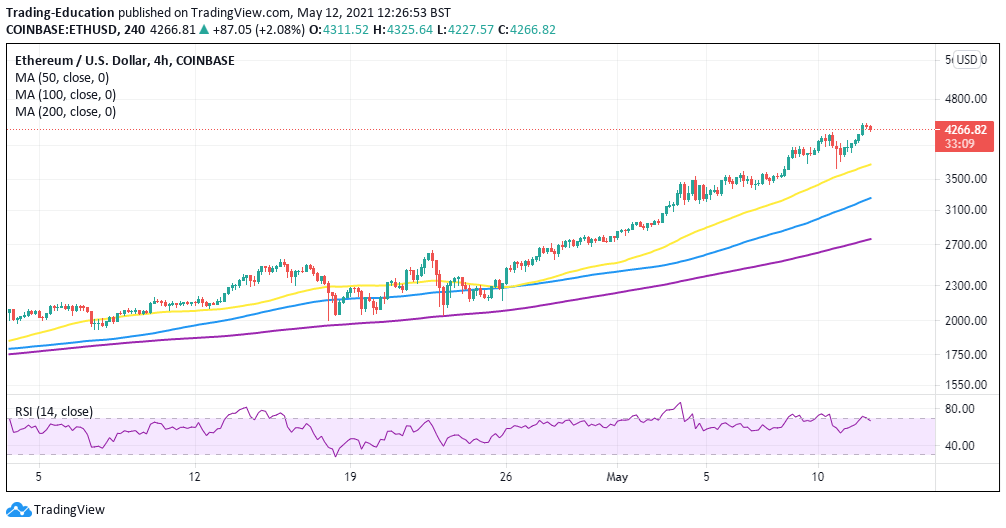 Bitcoin struggles with the uptrend despite spike whale accumulation

Bitcoin’s failure to break above $60,000 has put more pressure on support levels toward $50,000. A recent attempt to overcome the hurdle at $58,000 was not successful, forcing the bellwether cryptocurrency to seek refuge at $54,000.

Bitcoin is exchanging hands at $56,249 at the time of writing, while the immediate downside is protected by the 100 Simple Moving Average (SMA) on the four-hour chart. This support must hold to avert potential losses back to $54,000. If the downtrend gains traction, Bitcoin will tumble to $50,000 and $47,000, respectively. 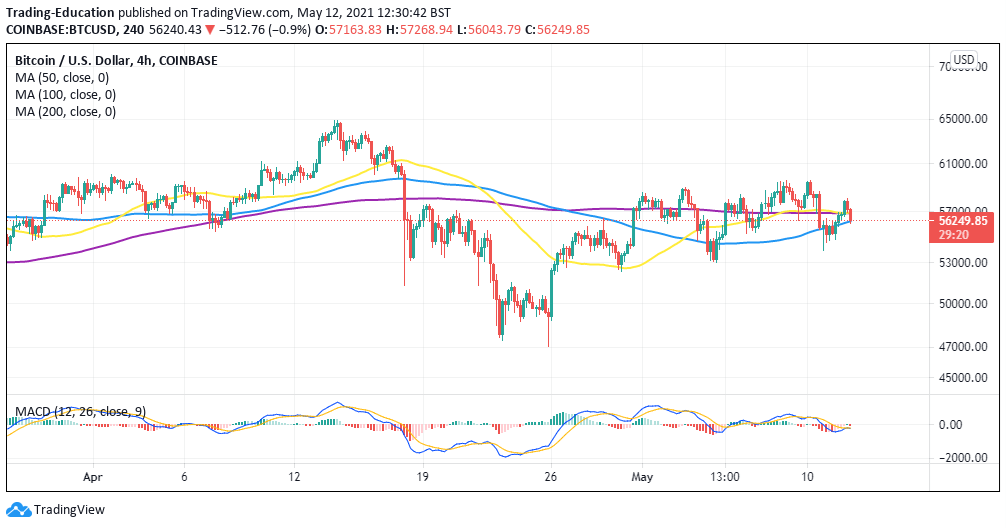 Despite the struggle with recovery to $60,000, Bitcoin accumulation has ballooned throughout 2021. Data by Glassnode indicates that whales have continued to deplete BTC supply on over-the-counter (OTC) desks. Institutional investors absorbed most of Bitcoin supply in 2021. Moreover, miners are back to a steady accumulation pattern. 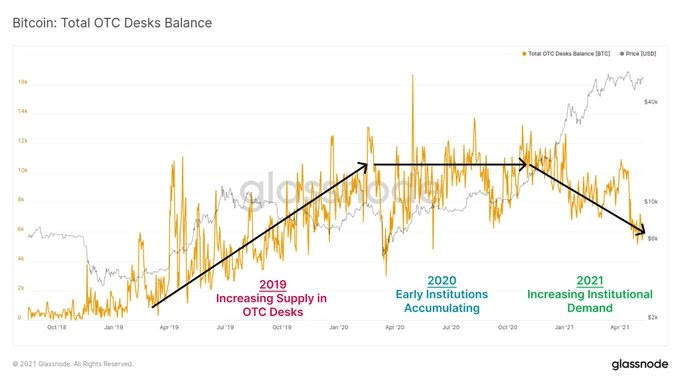 Ripple consolidates amid a delayed breakout

The international money remittance token has stalled under $1.6 while support is provided at $1.2. All bullish advances aiming for $2 have been thwarted, leaving XRP to settle for a sideways trading action, as confirmed by the Bollinger Bands (BB).

Ripple is trading at $1.45 at writing after losing the BB middle boundary support. A bearish impulse could disrupt the consolidation if left unchecked. Moreover, as the bands squeeze, the crypto asset nears a breakout.

Consequently, a recovery above the middle boundary is crucial to assume the bullish outlook and build the uptrend toward $2. Price action past $1.6 may trigger massive buy orders to sustain the gains. 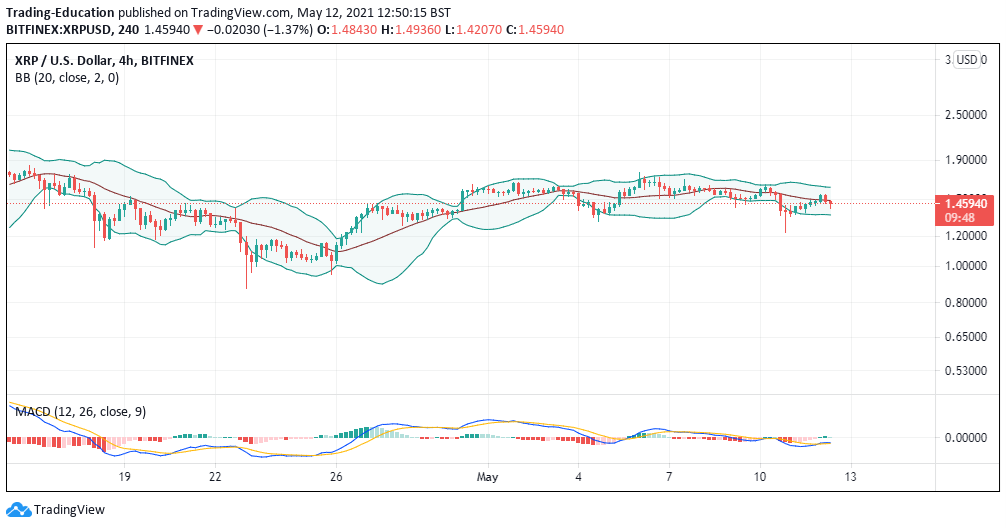 On the downside, if short-term support at $1.4 gives in to the overhead pressure, Ripple may settle for a downtrend. The primary support at $1.2 is in line to prevent losses from stretching to $1 and $0.85. For now, the least resistance path is sideways, as observed from the MACD on the four-hour chart.