The cryptocurrency market is dotted red and green after most digital assets' recoveries took premature breathers. Bitcoin topped out at $35,000 before revising the support at $32,000, while Ethereum stalled at $2,000.

Ripple has not been able to break above $0.7 but seems to hold support at $0.62. Most altcoins currently post single-digit losses except a few that are still in the green. Crypto assets such as Binance Coin, Cardano, and Dogecoin are up 3%, 5.7%, and $7.3%, respectively. As stability crawls back to the market, recoveries are expected to gain traction.

An announcement by Ethereum's lead developer Tim Beiko on Thursday affirmed that the network's London hardfork had been executed. It is one of the most anticipated upgrades in 2021 and includes the controversial Ethereum Improvement Proposal (EIP) 1559.

According to Beiko, the activation took longer than expected, but all the same, it was a success. The subsequent development is to implement the same on the Goerli test network on Rinkeby ahead of the activation on July 7.

The implementation of EIP 1559 will come as a reprieve for the high gas fees users are forced to cope with. However, some miners continue to object to its execution.

Meanwhile, Ethereum remained under $2,000 despite the development news ahead. Perhaps its impact will kick in later as the EIP 1559 starts functioning.

At the time of writing, Etherum trades at $1,950 after losing ground from $2,000. Support at $1,850 is supposed to halt the bearish advances and give upward price action in the coming sessions.

Note that Ethereum must break above $2,000 to ascertain the bullish outlook, propping for a recovery toward $3,000. More delay is expected at $2,550 and $2,800, respectively, as observed on the four-hour chart. 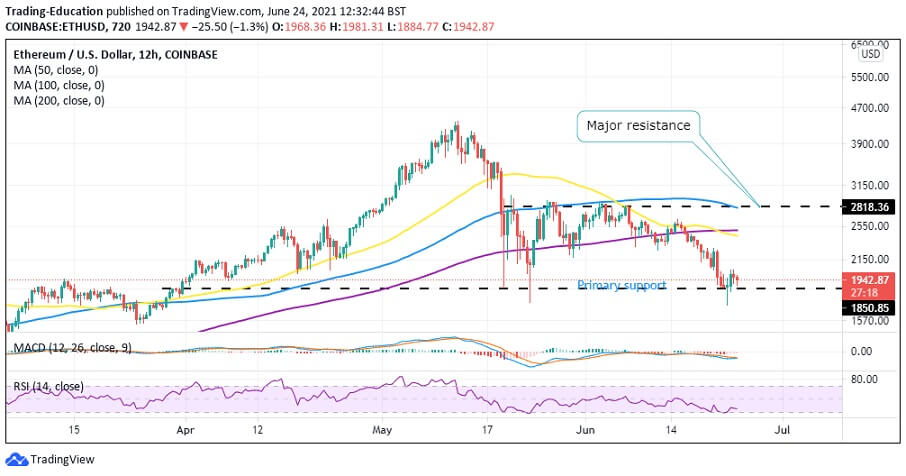 Read Also: Will Ethereum Make Me Rich In Ten Years?

Bitcoin price eyes another pulldown to $30,000

Bitcoin price recovery from levels marginally under $30,000 faded at $35,000. At the time of writing, $33,000 is functioning as the immediate support. However, the uptrend does not seem to have the strength to progress, let alone break the hurdle at $36,000, as highlighted by the 50 Simple Moving Average (SMA).

Meanwhile, the downward price action is becoming apparent based on the Relative Strength Index (RSI) movement. If the trend strength indicator returns to the oversold region, the bearish grip will tighten, pulling Bitcoin back to $30,000. 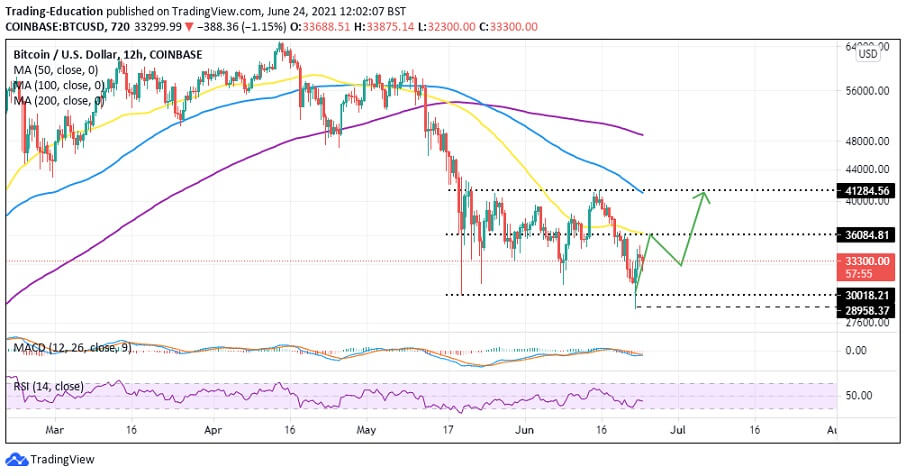 On the upside, the Moving Average Convergence Divergence (MACD) indicator may present a buy signal in the coming sessions. This call to buy will appear as soon as the MACD line (blue) crosses above the signal line. With this in place, bulls may get backing from other buyers and resume the uptrend toward $40,000.

Ripple recovered from $0.52 but slowed down slightly under $0.7. Higher support formed at $0.62, allowing bulls to remain in control. Thus, XRP is trading at $0.65 amid a growing urge from the bulls to close the day above $0.7.

The short-term technical levels show that buyers have the upper hand, especially after the MACD line crossing above the signal line. Similarly, the uptrend will solidify if the MACD moves into the positive region. 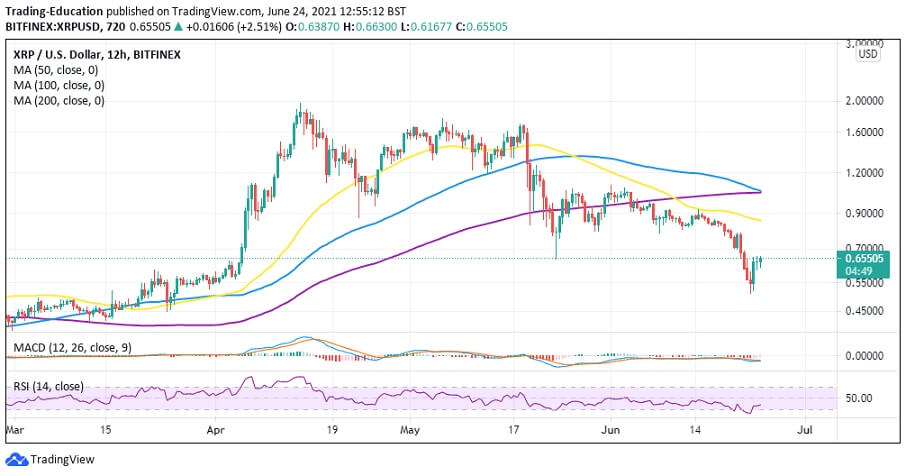 The RSI has reinforced the bulls' growing aggressiveness. Its rebound from the oversold region shows that buyers have the upper hand, while a break above the midline and toward the oversold territory will prove to investors the only way is up, at least for now.

Check Out: 5 Reasons Why Ripple Could Double Your Money