The cryptocurrency market is a sea of red following an unexpected mid-week selloff. Overhead pressure transversed the market, with most altcoins posting double-digit losses. Some of the biggest losers include Uniswap, Theta Network, Cosmos, and Tezos.

Bitcoin briefly lost support at $32,000, but the bearish leg eyeing $30,000 was cut short, allowing bulls to push for a minor recovery. On the other hand, Ripple has reclaimed the position above $0.61 in the wake of losses to $0.59.

According to the on-chain analysis platform Santiment, Ethereum's top ten most prominent addresses currently own the highest share of the pioneer altcoin's total supply since May 2017.

Over the last two months, large volume holders, commonly referred to as whales, have added 2.12% to their holdings, bringing the percentage to 20.58%. Note that their holdings had dropped to 18.46%, following the all-time high of $4,500.

While this increase does not directly point toward an immediate uptick in Ethereum price, it could show that a bottom in and investors may strap in for a sustained recovery in the short term. 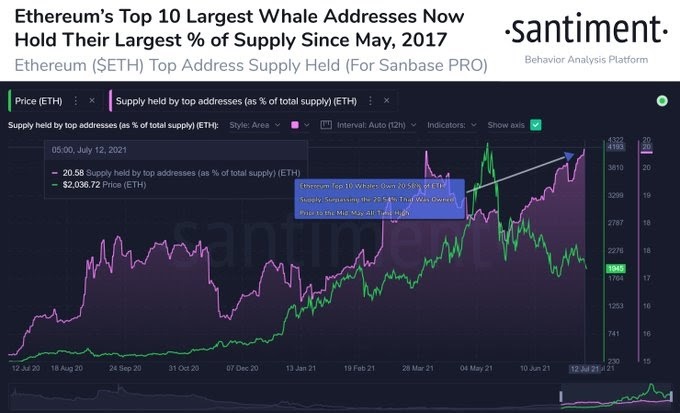 Meanwhile, Ethereum is trading at $1,950 after retesting support at $1,880. The correction gained momentum after Ether closed the day below $2,000. However, a recovery seems underway, with bulls reaching $2,000 in the near term and later $2,200.

A buy signal from the TD Sequential indicator adds credibility to the expected upswing above $2,000. Note that this call to buy Ether manifested in a red nine candlestick. It suggests that bearish pressure is fading, allowing the bulls to push ETH higher.

Bitcoin price extended the bearish leg from the trading on Tuesday, exploring levels under $32,000. Nonetheless, new support established at $33,600 allowed buyers to find stability and stop losses that may retest areas below $30,000.

At the time of writing, Bitcoin teeters above $32,400 while bulls concentrate on breaking a primary barrier at the descending parallel channel's middle boundary. A break above this level will make the uptrend apparent and perhaps bolsters BTC toward $34,000

For a sustained recovery, the Moving Average Convergence Divergence (MACD) indicator must flash a buy signal. Therefore, traders need to watch out for the MACD line (blue) crossing above the signal line to validate the impending uptrend.

It is worth noticing that Bitcoin is not out of the woods yet. Hence failure to close the day above the channel's middle boundary may lead to another round of declines toward $30,000.

Ripple Bears Unlikely To Give Up Until Price Hits $0.48

Ripple price tested areas below $0.6 but immediately gained ground, lifting above $0.61. Despite the upswing, bulls seem to have lost the steam, resulting in a sluggish move north. At the time of writing, XRP can barely hold above $0.6, risking a massive drop to $0.48.

Earlier, we discussed a descending triangle pattern that could send Ripple under $0.5 to $0.48. This breakout will be confirmed if XRP loses support at $0.6 again. A spike in volume will be indicative of a 20% downswing, as illustrated on the chart.

The MACD also has a bearish outlook adding credence to potential correction. Hence, a daily close below $0.6 may accentuate the bears' grip on Ripple.

Read Also: How Much Will XRP Be Worth In The Next 5 Years?