Bitcoin price is unable to come up for air amid surging selling pressure. These headwinds are not unique to the flagship cryptocurrency but keep dragging the entire market south. For instance, Ethereum recently abandoned the bullish bid for $2,400, dropping to seek support at $1,850. At the same time, Ripple was forced to explore levels to $0.58 and currently remains pivotal at $0.6.

The intensifying selling pressure is likely due to a massive inflow of Bitcoin into Binance, one of the leading cryptocurrency exchanges by volume globally. According to CryptoQuant, a platform known for on-chain metrics analysis, roughly 14,550 BTC was sent to Binance in the last 24 hours. Note that 4,518.4 BTC inflow occurred in an hour, making the exchange’s largest single-hour inflow of Bitcoins since May 20. 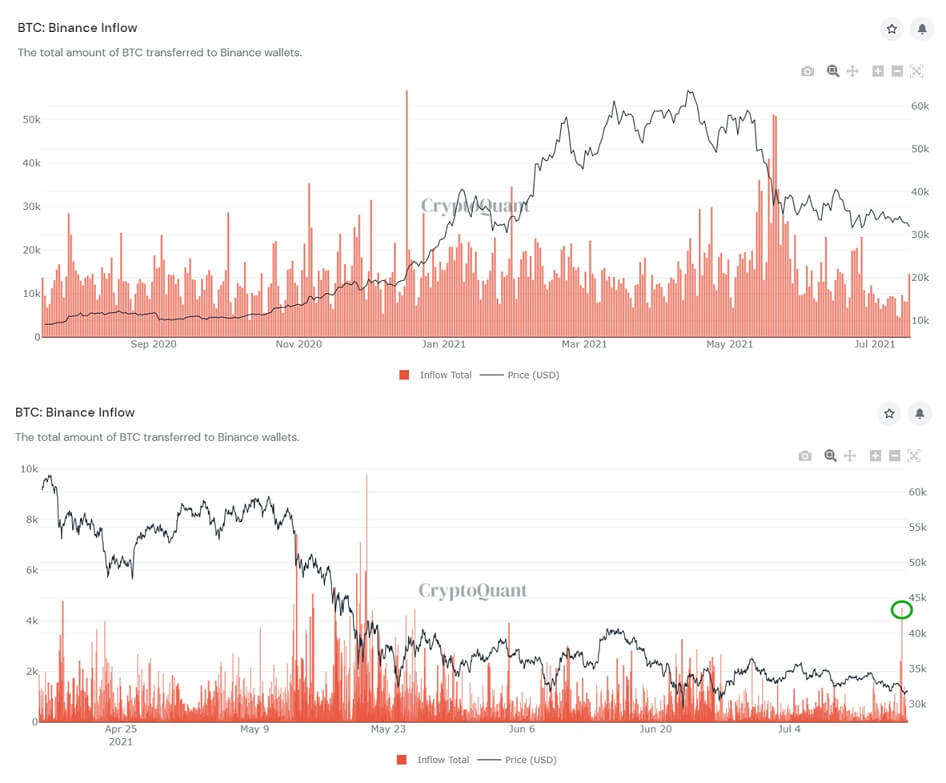 An uptick in exchange inflow implies an immediate increase in selling pressure. Hence, Bitcoin price recovery in the near term could be a farfetched idea.

At the moment, Bitcoin is inclined to fall to another monthly low, especially with selling pressure becoming apparent with the surge in inflows on Binance. Therefore, a daily close under $31,000 could trigger more losses, pushing BTC to $30,000 and perhaps $265,000.

Ethereum price is still trapped in the bears’ hands two days after rejection at $2,200. Initially, support at $1,850 allowed bulls to briefly take control, pulling Ether to $2,000.

However, it became increasingly challenging to sustain the uptrend. Thus, another correction swung into the picture, with losses extending to Friday.

At the time of writing, ETH teeters at $1,865 while bulls fight tooth and nail to hold the support at $1,850. Nonetheless, the hovering selling points at the bearish leg stretching to $1,750.

Note that this level provided support for Ethereum during the selloff in June. With bulls back on the drawing board, an uptick in volume will be triggered, as Ethereum is pushed to close the gap at $2,000.

According to Santiment, Ethereum bulls are longing for a spike in active deposits and active withdrawals coming from known wallets. Amid the mini bounce to $2,000, these metrics saw a brief rebound, but the momentum fizzled out immediately. Therefore, a consistent spike in active withdrawals and active deposits could see a sustained uptrend in Ethereum price.

XRP worked around the clock to bring the price from a weekly low of $0.58 and stepped above $0.6. However, another gust of wind is descending on the buyers as selling continued despite Ripple striking another win in court. As reported, a US Judge allowed Ripple attorneys to depose A former SEC official on his decision why Ethereum is not a security.

Meanwhile, Ripple is back to under $0.6 and fight for higher support, preferably at $0.58. Additionally, an ascending parallel channel’s middle boundary provides XRP with more support. Holding at this level will enhance the bulls’ influence in the market and bolster Ripple above $0.6.

On the downside, closing the day beneath the support mentioned above may trigger more sell orders, thus stretching the bearish leg toward $0.5. Perhaps a drop of this magnitude will allow investors to take advantage of the low prices and increase the tailwind for gains eying $0.7.

Read Also: Will Ripple Make Me Rich in 10 Years?