Dogecoin has significantly swung upward after Elon Musk, the “Dogefather” asked his fans on Twitter if Tesla should consider accepting payments in Dogecoin for its vehicles. Musk is the founder and CEO of the vehicle manufacturer behemoth and is known for his undying love for the meme coin.

Musk carried out a poll on Twitter on whether people want Tesla to accept DOGE. The post attracted tremendous responses over more than 400,000 in just ten minutes and currently stands at 1.6 million at the time of writing. At the moment, 76.7% of the respondents agreed that Tesla should accept DOGE while 23.3% responded “No.”

As expected, Dogecoin rallied past $0.5 from lows around $0.41. However, the generally sluggish cryptocurrency market action on Tuesday has made it difficult to sustain the upswing with DOGE losing 3.6% on an hourly basis and 2.1% in 24 hours.

The flagship cryptocurrency dropped sharply during the US trading session Monday. The bearish wave trickled into the Asian session on Tuesday. However, the European session has seen the market calm amid support at $54,000.

At the time of writing, Bitcoin trades marginally above $55,500. The bulls struggle to settle the price above the 50 Simple Moving Average (SMA) on the four-hour chart. The confluence resistance formed by the 50 SMA and the 200 SMA may delay recovery targeting $60,000.

Meanwhile, the Moving Average Convergence Divergence (MACD) reveals that BTC is not out of the woods yet. The MACD has broken the mean line support and is currently in the negative territory. Moreover, the MACD line (blue) appears to widen the divergence under the signal thus adding credence to the bearish outlook. 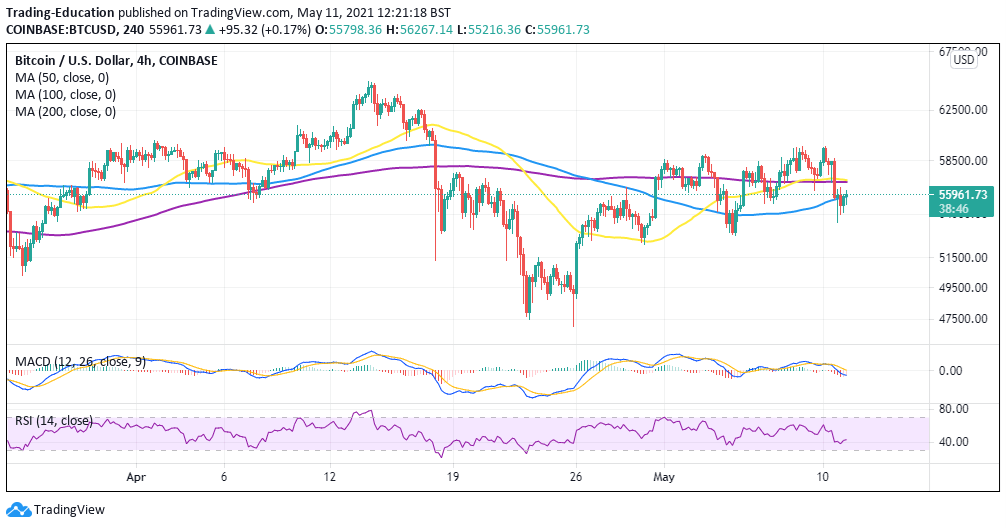 It is worth keeping in mind that Bitcoin may continue with the uptrend based on the Relative Strength Index (RSI). If support at 40 remains intact the RSI will begin to move upward, thus building the bullish outlook for gains eyeing $60,000.

The gigantic smart contract token has recovered to levels above $4,000 in the wake of losses to $3,600. Ethereum has bowed to broad-based declines in the Market, hence the rejection from the all-time high of $4,216.

Trading above $4,000 again is a bullish signal likely to encourage investors to increase their stakes in the token amid speculation for gains above $5,000. Meanwhile, short-term technical pictures are improving in support of the uplift.

The RSI is pointing upward after rebounding from the midline. A sustained movement to the overbought region (beyond 70) may result in a stronger bullish grip, as Ethereum extends the bullish leg to $5,000. 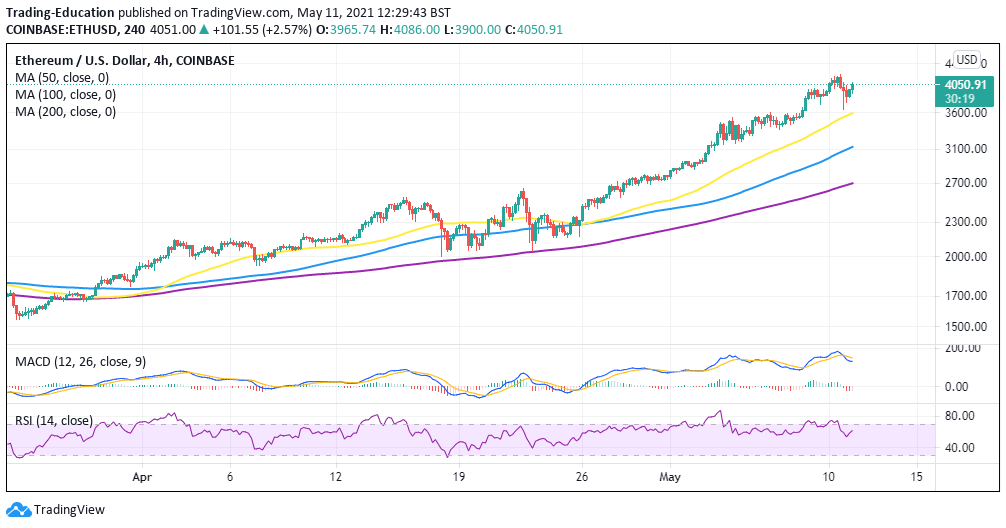 Note that the MACD still has a bearish impulse and may lead to an increase in overhead pressure. It also means that if support at $4,000 is not strong enough, Ether will revisit the support at $3,600 or the 100 SMA before the uptrend resumes again.

Ripple trades at $1.44 at the time of writing. The 100 SMA limits movement immediately on the upside while the 200 SMA is in line to provide support. Settling above the 100 SMA will play a key role in securing the uptrend initially to $1.6 and later to $2.

The four-hour chart also highlights a bullish ascending triangle. As discussed earlier, this is a bullish continuation pattern. If it materializes, Ripple could spike to $2.5 upon breaking the triangle’s x-axis resistance.

The RSI adds weight to the ongoing gradual recovery after rebounding from the oversold region at 30 and closing the gap heading to the midline. 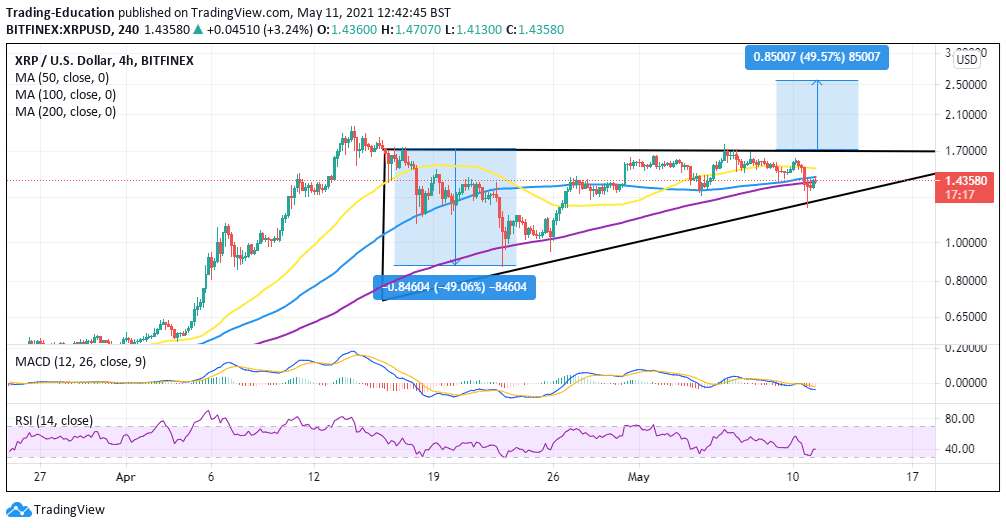 Like Ethereum, the MACD has a bearish outlook. Therefore, traders must be cautious, perhaps wait for a confirmed breakout before going all-in on XRP. Closing the day under the 200 SMA could lead to a surge in selling pressure, leaving support at $1.4 vulnerable to losses. Moreover, testing support at $1.2 could trigger massive losses as Ripple explores levels under $1.