Ripple has lifted higher nearly 10% ignoring the bearish chatter across the market. The spike comes after the CEO of Ripple Labs Inc., Brad Garlinghouse, said in an interview with CNBC that the ongoing court battle with the United States Securities Commission (SEC) was “frustrating.”

Garlinghouse reckons that other countries like Singapore and South Korea have strived to bring clarity by defining cryptocurrency regulations. However, the US is the only nation globally labeling XRP as a security. According to the CEO, the regulators in the US “have not provided that same clarity.”

Meanwhile, the cryptocurrency market is dotted red and green, with most crypto assets experiencing sluggish price action. Bitcoin trades under $55,000 after the bullish momentum eyeing gains to $60,000 weakened. Ethereum holds above $2,700 following a correction from the historical high of $2,800.

Bitcoin is dancing slightly above $54,400 at the time of writing. On Thursday, the bullish outlook failed to materialize, with Bitcoin stalling under $55,000. On the downside, support at the 50 Simple Moving Average (SMA) keeps bears in check.

Meanwhile, the four-hour chart brings to light an inverted head-and-shoulders (H&S). The pattern is massively bullish and, once confirmed, can lead to a significant uptrend. Users watch out for a break above the neckline resistance on the right shoulder. Then upswing is usually affirmed by a spike in trading volume.

Bitcoin needs to reclaim the ground above $55,000 and extend the price action past $55,000 to come out of the woods. Besides, price action beyond the 200 SMA may cement the bulls’ presence in the market, setting the pace for the uptrend to $65,000.

Ethereum rose to $2,800 for the first time in history; however, a correction ensued toward $2,700. In the meantime, bulls are keen on lifting to another record high, hence the recovery to $2,750. The SuperTrend Indicator has sustained a bullish impulse to set the precedence for higher price levels.

On the other hand, the Relative Strength Index (RSI) shows that Ethereum is inclined to bearish. The RSI’s gradual movement to the midline highlights the intensifying bearish grip.

Ripple focuses on $2 ahead of the weekend session

The cross-border value transfer token has defied the mundane trading in the market, lifting to highs around $1.6. The price action comes after a breakout from the ascending triangle discussed earlier. If the short-term technical picture, especially on the four-hour chart, remains intact, XRP will extend up leg closer to $2.

The MACD has flipped massively bullish, adding credence to the triangle breakout. In addition to the MACD line crossing above the signal line, the indicator explores higher highs in the positive region. 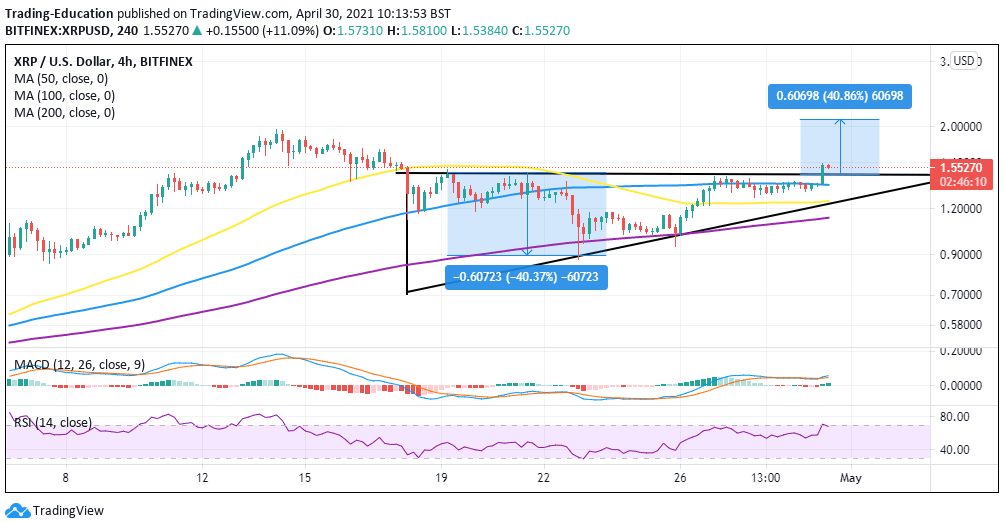 Support must be defended at $1.5 to keep the bearish advances at bay. On the downside, a correction will ensue if Ripple closes the day below this level. It would be detrimental to the progress made if the 100 SMA support breaks because XRP will be vulnerable to losses heading to $1.