Ethereum and Bitcoin lead the declines in the cryptocurrency market following the bearish wave from the weekend. The bellwether cryptocurrency smashed beneath the former support at $42,000 and stretched the losses below $40,000. Similarly, Ethereum has difficulty finding support; hence the short-term technical outlook hints at a drop to $2,000.

The rest of the cryptocurrency market bleeds at the time of writing, confirming the recent predictions from Wall Street that a significant reversal was imminent. Most of the crypto assets post double-digit losses based on a 24-hour timeframe. The extent of the bearish leg remains unknown and could be worse amid panic from investors.

It is barely a week since headlines flooded the space with news of Ethereum hitting all-time highs at $4,400. Investors speculated that the pioneer smart contract token would soon hit highs above $4,000 and begin on the journey of displacing Bitcoin from the largest cryptocurrency position by market capitalization.

However, a gradual retreat from the record highs coupled with instability due to the persistent Bitcoin losses pulled ETH into a deeper correction. Failure to close the day above $3,500 on Tuesday triggered more losses, forcing Ethereum to explore downstream under $3,000.

At the time of writing, Ether trades slightly above $2,600, following a reflex reversal from $2,400. Probably, the downtrend is far from over based on the prevailing technical picture.

For instance, the Relative Strength Index (RSI) and the Moving Average Convergence Divergence (MACD) have massive bearish impulses. Therefore, the down leg has the potential to extend to $2,000 before recovery comes into play. 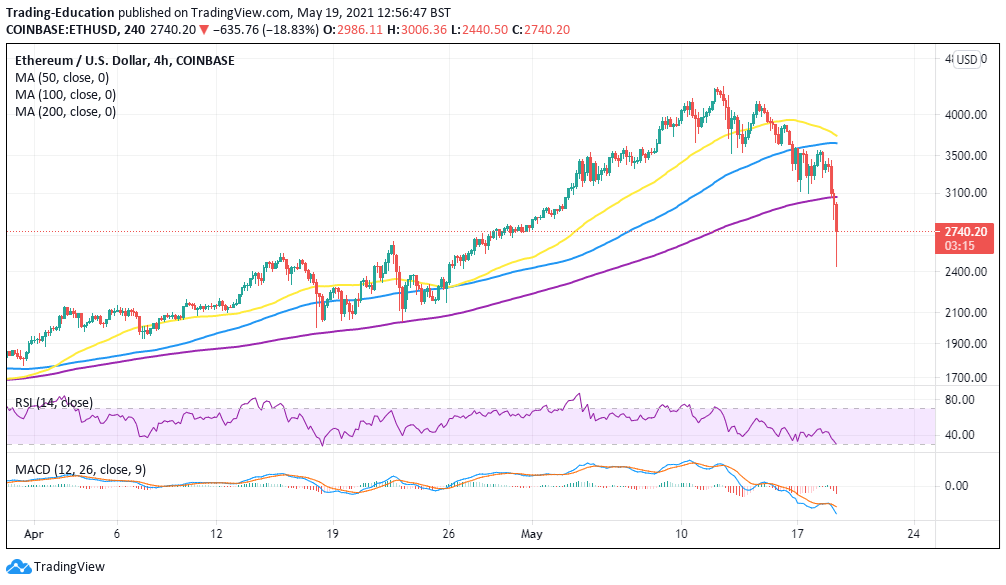 Bitcoin broke the support areas at $42,000 and $40,000 as discussed on Tuesday, confirming the bearish calls from Wall Street. The bearish leg has stretched to $36,200, spinning Bitcoin from bullish barely a month ago to highly bearish.

Before the ongoing breakdown, Elon Musk was accused of crashing Bitcoin. The accusation followed the news that Tesla had discontinued Bitcoin payments citing environmental issues connected to fossil fuels used in mining BTC and processing transactions.

Nonetheless, Bitcoin continued with the downtrend after the news from Tesla cooled down and Musk ascertained that his company had not dumped its BTC holdings.

At the time of writing, BTC trades at $38,800 amid a rigorous fight by bulls for an upward trend. The RSI is currently in the oversold region on the four-hour chart, perhaps a relief for the buyers in the sense that a recovery will soon be underway. 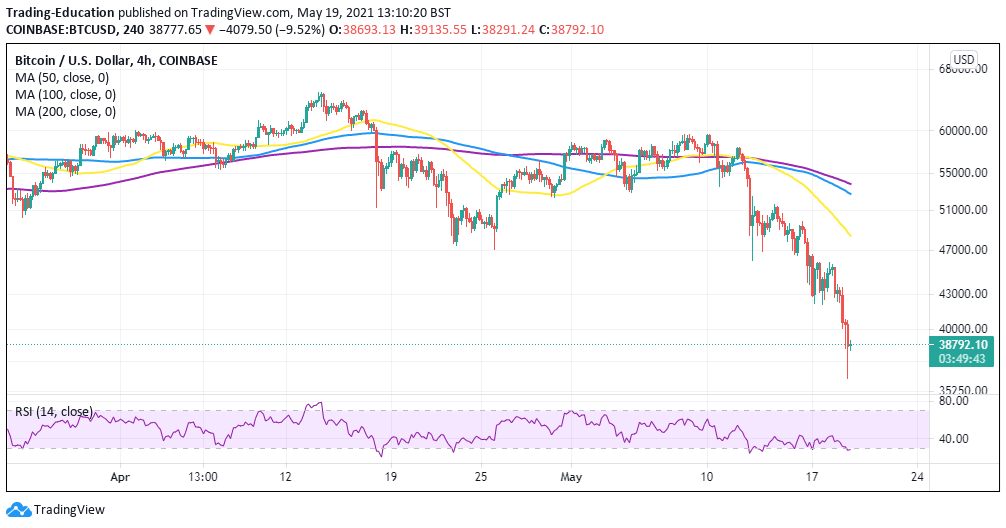 The cross-border money transfer token continues to surprise many as it calmly weathers down the extremely bearish advances in the market. A recent uptrend made above $10.6 but failed to build the price action beyond $1.7. Sellers took advantage of the weak bullish momentum coupled with a generally gravitating crypto market to push for losses under $1.2.

At the time of writing, XRP trades at $1.25 after recording minor losses among major crypto assets. Holding within the range of $1.2 to $1.6 could ensure that losses to $1 and $0.85 are deterred. 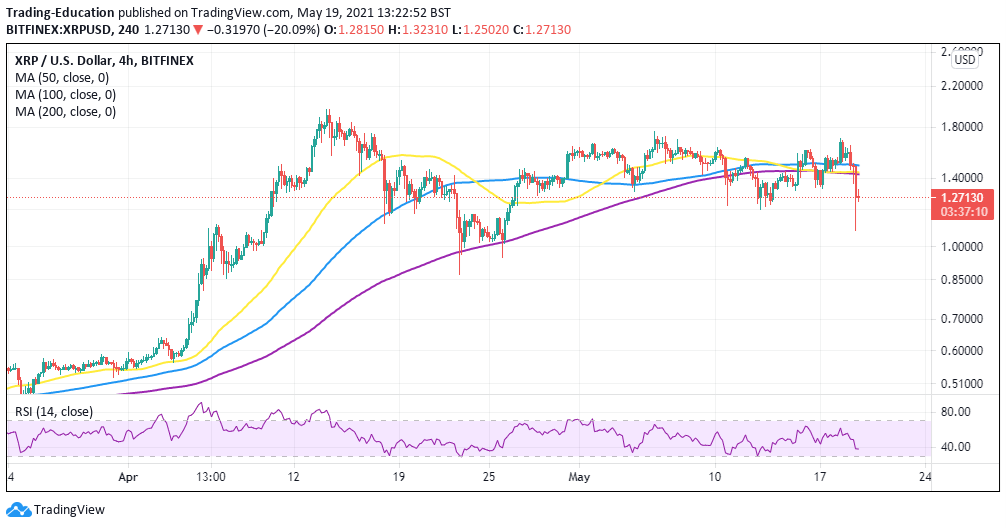 The RSI will validate a recovery if support at 40 is embraced. Closing the day above, the confluence formed at $1.4 by the 50 Simple Moving Average (SMA) and the 100 SMA will call more investors into the market as speculation starts building for gains eyeing $2.