In the wake of the corrections experienced across the market from Monday, selected crypto assets to change the narrative on Thursday, reporting impressive gains. Some of these tokens included Uniswap, AAVE, and Polkadot. Uniswap and AAVE rallied after Bitwise Investments launched new funds to expose Wall Street investors to the decentralized finance (DeFi) sector.

Bitcoin defended the support at $38,000 and tried to close the gap to $40,000, but a correction soon occurred, retesting the same level. On the other hand, Ripple has managed to hold above $0.7, but gains toward $0.8 remain a pipe dream.

The much-awaited and controversial upgrade dubbed London is taking place on the Ethereum network. Crypto enthusiasts have expressed their excitement for the upgrade, with EIP-1559 stealing the show. The heavily discussed proposal, EIP-1559, hopes to reduce the high gas fees on the network.

However, it is likely to reduce miner earnings because the base transaction fee collected will be burned after being sent to an unrecoverable wallet. The other proposals will focus on smart contracts and provide a framework for future upgrades ahead of Ethereum 2.0.

Ethereum price has closed the gap to $2,800 earlier in the day but met massive headwinds ahead of the hard fork. At the time of writing, Ether is trading above $2,600 while bulls build momentum for gains above $3,000.

A break past $2,800 will most likely bolster Ether past $3,000 as speculation hits the roof. Nevertheless, we are uncertain if Ethereum will sustain the uptrend because some investors could consider selling news and taking profits early.

The token’s downside is protected by the ascending parallel channel’s lower boundary. If this support holds, alongside the buyer concentration at $2,600, potential declines will be nullified.

Check Out: What's the Future of Ethereum?

After rising to test the barrier at $40,000 on Thursday, the bellwether cryptocurrency met a massive headwind, resulting in an immediate correction. The crucial support at $38,000 was tested for the second time this week, but bulls took refuge at this level.

Meanwhile, Bitcoin is pivotal at $38,000, whereby there is a harrowing fight between the bears and the bulls. Note that sustaining the price above this level would keep the focus at $40,000 and eventually allow buyers to control the price completely.

However, if losses close under $38,000, we expected the bearish calls to $35,000 to begin materializing. Notice that the Moving Average Convergence Divergence (MACD) indicator is bearish at the moment. The sell signal presented on August 2 still prevails, encouraging sellers to flock to the market.

Meanwhile, it is essential to keep in mind that Bitcoin exchanges outflows have just spiked, according to on-chain data by Santiment. As more holders take their coins off the exchanges, it indicates less selloff risk. Therefore, massive declines could be unlikely in the coming days while Bitcoin looks to cross the bridge at $40,000. 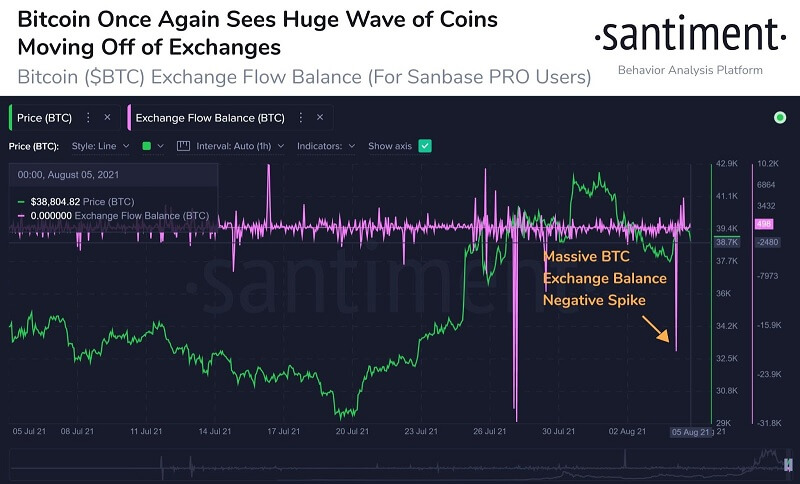 The cross-border money remittance token moves toward $0.7 after failing to endure the harsh journey to $0.8. Analysts anticipate a rebound at this crucial level, which will lead XRP into consolidation or trigger fresh gains.

Currently, the MACD is level at the mean line, implying that bullish and bearish pressure is relatively equal. Nonetheless, the Relative Strength Index (RSI) leans toward the bears emerging winners in this brawl.

If the immediate support shatters, losses will intensify toward $0.6. However, the 100 SMA and the 200 SMA are in line to prevent Ripple from falling sharply.