The cryptocurrency market is back in the green after a relatively gruesome weekend session. Bitcoin pulled the entire market into shambles following a second drop to $30,500.

The recent selloff has been linked to crackdowns on cryptocurrency activities in China. According to the experts, the operation was a reminder from the authorities of the heavily regulated nation that Bitcoin and other cryptocurrencies were not allowed.

In addition to the bloodbath in the market, businesses have been affected, with miners downing their tools. Some have resolved to relocate to other countries in the South American region. Cryptocurrency exchanges such as Huobi have announced a temporary suspension of services such as futures contracts and ETP.

As the crackdown cools, recovery seems to be taking shape in the market. For instance, Bitcoin is up 8.4% in 24 hours to trade above $37,000, while Ethereum shot up 13.5% and is currently exchanging hands above $2,400. The cross-border funds transfer token XRP has stepped above $0.9 after testing support at $0.7.

Technical levels in the four-hour timeframe have flipped bullish, starting with the Moving Average Convergence Divergence (MACD). After dropping to -2,800, the momentum strength indicator has begun the journey toward the positive region. Besides that, the bullish outlook is reinforced by the MACD line (blue) striking above the signal line.

On the other hand, establishing support above $38,000 is critical for sustaining the recovery beyond $40. With the backing in place, bulls will focus on lifting to higher levels. 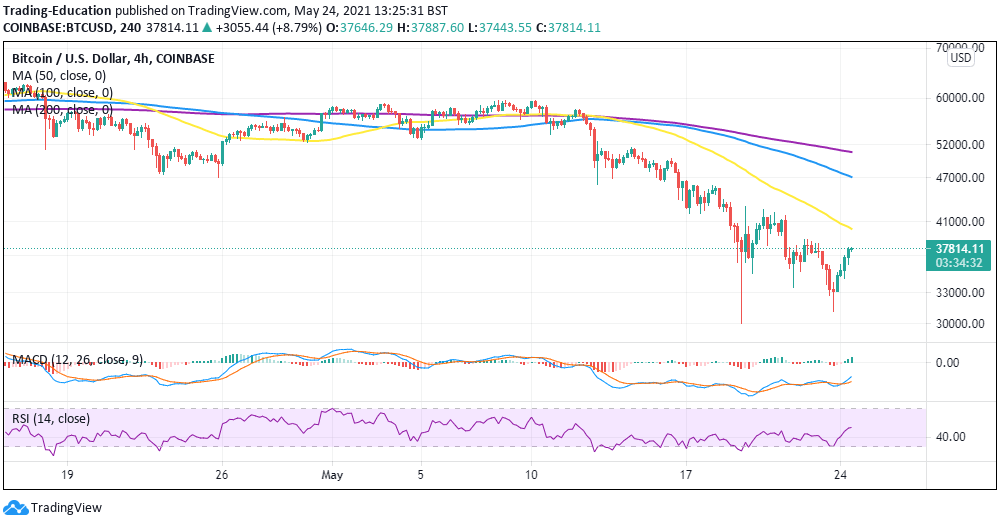 Read Also: 15 Reasons Why You Should Invest in Bitcoin Today

Ether plunged under $2,000 again, but this time, the bearish keg extended below last week’s support at $1,850. New support was established at $1,750, defending Ethereum from further breakdown. Bulls returned after the intense battering, pulling the price above $2,000.

At the time of writing, Ethereum trades slightly above $2,400 as buyers battle to close the gap toward $3,000. The 100-day Simple Moving Average (SMA) provides immediate support, encouraging bulls to focus on the recovery mission.

The TD Sequential indicator has flashed buy signal on the daily chart. This call to buy manifested in a red nine candlestick. Its appearance shows that the bears are getting exhausted; thus, allowing bulls to regain control. A break above $2,500 will likely trigger immense buy orders for gains eyeing $3,000. 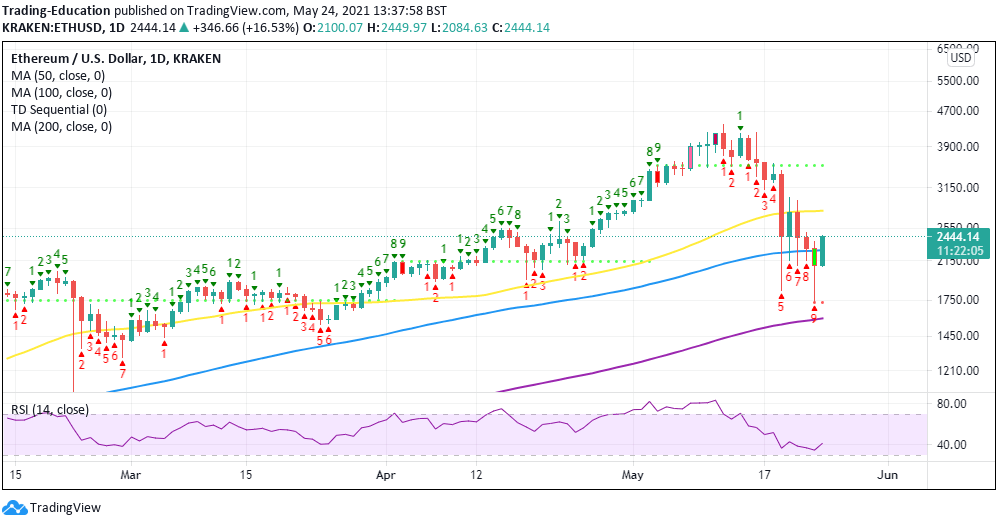 Check Out: Is Ethereum a Good Buy?

Like other crypto assets, Ripple bowed to the massive selling pressure in the market during the weekend trading session. A huge drop from $0.12 stretched the losses to $0.7 before the ongoing recovery commenced.

At the time of writing, XRP is trading at $0.88 as technical levels improved. The MACD reinforces the bullish outlook after sending a buy signal. For example, the indicator scales the midline levels while the MACD line crosses above the signal line. 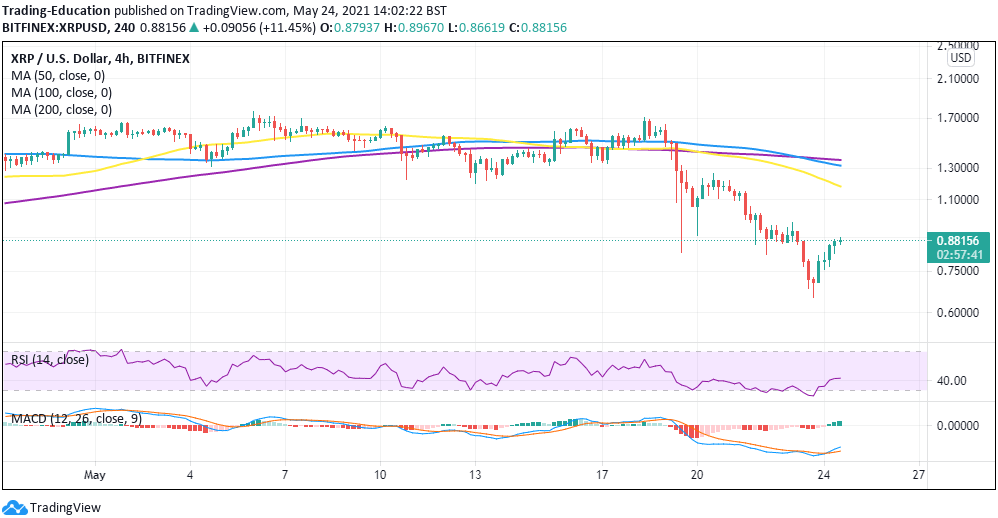 The remaining journey to $1 will take shape if Ripple settles above $0.9 and the RSI closes the gap to the overbought area. Therefore, these are some of the levels to watch ahead of the anticipated lift-off beyond $1. On the flip side, closing the day under $0.9 will delay the recovery or lead to another freefall.

Don't Miss: How Much Will XRP Be Worth In The Next 5 Years?