The crypto market appears to be a mixed bag this Thursday, with bull and bears fighting for control after the most dominantly traded digital assets hit fresh records higher last weekend.

The surge in the US Treasury yields, amid expectations of improved incoming economic data and rising inflation, continues to boost the attractiveness of Bitcoin, as a hedge against inflation.

While Bitcoin, Ethereum and Ripple are looking to regain the upside momentum, Cardano has emerged as the top performer among the top 30 most favourite crypto assets.

The odds of a move higher in Bitcoin are on the rise, as the demand for the pioneer crypto asset is at all-time-highs, thanks to the stockpiling by Chinese tech giants.

Meitu Inc. announced that the firm ramped up its Bitcoin and Ethereum purchases by 386 16,000 respectively, amounting to $50 million.

The news that Morgan Stanley announced to its financial advisors that BTC is an investable asset class, gave a shot in the arm to the crypto bulls on Wednesday.

What the technical setup for these crypto coins suggests?

Bitcoin: Bidding up for the next leg higher, with eyes on $62,000 and beyond

After two straight days of gains, the granddaddy of cryptocurrencies seems to have taken a breather on Thursday. The pause in the recent advance is a sign that a fresh leg higher is in the making, as the bulls could likely be refueling themselves.

The same is reflected through Bitcoin’s four-hour chart. The prices are on a steady decline over the last 12 hours, with the buyers looking for a fresh entry should the critical 50-simple moving average (SMA) at $57,370 hold.

Subsequently, the renewed buying interest could drive the BTC/USD pair to test the symmetrical triangle resistance at $59,187.

A four-hour candlestick closing above that barrier would validate a symmetrical triangle breakout, opening doors for a retest of the $60,000 level.

The record highs at $61,699 could be then on the buyers’ radar, beyond which a test of the pattern target measure above $67,000 would be inevitable.

The Relative Strength Index (RSI) has seen a sudden spike above the central line, suggesting that the bullish bias is gaining traction once again. The RSI currently stands at 60.33. 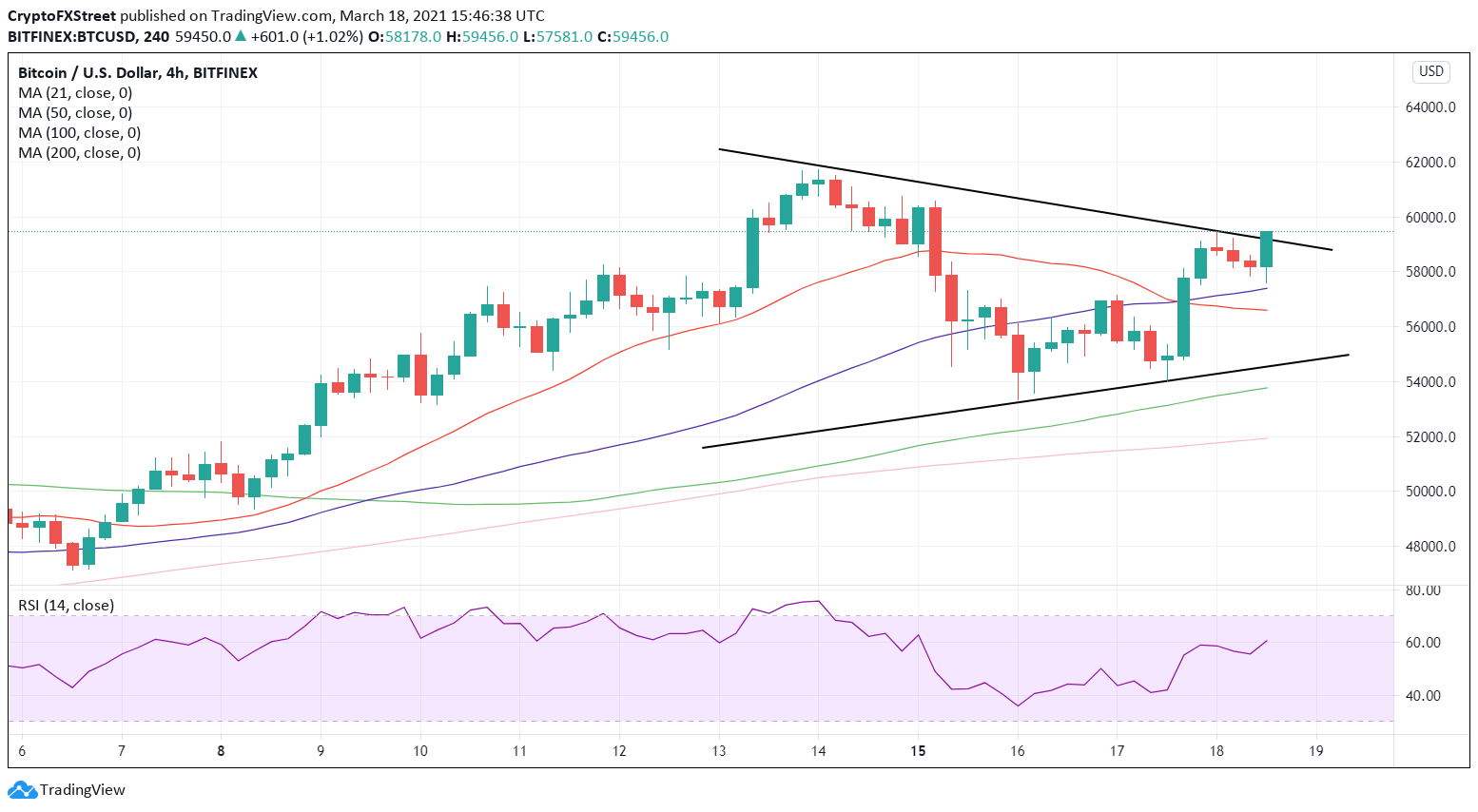 However, if the abovementioned 50-SMA support gives way then the bearish 21-SMA support at $56,523 could come into the picture.

Further south, the rising trendline (triangle) support at 54,600 could offer some temporary reprieve to the bulls, as the correction from all-time-highs picks up pace.

Ethereum extends its sideways trading momentum into the eleventh day in a row. The bulls fail to chew strong offers above $1950 while a dense cluster of healthy support levels limits the downside.

Technically, the range trade in ETH/USD has carved out a rectangle pattern on the daily sticks. The ETH bulls are trying hard to clear the horizontal trendline resistance near $1955 on a daily closing basis, in order to confirm an upside break from the said formation.

A $200 rally could be triggered towards $2150 if the bulls fight back total control. Ahead of that level, the $2000 mark could be a tough nut to crack.

Adding credence to the upbeat momentum, the price trades above all the key major daily averages. 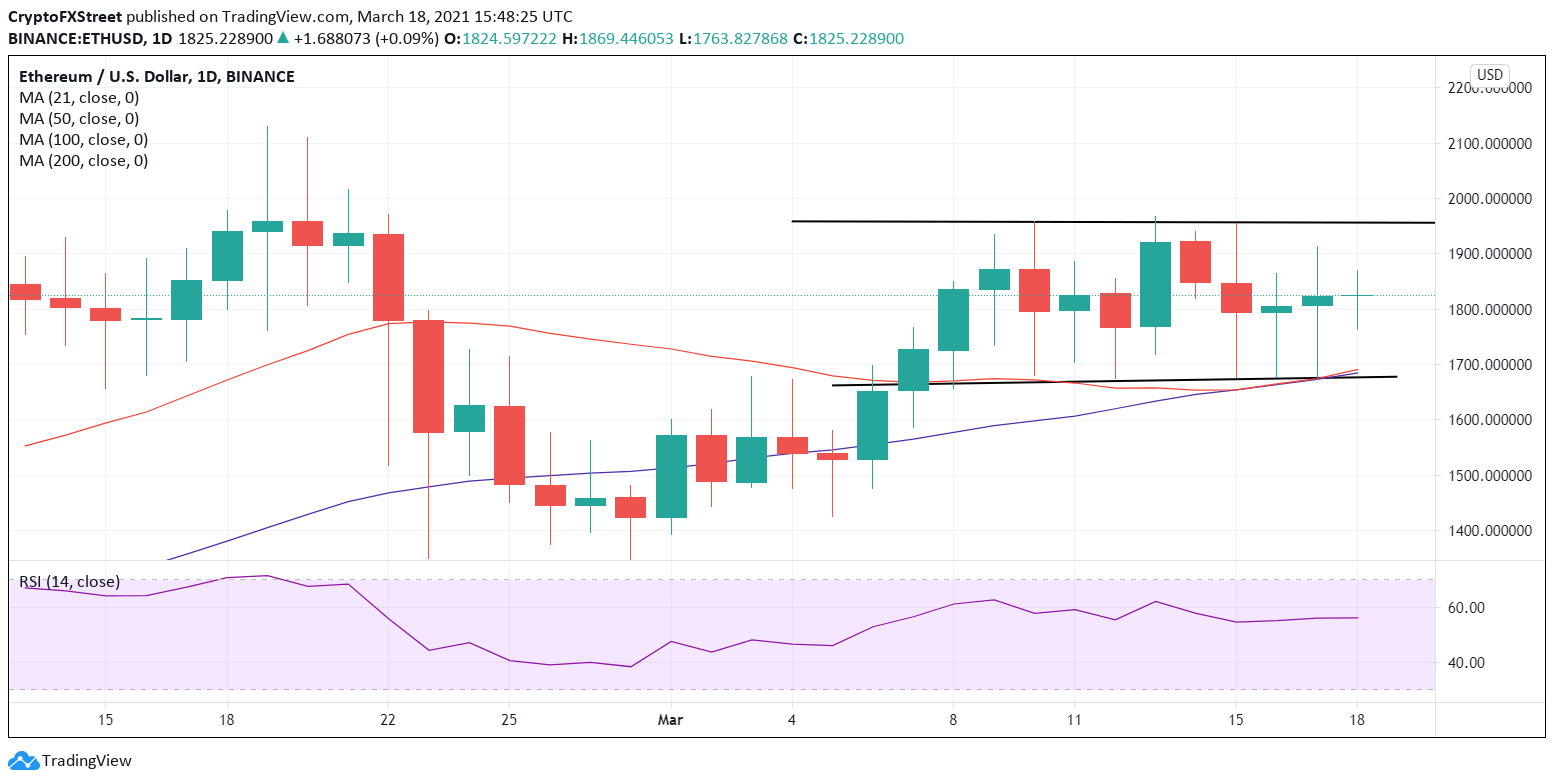 Although the no.2-coin trades in the red this Thursday, the RSI holding up above the midline, remains indicative of the fact that the upside momentum remains unfazed.

Therefore, investors could resort to bargain hunting at lower levels, especially with strong bids seen at $1685. That level is the confluence of the rectangle support, bullish 21 and 50-daily moving averages (DMA).

Acceptance under the latter could yield a bearish break, calling for a sharp sell-off towards the March 7 low at $1585.

The next crucial support awaits at the psychological $1400 mark.

Ripple: Teasing a break above the critical 200-SMA, a fresh upswing imminent

Having managed to close above the 100-DMA cap since March 2, the XRP/USD pair finally looks set to break higher towards the $0.60 level.

However, the $0.50 round figure could offer some resistance to the XRP bulls on their journey northwards.

At the time of writing, the world’s seventh most widely traded digital coin hovers above $0.4750, having breached the horizontal 200-SMA resistance on the four-hour chart at $0.4848.

The pair hit a fresh two-week high at $0.4933 earlier on Thursday before reversing below the 200-SMA. A sustained move that hurdle is critical for Ripple to unleash additional upside.

It’s worth noting that the buyers have to take out on that one key hurdle, in order to resume its uptrend.

The RSI charts a falling trendline breakout, with the leading indicator currently trading at 60.32. This bullish indicator remains in favour of the XRP optimists, supporting the case for a move towards $0.60. 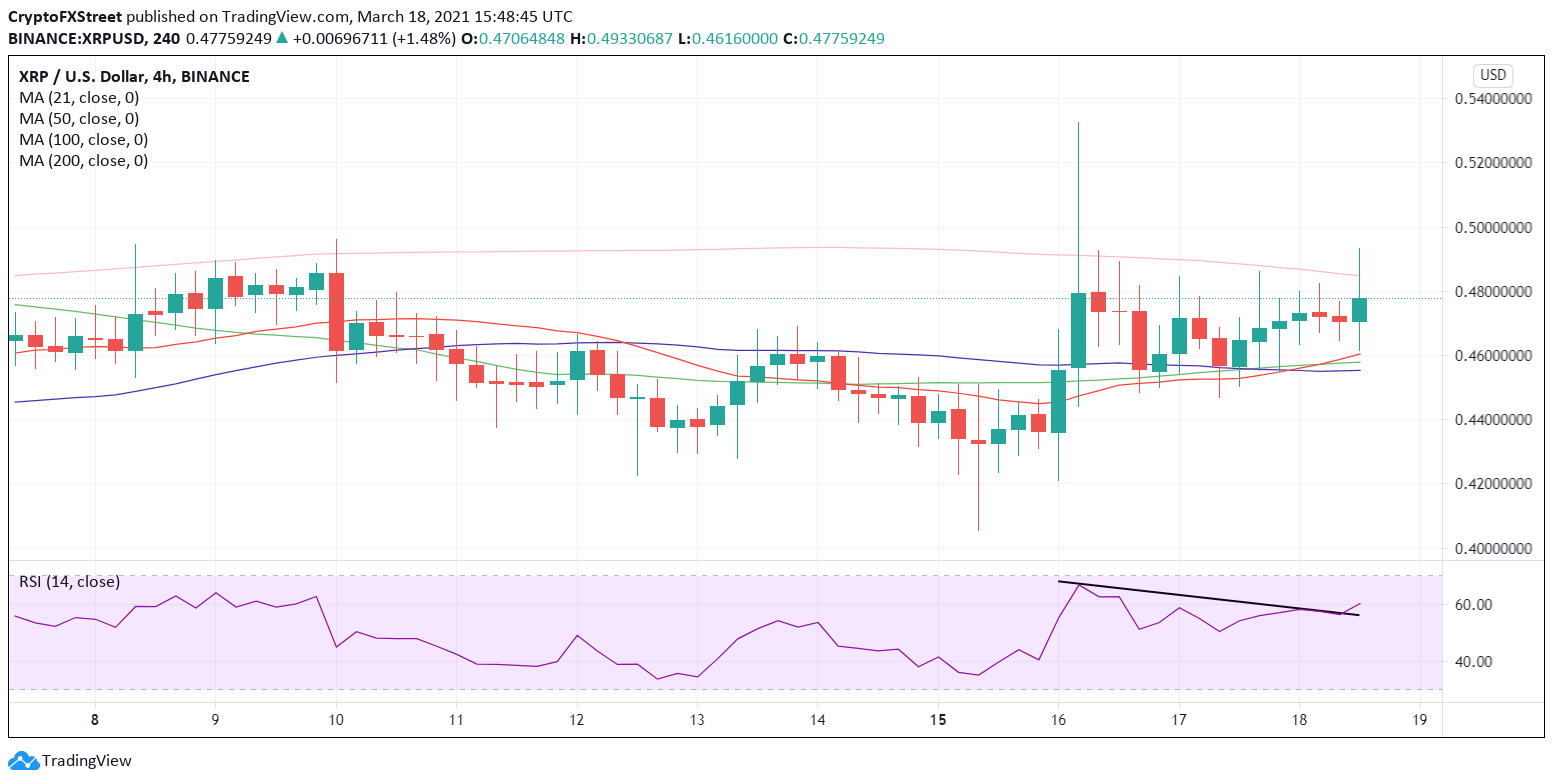 Alternatively, a stack of support levels is placed between $0.46-$0.4550, which could help counter strong selling pressure. That zone is the confluence of the 21, 50 and 100-SMAs.

If the sellers manage to find a foothold below that key area, the March 16 low at $0.4440 could test the bearish commitment.

Overall, the path of least resistance is to the upside for Ripple.

Don't Miss: What Will Ripple Be Worth In 10 Years?