The cryptocurrency market is seeing a broad recovery rally after last Wednesday’s crash extended over the weekend. Investors still lack conviction about the recovery, as the market looks far from stabilizing.

Bitcoin rebounds nearly 9% to $38,000 levels while Ethereum tests $2500, adding 16% on the day. The altcoins are also benefiting from broad market optimism, as MATIC price jumps nearly 40% over the last 12 hours.

Dogecoin and SafeMoon are also recovering ground, as markets await a strong catalyst in a tweet by Tesla Inc.’s founder, Elon Musk, for some stability.

Brainard said: “New forms of private money may introduce counterparty risk into the payments system in new ways that could lead to consumer-protection threats or, at large scale, broader financial-stability risks.”

“The design of any CBDC should complement and not replace currency and bank accounts,” she added.

How are these three trending DeFi tokens positioned on the technical graphs?

Dogecoin: Bulls looks to extend control and challenge a wall of resistance

Dogecoin is snapping a three-day losing spree, as the bulls are attempting a solid recovery after bottoming out near $0.2450.

In doing so, DOGE price almost reversed Sunday’s slide, although failed to sustain above the $0.3600 round figure, as bears refuse to give up.

On the four-hourly chart, the meme-based coin continues to trend within the two-week-old falling wedge formation, despite last week’s brutal crash.

On Sunday, the price tested the falling wedge support at $0.2535 and staged an impressive turnaround for near that level.

The recovery extended into Monday, as the bulls yearn for acceptance above the bearish 21-simple moving average (SMA) at $0.3385.

A four-hourly closing above the key hurdle is needed to extend the recovery towards the $0.4050-$0.4090 region, where the falling wedge resistance, 50-SMA and 200-SMA coincide.

If the price dives out of the pattern, a bullish breakout would be confirmed, with the immediate resistance awaiting at the downward-sloping 100-SMA at $0.4600.

However, the Relative Strength Index (RSI) has stalled its recovery mode and turned flat near 45.00, implying weakening upside momentum.

Therefore, if the sellers return convincingly, the wedge support, now at $0.2463 could be back in play.

Wednesday’s flash crash low at $0.1950 should the downside momentum accelerate.

SafeMoon: 100-SMA could cap the rebound from key support amid bearish technicals

Over the past 12 hours, SafeMoon has embarked upon a recovery rally, as the sharp correction from all-time highs seems to have stalled for now.

The sellers take a breather after the relentless slide, however, the nightmare seems far from over, as the technical setup for SAFEMOON continues to paint a bearish picture.

The coin witnessed aggressive selling following a sustained breach of the bullish 100-SMA support, then at $0.000004362 on the 12-hour chart.

That demand area came to the rescue of the bulls, as they staged an impressive bounce back towards the abovementioned 100-SMA target.

The price must recapture the 100-SMA on a sustained basis, in order to build the recovery towards the $0.0000050 psychological mark. 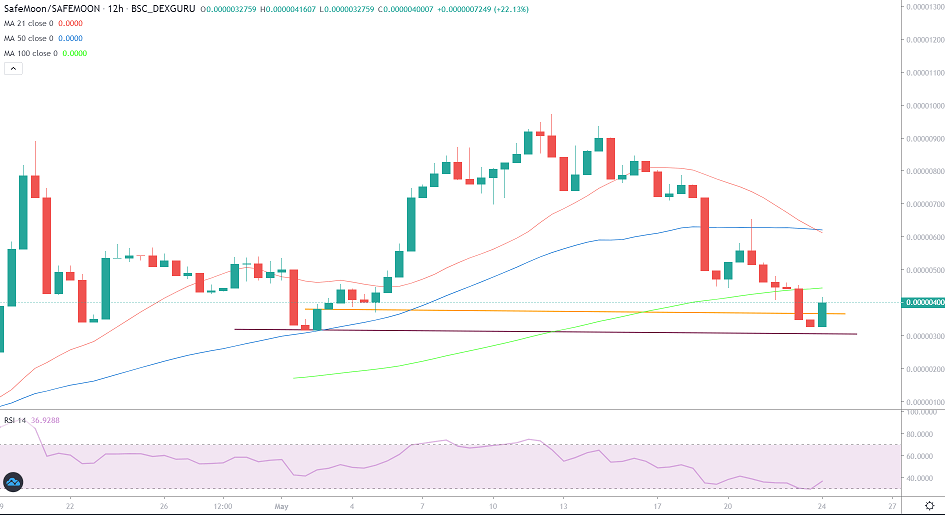 On the flip side, the bounce seems to be a dead cat one, as the Relative Strength Index (RSI) continues to remain below the midline, despite the sharp reversal from lower levels.

Further, a bear cross spotted on the said timeframe, with the 21-SMA having cut the 50-SMA from above, adds credence to the expectations of a shallow rebound.

Therefore, a retest of the aforesaid horizontal trendline supports could very well remain on the cards in the near term.

Check Out: 15 Reasons You Should Invest in Safemoon Today

MATIC: Recovery to gain traction on a daily closing above this critical Fibo resistance

MATIC is back in the green for the first time in four days, looking to reverse the weekend’s sell-off.

The crypto rout extended well into the weekend, as MATIC price took out Wednesday’s low of $1.0113 to reach fresh two-week lows at $0.7432.

The selling pressure intensified after the price fell below the psychological $1 threshold, as the 50-daily moving average (DMA) at $0.7832 also briefly caved in.

The MATIC bulls managed to close the day above the latter while having recaptured $0.9112 as well. At that point the 23.6% Fibonacci Retracement level of the meteoritic rise from April 23 to May 19 aligns.

A daily closing above the last could negate the bearish momentum (for now), exposing the critical resistance at $1.9062, the 61.8% Fibo level of the same upsurge.

The 14-day RSI appears supportive of the additional upside, as it has pierced through the midline to reclaim the bullish territory.

If the selling mode resurfaces, the 50-DMA support could be the line in the sand for the optimists.