Amid conflicting news hitting the crypto market this Thursday, a sense of caution prevails, as the granddaddy of cryptocurrencies, Bitcoin, struggles to resist above the $40,000 barrier. Meanwhile, Ethereum remains trapped in an extremely narrow range of around $2300.

Markets are digesting a mixed set of news, a surge in buying interest witnessed in BTC from institutional investors, amid a drop in Grayscale Bitcoin Trust shares (GBTC) discount, keeping the bullish interest afloat.

On the other hand, investors fret the reports that the US Senate’s bipartisan infrastructure bill would be funded by imposing stricter rules on digital asset businesses. An additional $28 billion in taxes would be raised from cryptocurrency transactions.

Amongst the DeFi tokens, the sentiment appears less encouraging, although Dogecoin tends to find support from the news that Burger King has announced that it will be accepting Dogecoin, the Shiba-Inu face-themed cryptocurrency, for its dog treats in Brazil.

Its close rival, Shiba Inu, seems to be little impressed, as its performance continues to remain mainly chart driven.

How are these top three trending DeFi tokens positioned on the charts?

Dogecoin: Bulls are gathering strength for the next upswing

Dogecoin price is posting minor losses around $0.20 this Thursday, lacking a clear directional bias for the third straight trading session after spiking to three-week highs of $0.2426 on Monday.

The meme-based coin’s performance has been quite sluggish so far this week, despite a strong start to the week. It could be probably due to the reduced impact of Elon Musk’s tweets/ comments on Dogecoin.

Against that backdrop, DOGE price has been wavering in a familiar range between $0.19-$0.22 levels, awaiting a strong catalyst for the next move higher.

The bullish potential remains intact for Dogecoin price, as depicted by its 12-hour chart.

The canine-inspired coin has been riding along with the downward-sloping 50-Simple Moving Average (SMA), now at $0.2010, ever since it pulled back from a multi-week peak earlier on.

DOGE bulls remain hopeful for another upswing towards the three-week tops so long as they defend the 50-SMA.

The force remains behind the bulls, as the Relative Strength Index (RSI) inches slightly higher while holding well above the midline.

Further, the 21-SMA is fast approaching the 50-SMA from beneath, with an upside breakout likely to confirm a bull cross, which could add credence to the potential leg higher.

A rally towards the $0.30 round number could be in the offing should the DOGE buyers take out strong resistance around $0.24, the confluence of Monday’s high and descending 100-SMA.

The next relevant support is envisioned at the horizontal (orange) trendline support at $0.1841.

Read More: Is Dogecoin a Good Investment Opportunity in August 2021?

SafeMoon: Focus on Thursday’s close to validate a bear flag

SafeMoon price is set to end its ten-day-long bearish consolidative mode, as it refreshes multi-month lows near $0.00000195.

Sellers have returned with pomp and show heading towards the weekend, as SafeMoon price snaps the two-day uptrend on Thursday.

In doing so, the altcoin is testing the bullish commitments at a critical juncture while the technical indicators scream sell, leaving the price vulnerable to deeper declines.

As observed on the daily chart, the consolidation that followed SAFEMOON’s downtrend from the June 29 high of $0.00000352 has taken the shape of a bear flag formation.

A bear flag is a bearish continuation pattern, with a daily closing below the rising trendline support at $0.00000236 to validate the formation, opening floors towards the pattern target measured at $0.0000012.

Ahead of that, the $0.0000015 round number could protect the downside. The 14-day RSI has turned south below the 50.00 level, allowing room for more declines. 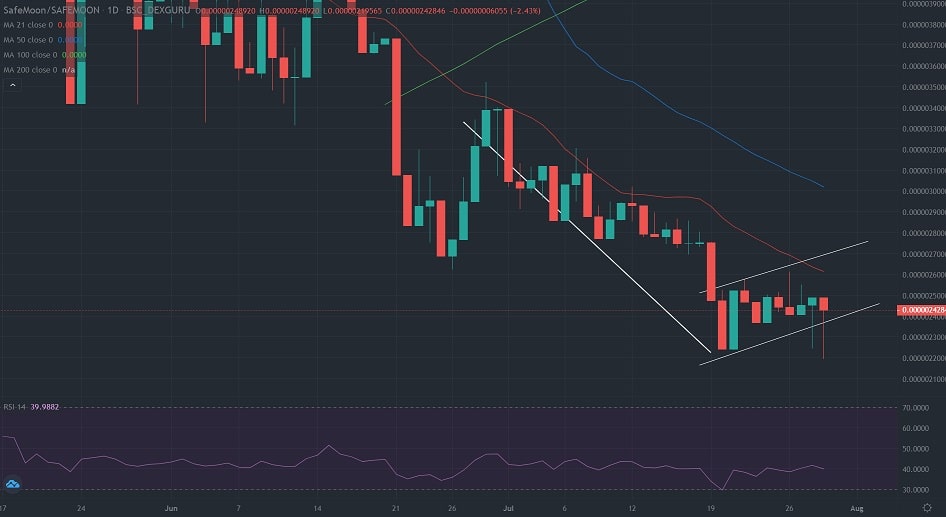 If SafeMoon bulls manage to find a strong foothold above the said daily support line, then a rebound towards the bearish 21-Daily Moving Average (DMA) at $0.00000261 could be witnessed. That level intersects with the July 26 high.

Meanwhile, daily closing above the rising trendline resistance at $0.00000268 will invalidate the bearish pattern, reviving the hopes for a bullish reversal.

Don't Miss: Is It Worth Investing in Safemoon?

SHIB price is trading in the red zone for the second consecutive day, as the bulls seemingly lack conviction amid a cautious mood seen across the crypto board.

Shiba Inu ranges in a familiar trading band since the July 26 sudden spike, as the bulls have failed to find acceptance above the $0.0000060 figure.

Looking at the 12-hour technical graph, SHIB price remains confined in a tight range, with the upside attempts limited by the horizontal 21-SMA at $0.00000634.

Meanwhile, SHIB bulls continue to find bids at the falling wedge resistance-turned-support at $0.00000559. Note that SHIB price spotted a falling wedge breakout on the said time frame on Monday.

The RSI points south below the midline, currently at 41.42, suggesting that the odds of a downside breakout from the current range remain higher.

Therefore, a 12-hourly candlestick closing below the abovementioned cushion could trigger a sharp sell-off towards $0.00000456, which coincides with the lower boundary of the wedge formation.

On the flip side, SHIB bulls need a decisive break above the 21-SMA to negate the bearish bias in the near term.

To conclude, the downside bias in SHIB price appears likely so long as the coin holds below the 21-SMA barrier.

Check Out: Should You Buy Shiba Inu Coin?