Sellers are back in control on Monday, destabilizing the crypto market once again, as Bitcoin nears the critical $30,000 support while Ethereum attacks $1800. The sentiment around cryptocurrencies appears dour amid downbeat fundamentals while technical indicators also flag concerns for the most favourite digital assets.

Meanwhile, China’s crackdown measures on Bitcoin mining and Chinese-owned app TikTok banning Influencers from promoting cryptocurrencies like bitcoin, dogecoin, on its platform, dealt a blow to the pioneer cryptocurrency and other altcoins.

With the discouraging catalysts, investors looked past the recent action on Twitter from Tesla Inc.’s founder and billionaire Elon Musk, which did prompt a 10% jump in DOGE over the weekend. Musk did not tweet anything but changed his profile picture on Twitter to a headshot with DOGE reflecting in his sunglasses.

On July 17, Musk tweeted out, “Lil X is hodling his Doge like a champ. Literally never said the word “sell” even once!”

Shiba Inu, the so-called ‘Dogecoin-killer’, tracks the moves in Dogecoin, relenting to the bearish pressures, as chart-driven action leads the way. Meanwhile, SafeMoon is poised for a big break to the downside amid growing concerns of SAFEMOON being a Ponzi scheme, in response to its fee structure.

Dave Portnoy, the founder of Barstool Sports, said of SafeMoon: “It could be a Ponzi Scheme… If it is a Ponzi scheme, get in on the ground floor.”

Dogecoin: Path of least resistance appears to the downside

The DOGE bears remain in control for the second straight day on Monday, having kicked off the week on the wrong footing,

The meme-based coin is reversing a temporary reversal seen last Friday, backed by Musk’s tweet, as sellers look to yield a downside breakout from the recent range play between $0.20 and $0.17.

Technically, nothing seems to have changed for Dogecoin traders, as the downtrend from the June 25 high of $0.2914 is set to regain traction following a sustained break below the $0.17 demand area.

It’s worth noting that DOGE’s daily technical setup remains in favour of the bears ever since the price confirmed a symmetrical triangle breakdown early last week.

However, the bears now await a strong impetus to extend the downside firmly below the mildly bullish 200-Daily Moving Average (DMA), which emerges as a powerful support and now stands at $0.1818.

On acceptance below the latter, the sellers will then target the June 22 low at $0.1527. Further south, the horizontal orange (dashed) trendline support at $0.1357 could be challenged. At that level, the April 23 low coincides.

The 14-day Relative Strength Index (RSI) has taken a U-turn, now pointing south once again towards the oversold region, suggesting that there is additional scope for the downside.

On the flip side, if the 200-DMA support holds up, then the bulls could test the falling trendline resistance at $0.1967 on the road to recovery.

Don't Miss: What Will Dogecoin Be Worth in 10 Years?

Shiba Inu is attacking three-week lows of $0.00000612, shedding over 6% on a daily basis, as the selling pressure remains unabated for the second straight session.

The sell-off comes on the heels of a downbeat mood witnessed across the crypto market, as sellers resume the recent downtrend. SHIB price has eroded almost 33% of its value after peaking out on June 6 at $0.000006909.

The SHIB bulls appear to have lost all hopes, as the descending trendline support (connecting the June 6 and 16 lows) of $0.000005937 remains at risk.

A daily closing below that level will bring the June 22 low of $0.000006326 (the horizontal dashed trendline support) back into play.

Adding credence to a potential move lower, a bear cross is in the offing, as the 21-Daily Moving Average (DMA) is on the verge of cutting the 50-DMA from above.

“A bearish crossover shows that sellers or short-sellers are gaining control and a drop or continued weakness is likely in a stock's price,” per Investopedia.

Acceptance above the latter could unleash the additional upside towards $0.0000080, the intersection of 21 and 50-DMAs. The triangle support-turned-resistance aligns at that level.

However, the technical indicators continue to scream sell, which helps keep the bearish momentum intact.

A month-long period of bearish consolidation could come to an end sooner, as SafeMoon price reaches tipping amid slowing volumes and the range play getting tighter each passing day.

Investors’ wariness over the future of this altcoin amidst its free structure, puts it at a vulnerable spot.

Looking at the daily chart, SafeMoon bears are gearing up for a massive sell-off on a decisive break below this key horizontal trendline support at $0.00000247. SAFEMOON’s price has been holding above this level since April 19.

The Relative Strength Index (RSI) is sharply pointing southward, looking to test the oversold boundary, which indicates that a downside breakout remains imminent.

However, a daily closing below the abovementioned support line is critical for the SafeMoon sellers. 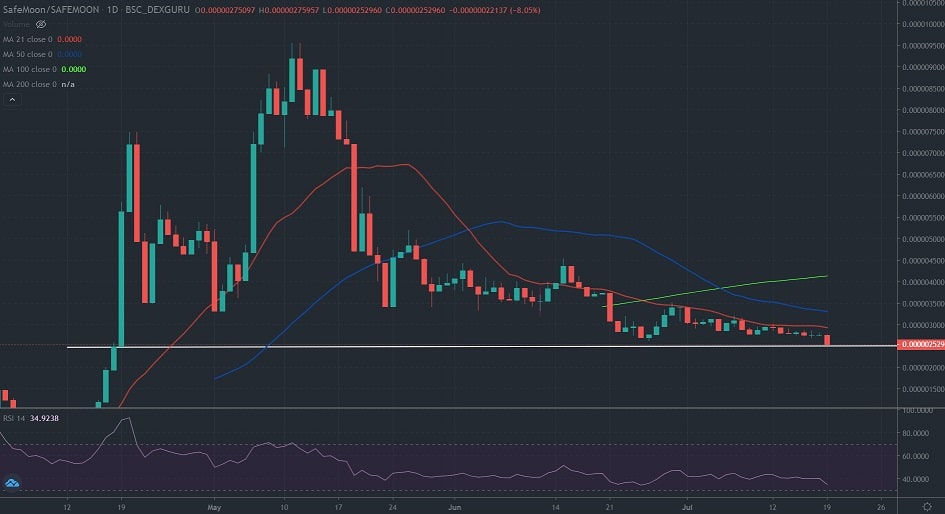 To the upside, the SafeMoon bulls need to crack this significant hurdle at $0.000002918, the 21-DMA, below which the price has been trending since June 18.

Should the buyers manage to find a strong foothold above that upside barrier, a run-up towards the downward-sloping 50-DMA at $0.00000331 remains on the cards,

To conclude, SafeMoon bears remain in the driver’s seat, with more risks tilted to the downside.

Check Out: Is It Worth Investing in Safemoon?