The sentiment across the crypto board remains mixed amid choppy trading, as the flagship cryptocurrency, Bitcoin struggles to find a strong foothold above $35,000. Ethereum rallies 5% to the $2100 mark, as it is primed for a big technical breakout just days before London hard fork.

The crypto space is surfing higher on Bitcoin’s recovery wave from the $30,000 level, although some of the widely watched DeFi coins, such as Dogecoin, SafeMoon etc appear to lack the upside conviction.

Dogecoin looks vulnerable, backed by a bearish technical setup as well as the fundamental factors. The IntoTheBlock’s Global In/Out of the Money (GIOM) model shows that if the DOGE price closes below $0.242, then about 124,000 addresses that purchased 8.61 billion DOGE at an average price of $0.261 will be “Out of the Money”, which could reinforce the selling interest at full steam.

However, seen as a bucking the downbeat momentum is the Dogecoin spin-off, Shiba Inu, which keeps cheering the latest tweet by Elon Musk, founder of Tesla Inc. Musk tweeted out Saturday, "My Shiba Inu will be named Floki”, after which the SHIB price rocketed nearly 16% to the reach the highest in six weeks.

How are these three trending DeFi tokens positioned graphically?

SAFEMOON is reaching a critical juncture this Monday, as the weekend love is likely to fade into a new week.

SafeMoon price is envisioned to stall its three-day recovery from over two-month lows and resume its recent downtrend. The technical setup remains in favor of bears, despite the ongoing recovery mode.

Subsequently, the DeFi token saw a gradual decline throughout the week and reached the lowest levels since April 19 at $0.000002623 on Friday before kicking off the recovery rally over the weekend.

However, the price is closing in on a key supply zone around $0.000003334-$0.000003450 region on its road to recovery. That area is the confluence of the triangle support-turned-resistance and downward-sloping 21-Daily Moving Average (DMA).

On a rejection at that level, the sellers will fight back control and knock off SAFEMOON towards the multi-month troughs.

The 4-day Relative Strength Index (RSI) is pointing north but remains well below the midline, suggesting that the recovery momentum could likely lack additional legs. The RSI currently stands at 42.59. 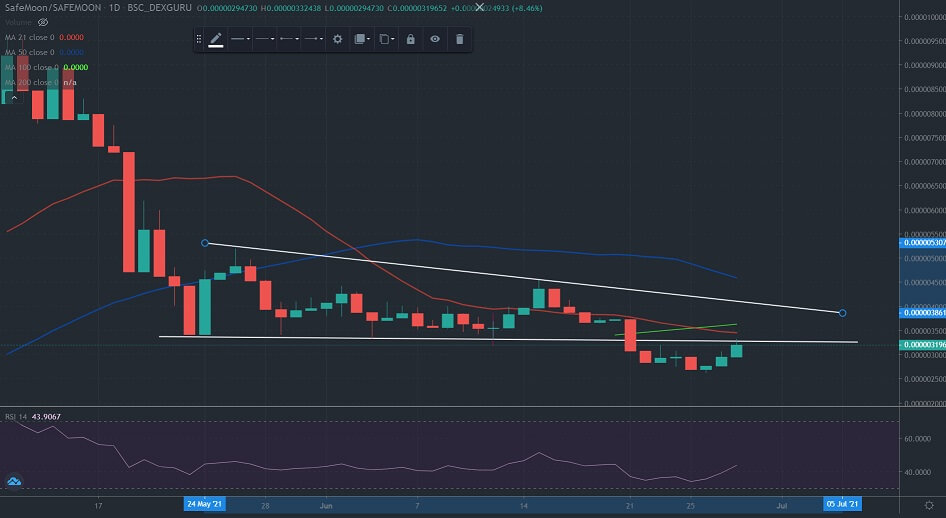 However, daily closing above the aforesaid critical hurdle is needed to stage a meaningful recovery.

Overall, SAFEMOON’s path of least resistance appears to the downside amid a bunch of healthy resistance stacked up.

Read Also: Is It Worth Investing in Safemoon?

Dogecoin: The tide is turning in favour of the bearish traders

After Dogecoin’s impressive rebound from the 200-Daily Moving Average (DMA), then at $0.1510, the 21-DMA resistance spoilt the party and confined the price in a narrow range over the last week.

This Monday, the selling interest in the canine-themed coin seems to have returned following the upbeat momentum seen over the weekend.

This could be mainly attributed to the bear cross spotted on the daily sticks, as the 21-DMA closed below the 100-DMA, signaling a bearish reversal in the near term.

Adding credence to a potential move lower, the RSI has stalled its uptrend, once again turning south towards the oversold territory whilst below 50.00.

Therefore, a test of the abovementioned support near $0.22 cannot be ruled, below which the May 19 flash crash low of $0.1950 will back on the sellers’ radars.

Alternatively, if the bulls see a sustained move above the 21 and 100-DMA intersection near $0.2850, the weekend’s advance could resume towards the $0.40 threshold.

All in all, bears remain poised to retest the 200-DMA amid a brief corrective pullback.

Shib price is consolidating its three-day winning streak, sitting at the highest levels in two weeks at $0.000008324

It’s worth mentioning that the price is extending its recovery after having found strong support at the 100-DMA a week ago.

The rally in the meme-based coin found extra fuel after the bulls reclaimed ground above the mildly bearish 21-DMA at $0.000007334.

SHIB price remains on track to conquer the $0.000010 barrier, as the RSI points north above the central line, keeping the bulls hopeful. The momentum indicator is now trading at 51.43.

Ahead of that round figure, the falling channel upper boundary at $0.000009448 will come into play.

A firm break above the latter will validate a channel breakout, with a test of the $0.000010 level inevitable for SHIB optimists.

However, if the SHIB price fails to find acceptance above the falling channel resistance, sellers will look to challenge the 21-DMA support yet again.

A daily closing below the last could accelerate the selling momentum, which could put the upward-sloping 100-DMA, now at $0.000005957, at risk.

To conclude, Shib price is likely to ditch the dour mood in the crypto market, as Elon Musk-led optimism continues to cheer the so-called “Dogecoin Killer”.

Check Out: Why Shiba Inu Will Skyrocket