Bears seem to have clawed back lost ground on Monday, especially after the pioneer digital asset, Bitcoin, failed once again below the $35,000 level while Ethereum receded below $2100.

Crypto markets witness a summer calm before the bearish storm kicks in once amid a slew of underlying discouraging fundamental factors. Chinese crackdown measures continue to haunt amid Tesla Inc.’s CEO Elon Musk’s warnings about high transaction costs for the world top 2 most favourite crypto coins - Bitcoin and Ethereum.

Further, Barclays prohibiting its customers from transferring from bank cards to the Binance cryptocurrency exchange also weighed on the overall market sentiment.

The dismal mood spilled over onto the DeFi tokens as well, as the widely watched altcoins, including Dogecoin, Shiba Inu and SafeMoon feel the pull of gravity following a temporary reversal.

An absence of endorsements from billionaire Musk justifies the sluggish performance in these coins. Let’s take a look at how are these trending tokens positioned on the technical graph.

Dogecoin: The path of least resistance remains to the downside

Nothing seems to have changed fundamentally as well as on the technical front, as Dogecoin remains on a downward path since the June 25 high of $0.2914.

The bearish momentum has returned on Monday after DOGE price kicked off the week on the right footing. However, DOGE bears keep the price within Friday’s range of $0.2384-$0.1946.

From a near-term technical perspective, the meme-coin extends its lower highs formation, moving parallelly below the 21-Daily Moving Average (DMA) resistance, now at $0.2355. since early June.

Such a price action has kept the downside potential intact as the sellers await a strong catalyst for fresh entries, especially after last week’s sluggish price action.

The immediate support at the rising trendline support of $0.2026 could help limit the decline should the selling pressure intensify in the coming hours.

On a failure to resist above the latter, the ascending 200-DMA, now at $0.1736 could emerge as a powerful support.

The 14-day Relative Strength Index (RSI), a leading indicator, continues to point southwards while wallowing in the bearish zone, indicating that the downside momentum remains well in place despite the tepid recovery attempts.

Adding credence to the move lower, a bear cross got spotted on the said time frame on July 7 after the 50-DMA pierced through the 100-DMA from above.

Only a daily closing above the 21-DMA could revive the bullish interest by negating the bearish bias in the near term.

Read More: Why Dogecoin Will Skyrocket

Shiba Inu looks south towards $0.0000070 as sellers fight back control

Sellers appear to catch a breather before resuming the next downside, especially after the canine-inspired coin gave back the gains fuelled by the launch of Shibaswap, a decentralized exchange last Tuesday. The SHIB price clinched weekly tops at $0.000009775 in a quick reaction to the launch.

Looking at the daily chart, the Shib price has found acceptance below the short-term critical support at the 21-Daily Moving Average (DMA), now seen at $0.000008079.

The horizontal 50-DMA also coincides at that level, making it a tough nut to crack for the SHIB bulls.

if the SHIB bulls manage to close the daily candlestick above the latter then a rebound towards the falling trendline resistance at $0.00000950 remains inevitable.

However, Thursday’s high of $0.000008820 could test the bullish commitments on its way to the triangle resistance.

It’s worth recalling that Shiba Inu price has kept its range within a symmetrical triangle formation since early June.

On the flip side, with the 14-day Relative Strength Index (RSI) heading towards the oversold region while sitting below the 50.00 level, the odds of a downside breakout of the triangle remain higher.

Therefore, a firm break below the rising trendline (triangle) support at $0.00000754 is needed to validate the technical breakdown, which would expose the immediate cap located at the upward-sloping 100-DMA at $0.00000714.

Check Out: Is Shiba Inu Coin A Good Investment And Should I Invest In SHIB?

SAFEMOON: Buyers attempt a comeback but price not out of the woods yet

SafeMoon price is extending its recovery from two-week lows of $0.000002769 into a fresh week this Monday, as the bears test the bullish commitments after booking two weekly declines in a row.

Chart-based price action continues to lead the way for SafeMoon traders amid yet another down day for the crypto market. As of writing, the meme-based coin is seeing potential dead cat bounce around $0.000002969, adding about 1% on the day.

SAFEMOON’s technical setup on the daily chart continues to paint a dour outlook, despite the ongoing relief rally.

Friday’s confirmation of a symmetrical triangle breakdown remains in play so long as the bears maintain their grip below the triangle resistance at $0.00000304.

The Relative Strength Index (RSI) is edging higher but still holds below the central link, keeping the bearish undertone intact for SAFEMOON. 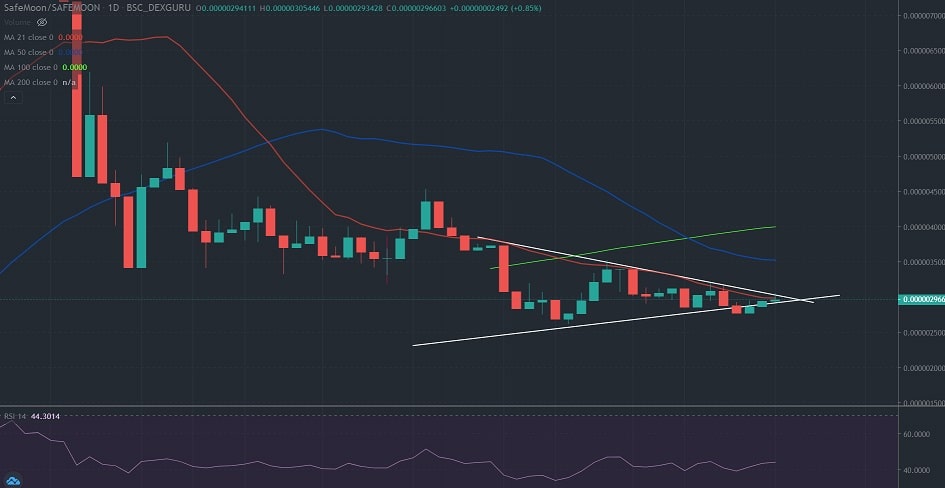 Alternatively, if the buyers find acceptance above the aforesaid triangle resistance, then a fresh upswing could be triggered the flattish 50-Daily Moving Average (DMA) at $0.000003253.

A daily closing above $0.0000030 would invalidate the bearish breakdown, calling for a bullish reversal in the near term.

Don't Miss: Is It Worth Investing in Safemoon?