Between May 7 and May 17 the Tron price has crashed from $0.15 to $0.113. During this downward surge, TRX managed to flip the 20-day and 50-day SMAs from support to resistance. Plus, the parabolic SAR was reversed from bullish to bearish. Let’s take a closer look with technical analysis.

Tron Price Has Critical Support At $0.11

Tron price has been crashing towards the $0.11 support line, before the buyers took control and bounced TRX up to $0.117.  The RSI shows that TRX could drop some more before it gets oversold. The overall sentiment in this timeframe is negative.

In the four-hour Tron price chart, TRX has bounced up from the $0.11 support and has found resistance at the 20-bar SMA. The MACD has turned green to show that overall market sentiment in this timeframe is positive.This tells us that buyers are attempting a comeback in the short term.

Popular pseudonymous analyst known as Kaleo recently said that XRP is poised for a bull run. They also anticipated breakouts in two more altcoins. The analyst took to Twitter to share their views. 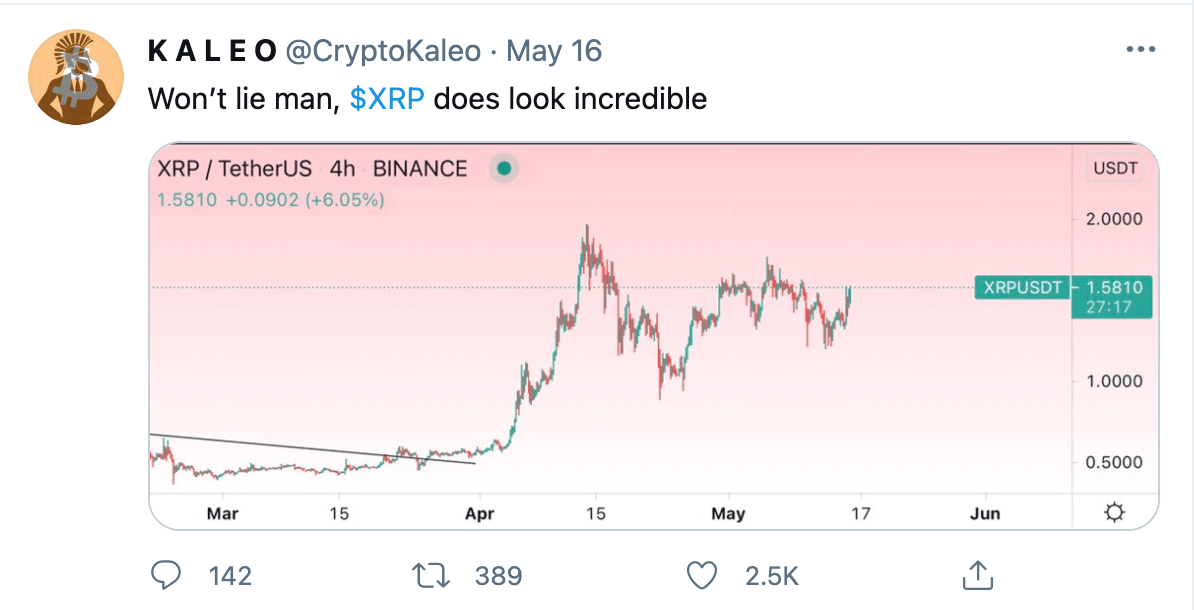 Kaleo said that it is time for crypto traders to start looking for opportunities in TRON (TRX) again. According to them, the digital content platform is ready to start grinding it’s way higher. 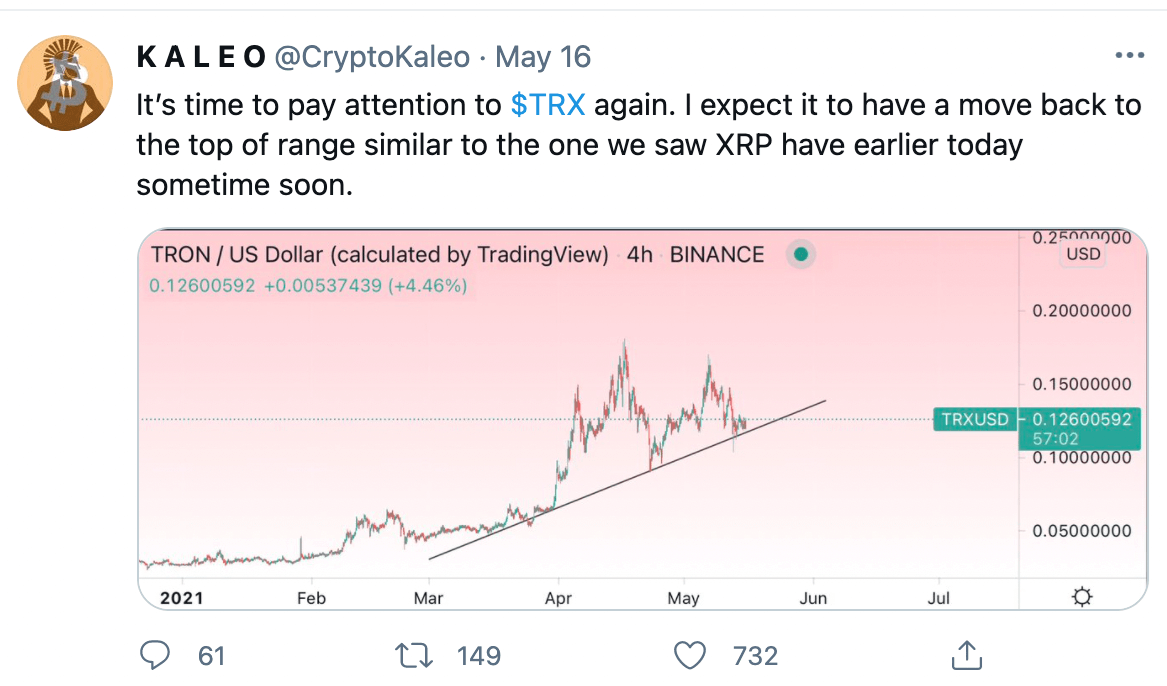 It’s time to pay attention to TRX again. I expect it to have a move back to the top of range similar to the one we saw XRP have earlier today sometime soon.

Kaleo noted that TRON also appears strong in its Bitcoin pair (TRX/BTC) as TRX gears up for an enormous spike upward. 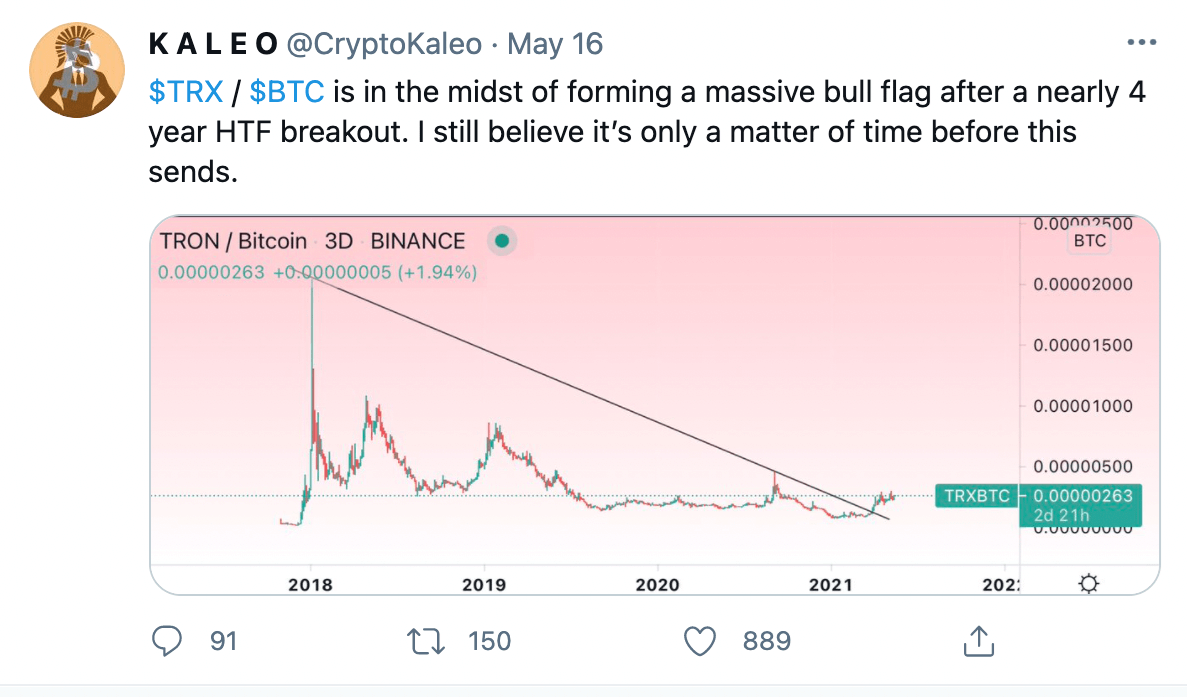 TRX/BTC is in the midst of forming a massive bull flag after a nearly 4 year HTF (high timeframe) breakout. I still believe it’s only a matter of time before this sends.

The trader added that Terra (LUNA) is looking ready to burst out of an accumulation zone around $15.00 to new all-time highs as soon as Bitcoin’s correction is over.

LUNA/USD is still accumulating at the lower end of the range, following step closer to BTC’s price. As soon as BTC finds its bottom, I expect this to retest the upper trend before breaking out.

Kaleo added that LUNA/BTC should consolidate in the coming weeks more before making a long-awaited move up to all-time highs as well. 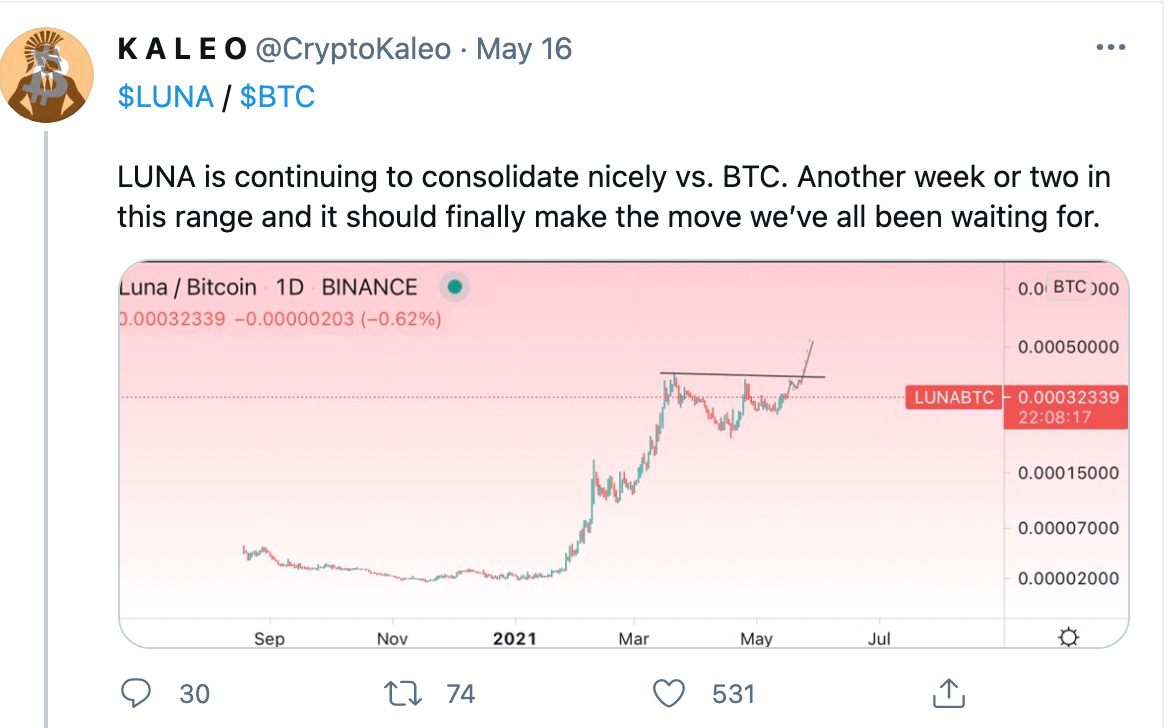 LUNA is continuing to consolidate nicely vs. BTC. Another week or two in this range and it should finally make the move we’ve all been waiting for.

As things stand, the $0.11 support is particularly important for Tron price. Any break below this line will break TRX below the $0.10 psychological level.