The Tron price tumbled from $0.0817 to $0.068 between June 4 and June 12, after encountering resistance at the 20-day SMA. Following this drop, TRX has been trending horizontally between the 20-day and 200-day SMAs. However, after repeated failure at the 20-day SMA, TRX has dropped down.

Over the last three days, the Tron price has crashed from $0.073 to $0.064, dropping below the 200-day SMA. At the same time, the Bollinger Band has started expanding to accommodate for this increased volatility. The relative strength index (RSI) shows that TRX could drop some more before it gets oversold.

@TronixTrx shared their analysis on Twitter with a chart from Coinmetrics to demonstrate how Tron leads the rest in transactions per second. 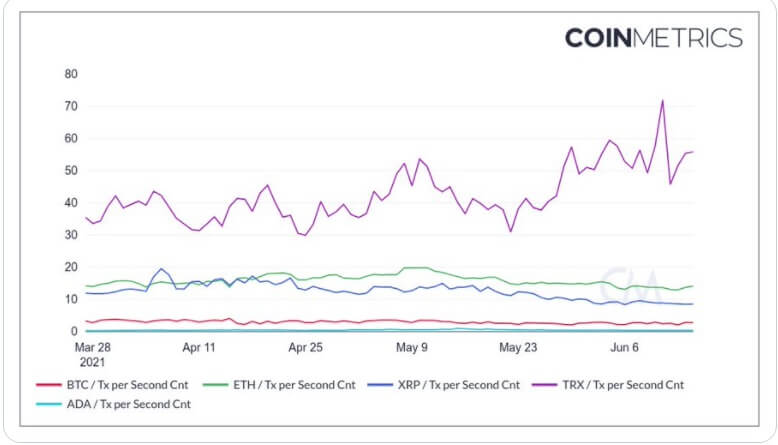 A peek at the same data from Coinmetrics reveals that Tron overtook XRP in January, in terms of transactions per second.

In terms of network growth, unique addresses on the Tron network have just exceeded 40 million. The project’s founder and CEO, Justin Sun, shared this new milestone and thanked the Tron community for its support over the years.

Tron is currently staring at a death cross that could occur in the first few weeks of July. The possibility of such an event occurring has been highlighted in the following daily TRX/USDT chart. 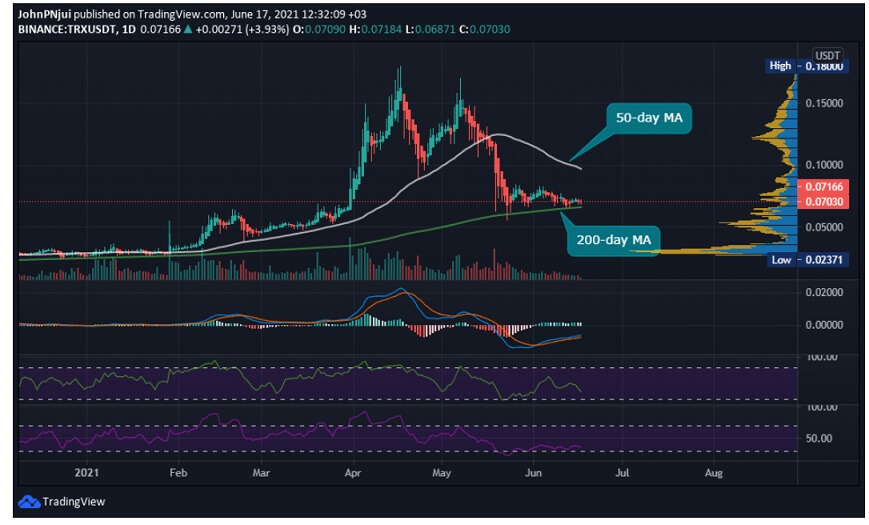 Tron’s trade volume has been reducing since the massive crypto-wide selloff of last month, as per the chart. Furthermore, the daily MACD indicates additional weakness by Tron (TRX) that could lead to the ultimate loss of the 200-day moving average as support. The daily MFI and RSI also confirm the stated weakness.

So despite the impressive on-chain metrics on the Tron blockchain, the digital asset of TRX could be headed for a tough few weeks in the crypto markets.

As things stand, the Tron price will probably drop to the $0.06 psychological level.