Since May 20, The Tron price has been sluggishly trudging along in a narrow $0.026 channel between $0.089 and $0.063. While the daily price chart has flashed multiple buy signals, the 4-hour chart tells us that the volatility is decreasing.

Between May 30 and May 3, the Tron price had four bullish sessions out of five, during which it rose from $0.0685 to $0.0828. During this jump, TRX met resistance at the 20-dat SMA and dropped down to $0.076. However, despite this drop, TRX has flashed two buy signals – the MACD shows increasing bullish momentum, and the parabolic SAR has flipped from negative to positive.

Looking at the 4-hour Tron price chart, we can see that TRX has flipped the 20-bar SMA from support to resistance and is currently hovering above the 50-bar SMA. The Bollinger Band has started narrowing to show decreasing price volatility.

Justin Sun, the CEO of TRON, has remained bullish on Bitcoin, despite Elon Musk’s bearish tweets. Sun has been consistent with his bullish feedback on the state of the market.

The CEO has also been quick to make bullish requests and pledges supporting Tron’s native token (TRX). However, Sun seems to be more focused on BTC currently. While the majority of the crypto community expressed their frustration following Musk’s recent tweets, Sun stepped up to preserve the market from the possible liquidation of $1.5 billion worth of Bitcoin. This is the estimated amount of Bitcoin within Tesla’s possession.

The CEO of Tesla posted a meme that many interpreted as a humorous way of Musk declaring his exit from the bitcoin market. 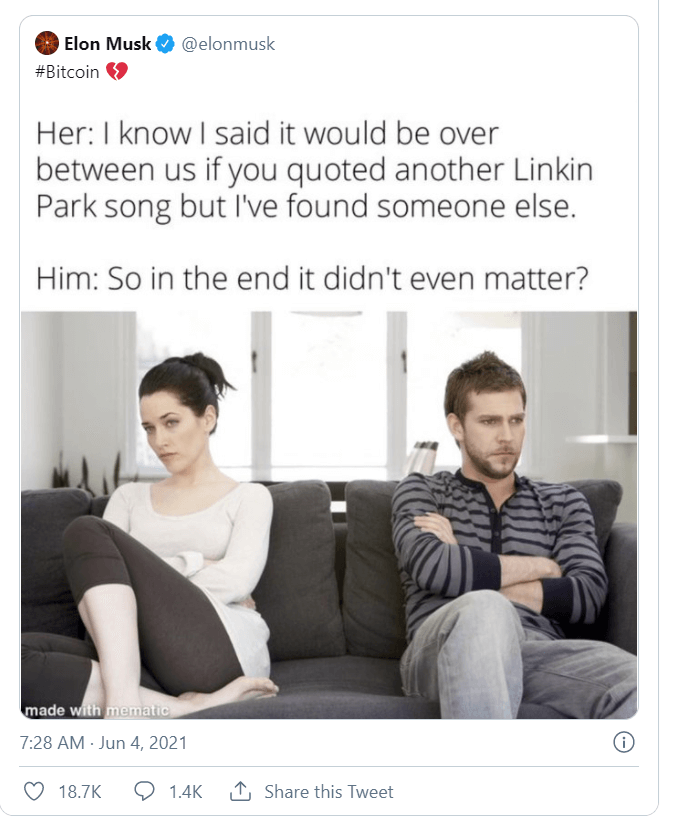 Responding to the tweet posted by Musk that sent Bitcoin to a new daily low, Sun wrote:

I will buy all the Bitcoin that Elon Musk sells.

Although Musk did not make any official tweet directly saying that Tesla had sold its Bitcoin holdings, he had previously hinted that there was a good possibility that could be the case in the third quarter.

Many of the billionaire’s tweets following the official statement he made over two weeks ago, declaring that Tesla had suspended BTC payment, have been repeatedly bearish.

Sun’s pledge points to the fact that he, like many others, blames Musk for the market’s decline. He revealed this to CNBC a while back, but also added that he believes Musk’s Bitcoin energy concerns were valid.

I definitely believe Elon Musk’s concerns about crypto is legit. So, definitely I think the crypto industry needs to find a way out, especially the energy consumption and also how to turn Bitcoin into an energy friendly crypto ; basically a green crypto.

Sun added that the same has been his goal for Tron, claiming that the energy consumption level of the Tron blockchain has significantly reduced by 99% but has managed to maintain the same efficiency.