The Tron price had started the previous week in the red, but with the 20-day SMA acting as support, the price pushed up on Tuesday, rising by 7.60% and settling at $0.107. However, after reaching this level, the price began to drop, falling by 1.69% on Wednesday and then by a further 1.78% on Thursday to settle at $0.103. TRX continued to drop on Friday as sellers continued to dominate the market, and the price fell by a further 0.71%. The price started the weekend in the same vein as the price continued to drop on Saturday, settling at $0.102. 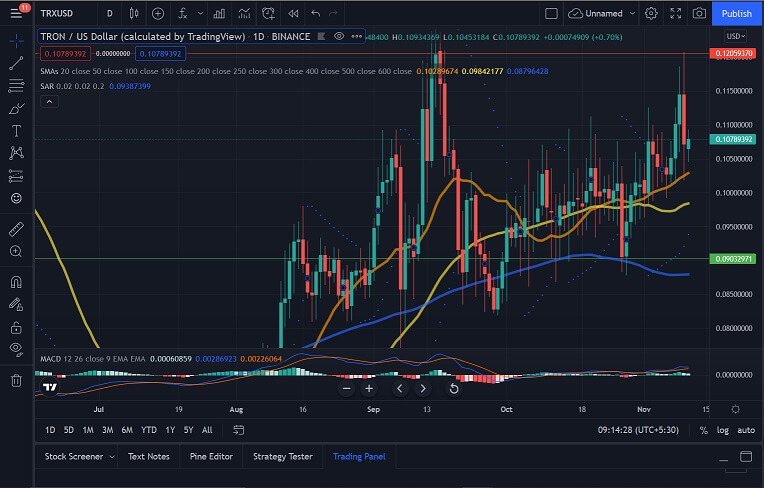 Despite a bearish start to the weekend, the Tron price recovered on Sunday, as it rose to $0.105, an increase of 2.26%. The current week saw the bullish sentiment persist, as TRX rose by almost 5% on Monday, rising to $0.110, before another increase of 3.96% on Tuesday pushed the price up to $0.114. However, TRX encountered strong resistance at this level and dropped by 6.41% on Wednesday, as it fell back to $0.107. The current session sees buyers back in control, and with the Parabolic SAR and MACD still bullish, we could see the price push up further. 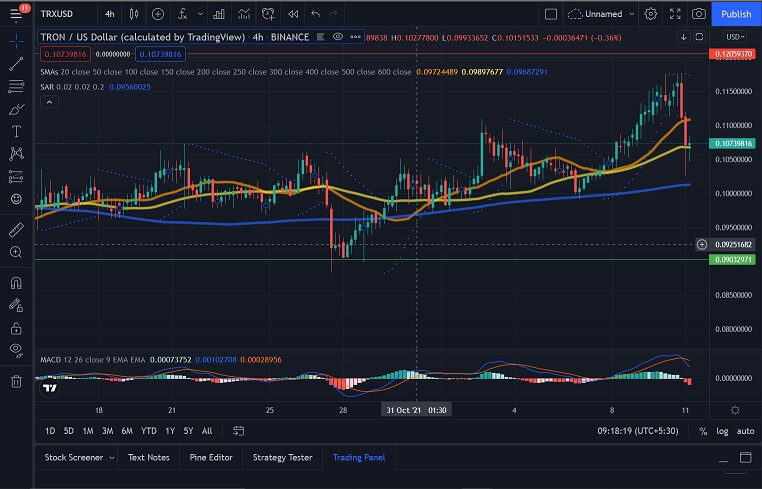 The 4-hour Tron price chart shows us that TRX had pushed up to $0.108 on the 2nd before turning bearish and dropping to $0.103, where the 20-bar SMA acted as support. The price continued to drop from this level, slipping below the 20-bar SMA, dropping to $0.102, before recovering and rising to $0.105. However, with the 20-bar SMA now acting as resistance, the price dropped to $0.100, slipping below the 50-bar SMA. TRX rose from this level, pushing past the 20-bar and 50-bar SMAs, surging to $0.116 before dropping to its current level of $0.107. While the Parabolic SAR and MACD have both flipped to bearish, we can see that the 50-bar SMA is acting as support, and the current session has seen the price push higher. If the price continues to increase, then we could see them flip to bullish.

The Tron price chart shows that TRX has recovered during the current session after a significant fall on Wednesday. If the price continues to increase, we could see TRX settle at $0.110.

TRX
Tron Price
Top Brokers in
All Regulated Brokers
67% of retail clients lose money when trading CFDs with this provider.