The Tron price recovered on Tuesday after a sharp fall on Monday after it fell by over 6% to settle at $0.104. TRX started the current session in the green and has shot up to $0.115, with the price set to push even higher by current indicators. Market watchers would be hoping this week is relatively better for TRX than the previous one, which saw the price fall significantly, pushing TRX below the $0.100 level and the 20-day SMA after it had gotten off to a bearish start to last week as well.

The Tron price started last week in the red, with the price falling marginally on the 6th. However, Tuesday (7th) saw the price fall drastically, falling by over 17% to slip below the $0.100 level and the 20-day SMA. TRX settled at $0.085 on Tuesday but rebounded almost immediately on Wednesday, rising by 8% to go back above the 20-day SMA to settle at $0.092. After a reasonably static session on Thursday, TRX dropped down to $0.090 on Friday, slipping below the 20-day SMA once more. 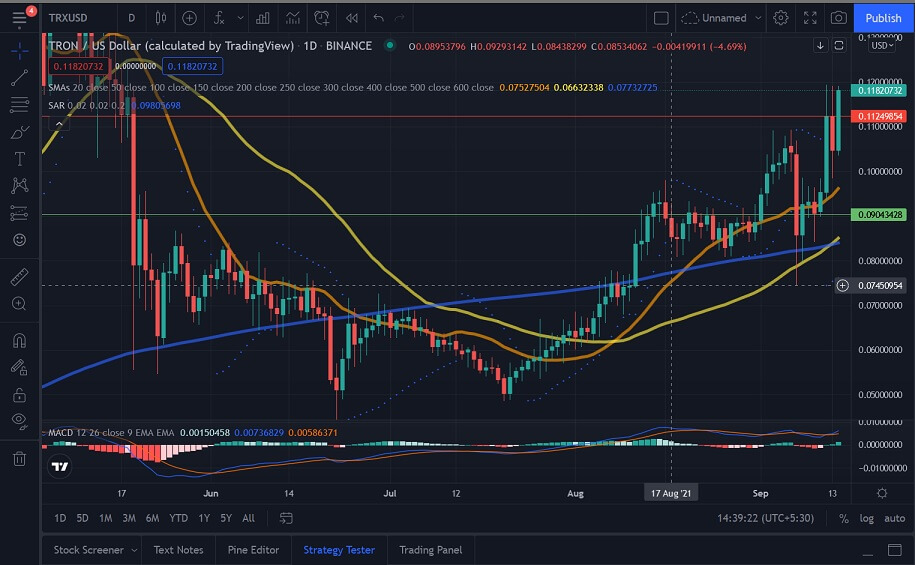 The Tron price recovered over the weekend, pushing up by 5.18% to go above the 20-day SMA and settle at $0.095 on Saturday. Sunday saw a significant rise in the price of TRX, when it rose by over 17%, going past $0.100 and settling at $0.112. However, Monday saw TRX back in the red; after its price was pushed back to $0.014, the price recovered on Tuesday,  having gone up to $0.116, rising by over 11%, and we could see the price go even higher. Looking at the MACD and the Parabolic SAR, we can see that both are currently bullish, indicating that we could see TRX push up further during the current session. 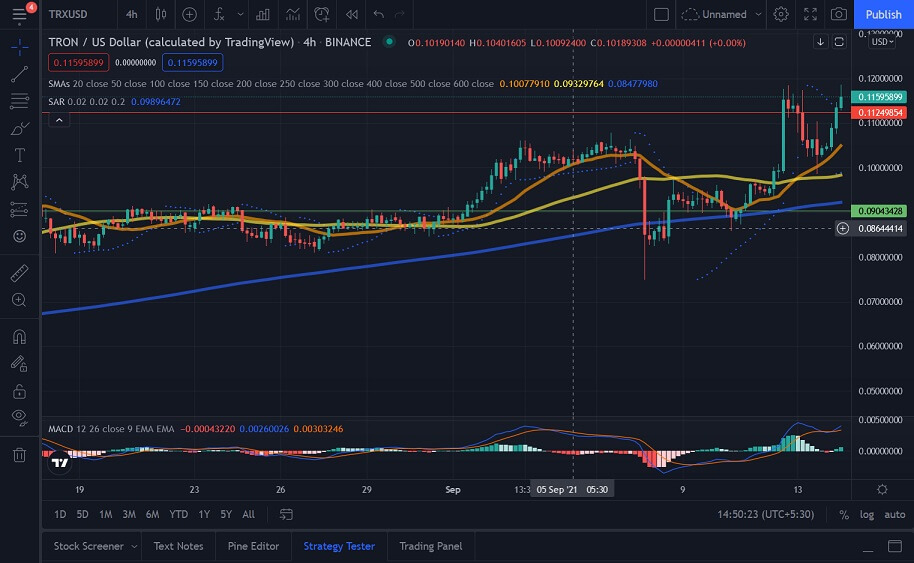 Looking at the 4-hour Tron price chart, we can see that TRX is extremely bullish in today’s session. TRX had pushed up above the 200-bar SMA and the 20-bar SMA on the 11th of September. However, with the 50-bar SMA acting as resistance, TRX could not push beyond $0.092 on the 11th. However, it broke through the 50-bar SMA on the 12th, pushing up to $0.099 and then rising by over 15% to settle at $0.115. After reaching this level, we saw TRX drop down to $0.102 before recovering during the current session. Currently, we can see that TRX is around $0.116, and with buyers in control. Both the Parabolic SAR and the MACD are bullish, indicating that the price may rise during the current session.

Looking at the Tron price chart, we can see that TRX has started on a very positive note, with the price already up by almost 10%. If TRX can maintain this momentum, then we could see the price push towards $0.120 during the current session.