The Tron price jumped up from $0.055 to $0.136 between March 26 and April 5. However, this is when TRX met massive resistance and crashed to the $0.11 support wall over the next two days. Let’s take a closer look with technical analysis.

Following this recent Tron price crash, TRX managed to recover to $0.12. Despite decreasing significantly, the overall market momentum remains on the bullish side. Prior to the dip in TRX, the price had reached an intraday high of $0.15.

The drop and resurgence can be further observed when looking at the 4-hour Tron price chart. You can see that TRX dropped from $0.146 to the 50-bar SMA ($0.105). From that point, TRON rose up and met resistance at the 20-day SMA. However, due to this surge, the parabolic SAR has been flipped from positive to negative.

TrueUSD To Launch On Tron Blockchain

TrueUSD (TUSD) stablecoin recently announced that TUSD would be powered by Tron's TRC20 standard and run on the TRON blockchain shortly. 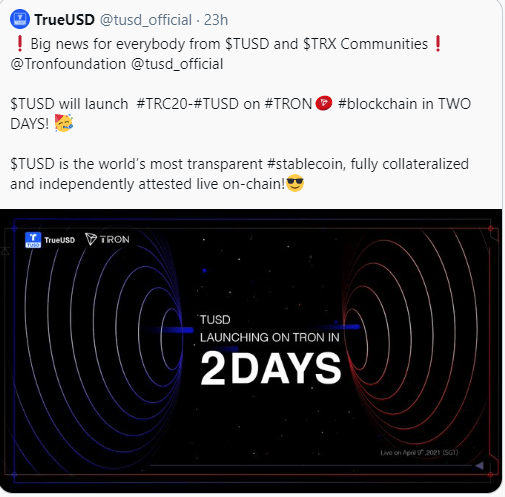 Big news for everybody from $TUSD and $TRX Communities

$TUSD will launch  #TRC20-#TUSD on #TRON #blockchain in TWO DAYS!

TrueUSD (TUSD) will be the second dollar-backed stablecoin to run on TRC20. In March 2019, USDT stablecoin migrated on the Tron network, adding another blockchain to its collection after Ethereum, EOS, Omni, Tron, etc.

However, TUSD is lesser-known than Tether or USDC. Unlike the other coins, TrueUSD is ranked 154th on CoinMarketCap.

The relative strength index (RSI) in the 4-hour Tron price chart shows that there is still some growth potential, so a move back to $0.15 is definitely in the cards.