The Tron price went through a significant fall on Tuesday, falling by almost 18%. The fall sees TRX wipe out all the gains it had made since the start of the Month, during an exceptionally bullish week that saw TRX push past the $0.100 mark. TRX could not get past the $0.090 level during the last week of August, and sellers eventually pushed the price down to below the 20-day SMA by the end of August.

After slipping below the 20-day SMA, the Tron price pushed back up, starting September on a positive note, with the price nearly going above $0.100 on 1st September. TRX pushed past $0.100 on 3rd September and further on to end the weekend at $0.105. Monday saw TRX open in the red, with the price falling marginally, thanks to resistance at $0.105. However, Tuesday was when the price really fell, with TRX losing almost 18% in one day, falling below the $0.100 mark and the 20-day SMA that was acting as support. 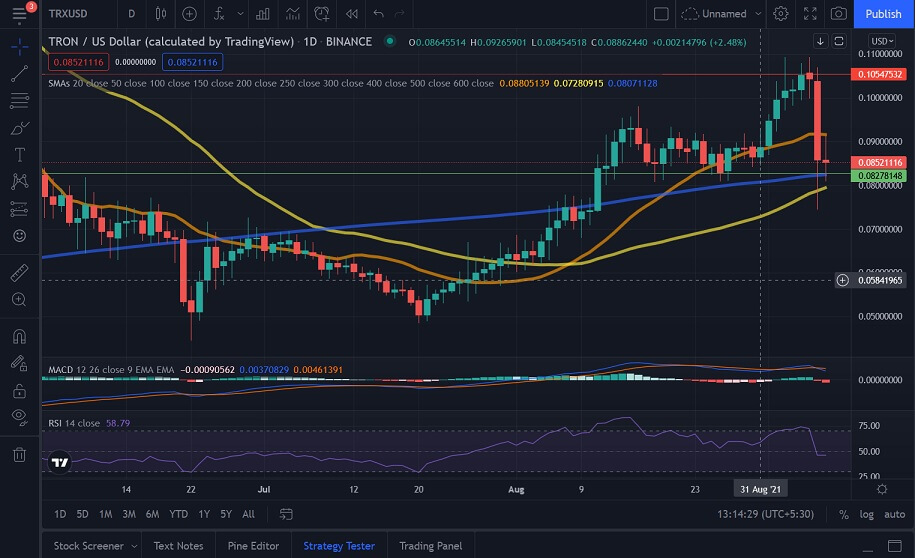 Looking at the 1-day Tron price chart, we can see that TRX could find support at the $0.085 level or further down where the 200-day SMA is present ($0.082). If the price can find support at either of these levels, we may see the price stabilize, although a recovery at this stage seems unlikely. The MACD flipped from bullish to bearish thanks to the price drop resulting from TRX going above the neutral zone on Sunday. With the RSI back in the neutral zone, we could see the price stabilize during the current session, although it is likely that the price would fall to $0.082 first. 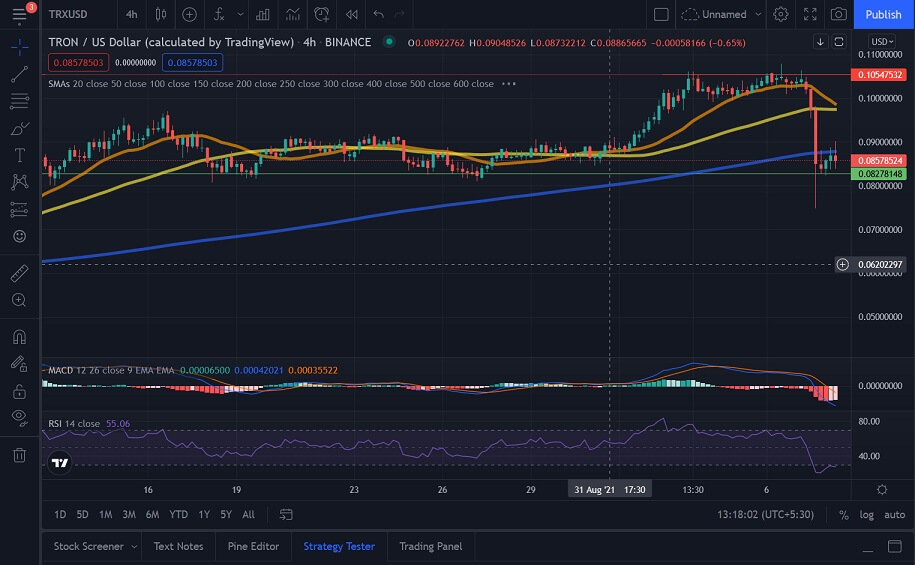 Looking at the 4-hour Tron price chart, we can see that the 20-bar SMA was acting as support and pushed the price up to $0.104. However, after this point, we saw TRX slip below the 20-bar SMA, and in subsequent sessions, we saw it go below the 50-bar and the 200-bar SMA. TRX fell by over 18% in three sessions and fell to $0,084 before stabilizing. The MACD is fairly bearish, indicating the negative sentiment in the market. The RSI has slipped under the neutral zone, which indicates that we may see TRX push back up from the support level at $0.082 as the asset is currently undervalued.

With the current negative sentiment, it can be expected that the Tron price could fall further during the current session. Having already fallen by almost 18% on Tuesday, the current session also sees TRX in the red. We could see TRX fall to the 200-bar SMA at around $0.082, which could act as support and help stabilize the price.