Uniswap recently hit a stubborn barrier at $60, leading to a correction that tested support at $25. The weekend session was dominated by sideways price action as bulls focused on recovery. In the meantime, the price is teetering at $26 amid a bullish building momentum.

Uniswap resumes the uptrend ahead a major liftoff past $40

The immediate upside has been capped under the 50 Simple Moving Average (SMA) as revealed by the four-hour chart. However, the Moving Average Convergence Divergence (MACD) bullish signal has allowed investors to focus on the uptrend. For example, the trend momentum indicator has shrunk the gap to the mean line (0.00), adding credence to the bullish outlook.

Eventually, they build enough volume to break through the x-axis, paving the way for a 44% upswing. The breakout target is measured from the pattern’s highest to lowest points. 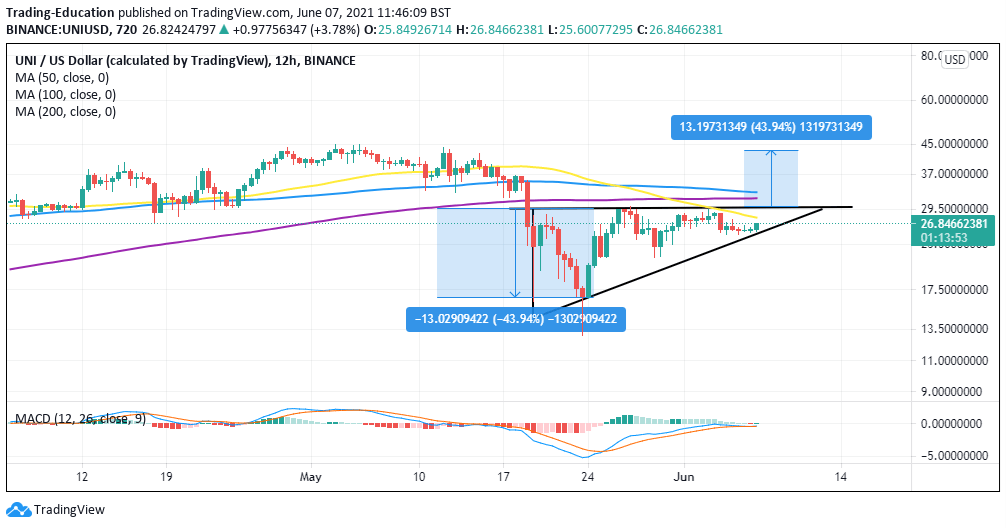 A buy signal has been presented based on the market value realized value (MVRV) on-chain model by Santiment. This metric tracks the profit or loss ratio of holders of UNI tokens moved over the last 30 days and analyzed against the price at which each of the tokens previously moved.

The MVRV has recovered from the previous dip to -52% to the prevailing -6%. This increase reflects the uptrend from May lows around $14. Besides, it shows that Uniswap is still in a buy zone, thus attracting many investors. A move above the zero line would bolster the decentralized finance token much higher.

Santiment, a leading behavioural analytics platform, shows that the number of addresses joining UNI’s protocol has sustained a dire downtrend. Note that this metric shows if the token is losing or gaining traction in terms of adoption.

Declining network growth is a formidable bearish signal as it shows the level of interaction is going down. For instance, an average of 1,080 addresses joined the Uniswap blockchain on June 6, down from a 30-day high of 2,957. Without an upturn in this metric, UNI May continue to drop appreciably.