Uniswap, a decentralized platform, and token in the cryptocurrency market, has finally broken out of a ranging channel. The uplift comes after three weeks of thwarted bullish effort to crack the resistance at $40. Following the technical breakout, UNI is ready for seemingly imminent gains past $50.

As illustrated on the four-hour chart, the ranging channel curtailed the bulls’ effort. Attempts to lift above $40 bore no fruits. Uniswap fell in tandem with other crypto assets last week, which tested support at $27.5.

Meanwhile, the drop price allowed new investors to enter the market while the rest are likely to have increased their stakes. The least resistance path seems upward as validated by various technical indicators such as the Moving Average Convergence Divergence (MACD) and the Relative Strength Index (RSI) on the four-hour chart. 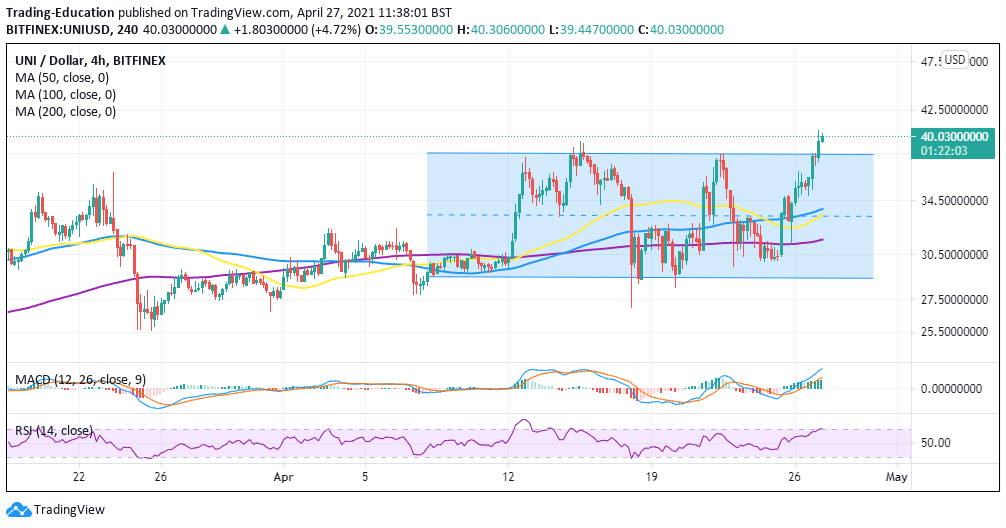 The MACD follows an asset’s trend and measures its momentum. For now, the indicator is back to the positive region. In addition, the MACD line expands the gap above the signal line. If the technical picture remains unchanged, Uniswap will close the gap heading to $50.

The RSI also assumes that the uptrend is intact and the situation may remain the same in the coming sessions. This trend strength indicator enters the overbought region, suggesting that the uptrend will hold longer.

IntoTheBlock’s “Daily New Addresses” on-chain model reveals an improving network growth based on a 30-day moving average. Recently, the number of unique addresses had dropped to roughly 2,400 but stand nearly at 3,000 on April 27. If the uptick continues, it implies that Uniswap is gaining traction both as network adoption and in the token’s value over time.

Note that holding above $40 will help secure the upswing. Moreover, if support at $38 or the ranging channel steadies, buyers will have the opportunity to focus on higher levels toward $50.

It is worth mentioning that the upswing will fail to come into play if the support at $38 caves. Returning into the ranging channel may trigger massive losses eyeing support at the 50 Simple Moving Average (SMA) and the buyer congestion between $27.5 and $30.5.