Uniswap has focused on recovery since the beginning of the week. The paralyzing losses in the previous week were unstoppable until $12.95. Once the uptrend resumed, UNI scaled the levels with the hope of making it to $40 within the shortest time possible.

However, resistance at $30, as highlighted by the 100 Simple Moving Average, continues to hamper the liftoff. In the meantime, a correction has seen Uniswap retest short-term support at $25.

Uniswap jammed in another tug of war; where to next?

Uniswap is dancing between two crucial levels; the 100 SMA resistance, as mentioned, and the SMA support. Note that the decentralized finance (Defi) token has a market value of $27.5. Lifting above the immediate hurdle could trigger immense buy orders as investors look toward $40.

However, the longer UNI stays below $30 and the 100 SMA, the stronger the bearish grip becomes. On the downside, the immediate support at $25, and by extension, the 50 SMA ensures that selling advances are controlled. If push comes to shove and the down leg stretches, Uniswap could freefall to $21 and perhaps retest levels toward $12.5. 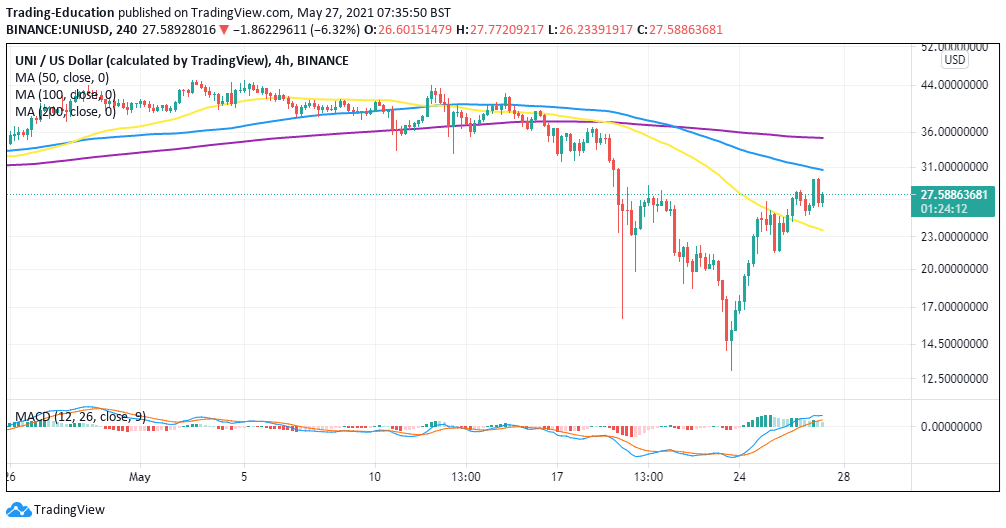 IntoTheBlock’s In/Out of the Money Around Price (IOMAP) on-chain model divulges the most substantial resistance between $27.5 and $28. Here, roughly 7,100 addresses previously bought around 244 million UNI.

The seller congestion in this area is strong enough to absorb the buying pressure developing toward $30. Hence, the impending upswing to $40 may have to wait for bulls to recollect and stage another mission.

Uniswap sits on top of fragile support areas on the downside, implying that the slightest resistance path is downward. Unless the technical support at the 50 SMA holds, UNI could spiral, losing most of the gains accrued throughout the week.

Note that the IOMAP points at the zone running from $27.8 and $26.6 as the most significant support. Here, roughly 3,400 addresses previously scooped up approximately 7.3 million UNI.

The Moving Average Convergence Divergence (MACD) has recently crossed into the positive region. Moreover, the MACD line drives the bullish narrative while sustaining the position above the signal line. Note that a break above the 100 may blast Uniswap significantly upward as investors speculate the rise to $40.