Uniswap rallied from the recently formed support at $12.5. At this position, the buyer congestion zone was a saving grace keeping in mind the gruesome breakdown from highs above $40. Initially, the downtrend was gradual, but it gained momentum toward the end of last week.

Following the intervention of the bulls at $12.5, the native token to the largest decentralized exchange lifted above $20. The price action gained momentum and seemed ready to break out toward $30.

However, the 50 Simple Moving Average (SMA) on the four-hour chart cut shot the recovery. At the time of writing, Uniswap trades at $23 amid a correction from the seller congestion zone.

Uniswap needs time to consolidate ahead of another upswing

The immediate recoil of the support proves to have been a reflex action. Therefore, recovery is unlikely to have been sustained. In other words, buyers need more time to plan the mission of pulling the price above $30 and starting the next phase for gains beyond $40. Consequently, the short-term support at $22 must be defended to pave the way for the uptrend.

Meanwhile, the Moving Average Convergence Divergence (MACD) indicator has a bullish outlook, implying that not all is lost for the bulls. Although recovery has stalled slightly beneath the mean line (zero line), the MACD line (blue) divergence above the signal line reveals that bulls have the upper hand. 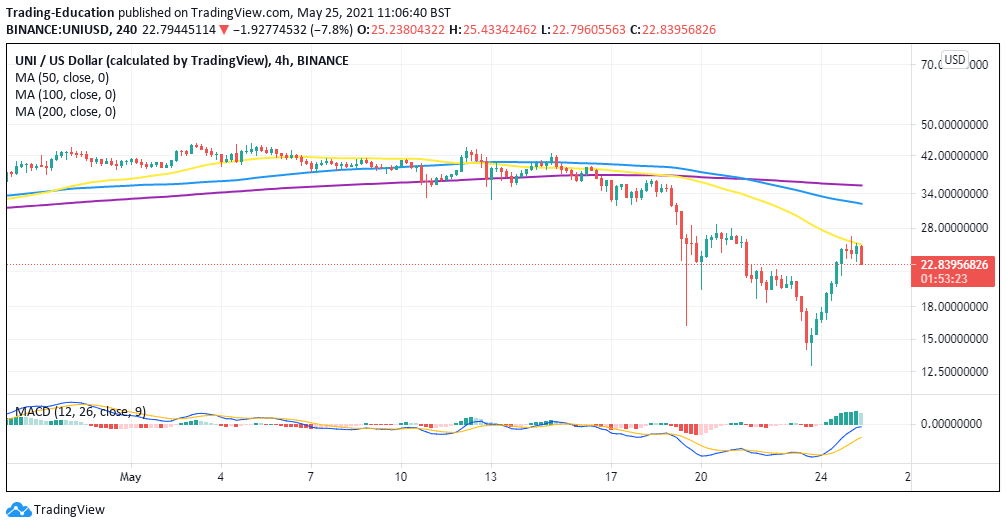 The In/Out of the Money Around Price (IOMAP) model by IntoTheBlock, validates the consolidation narrative before another liftoff. This follows an immense resistance between $23.2 and $23.8. Here, around 2,100 addresses previously purchased roughly 4.9 million UNI.

On the downside, relatively strong support running from $21.2 to $21.9 would keep the bearish advances at bay. Note that around 7,300 addresses had previously bought approximately 3.2 million UNI. The support and resistance highlighted by this on-chain model might keep Uniswap in consolidation.

If the support at $22 holds and the price cracks, the resistance at the 50 SMA. Uniswap is likely to extend the upswing closer to $30. Higher support will keep investor interest up in the near term, especially after the massive drop experienced last week.