Uniswap held firmly to the support at $26.5 during the weekend’s slide from highs close to $40. Bulls took control of the upswing, leading to gains above $30. This move triggered massive buy orders, increasing the tail force on UNI, in turn, pushing the price to $38. At writing, Uniswap teeters at $37.25 while bulls battle the hurdle at $38 for gains past $40.

The 12-hour chart brings to light an ascending triangle. This is a continuation pattern that is bullish and tends to form during an uptrend. Two trend lines form the triangle, connecting the relatively equal peaks (x-axis) and the ascending lows (hypotenuse).

Following a period of consolidation, a breakout is expected once the price cracks the x-axis resistance. The breakout has a precise target measured from the pattern’s highest to lowest points. For instance, Uniswap lift above the horizontal resistance may catapult the price 74% higher to $62. 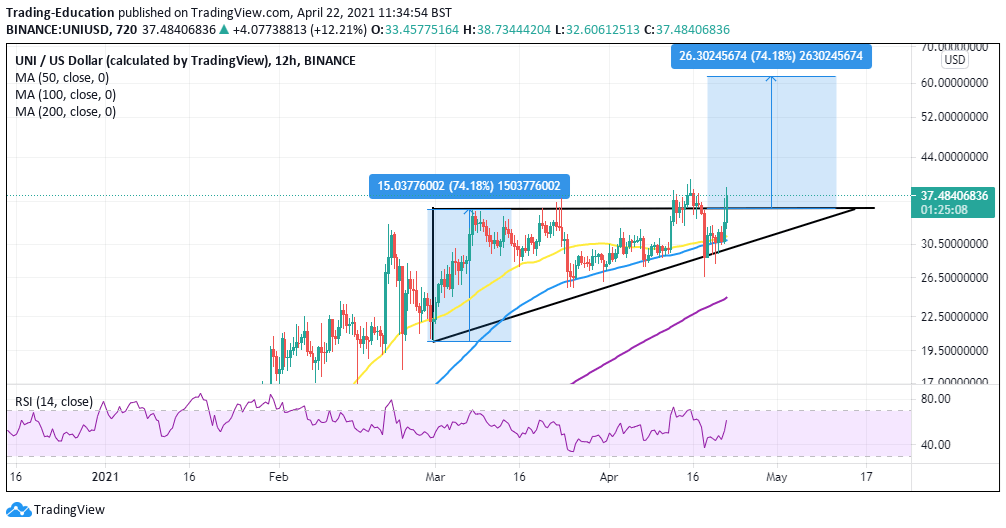 The upswing has been affirmed by the Relative Strength Index (RSI) as it heads fast into the overbought region. As long as the technical picture remains unchanged, Uniswap will continue to hit new milestones.

The In/Out of the Money Around Price (IOMAP) model by IntoTheBlock shows the absence of robust resistance zones capable of suppressing the uptrend. The focus has been directed to the area running from $38.01 to $38.19. Here, around 1,300 addresses previously bought nearly 2.6 million UNI.

On the flip side, the decentralized finance token sits on areas with immense buyer congestion. The most robust region runs from $31.8 to $32.9. Here, roughly 5,600 addresses previously bought approximately 10 million UNI. Cracking this zone would be challenging for the bears; hence, Uniswap is unlikely to drop in price.

Following the technical pattern breakout, the least resistance path seems upward. However, we cannot ignore the stubborn hurdle between $38 and $40. If not broken, overhead pressure may start rising and jeopardize the support areas at the 50 Simple Moving Average (SMA) near $30.5 and the buyer congestion zone at $26.5.