Uniswap, a leading decentralized exchange-based token, has broken away from its peers to lead a fierce battle against the formidable bearish front this week. In the wake of the massive selloff in July to $10.5, bulls assumed control of the price amid near oversold conditions, as observed in the daily chart.

The token struggled with resistance at $20 earlier this week, but buyers focused on $25. Following the launch of a new fund by Bitwise Investments, Uniswap stretched the bullish leg to $25, where it has encountered robust seller congestion.

The 100-day Simple Moving Average (SMA) and the 200-day create a confluence resistance at $25, limiting the uptrend. Uniswap is dancing at $25.9 at the time of writing. Bulls are not prepared to lose the battle at this level, especially now that the next key hurdle at $30 is in sight and within reach.

A comprehensive look at the daily chart reveals a bullish impulse, confirmed by the Moving Average Convergence Divergence (MACD) indicator. The liftoff from $10.5 appears to have hung on a buy signal presented July 22. If the technical tool’s picture remains bullish in the coming sessions, we can expect UNI to step toward $30. 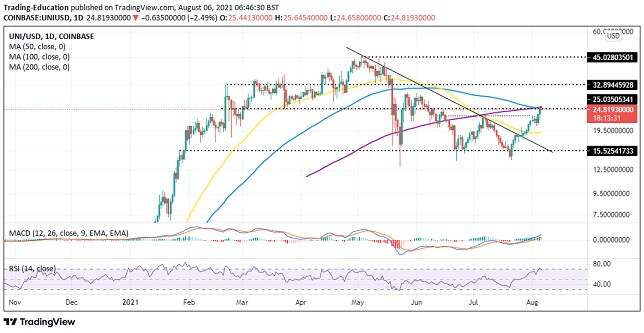 Realize that a daily close above the confluence resistance will most likely trigger immense buy orders as investors stream in to take advantage of increased speculation for gains above $30.

On-chain data by Santiment, one of the leading behavioural analytics platforms, shows that large volume holders commonly referred to as whales continue to stock up UNI. Currently, addresses with coins between 1 million and 10 million take up 32.8% of Uniswap’s total circulating supply, based on a 30-day trailing average. Note that the 1.2% increase occurred between August 3 and August 6. As the risk appetite for UNI increases, the price might rally, as has been the caser in the past.

On the downside, the absence of robust support areas is a perfect recipe for a correction that could pull Uniswap toward $20.