Uniswap Price Forecast: UNI Price Gears up for a 69% Rally to $60 if this Crucial Resistance Caves In

Uniswap, alongside some selected altcoins, leads the price action in the market. On an hourly basis, UNI is up nearly 4%. The technical picture on the four-hour chart brings to light the formation of an ascending triangle, which is a highly bullish pattern. Meanwhile, a hurdle erected at $44 must come down for Uniswap to extend the up leg toward $60.

The decentralized finance (Defi) token is exchanging hands at $41 at writing. Since mid-April, bulls have been mainly in control; hence UNI lifted from around $26.5 to highs of $44. Despite the significant liftoff, Uniswap faces immediate resistance at $44. Therefore, bulls’ focus is to secure higher support to secure the uptrend.

It is essential to realize that the impact of the ascending triangle pattern on the four-hour chart is still intact. In other words, bulls have the potential to hit highs around $60, especially if Uniswap gets a four-hour close above $44. 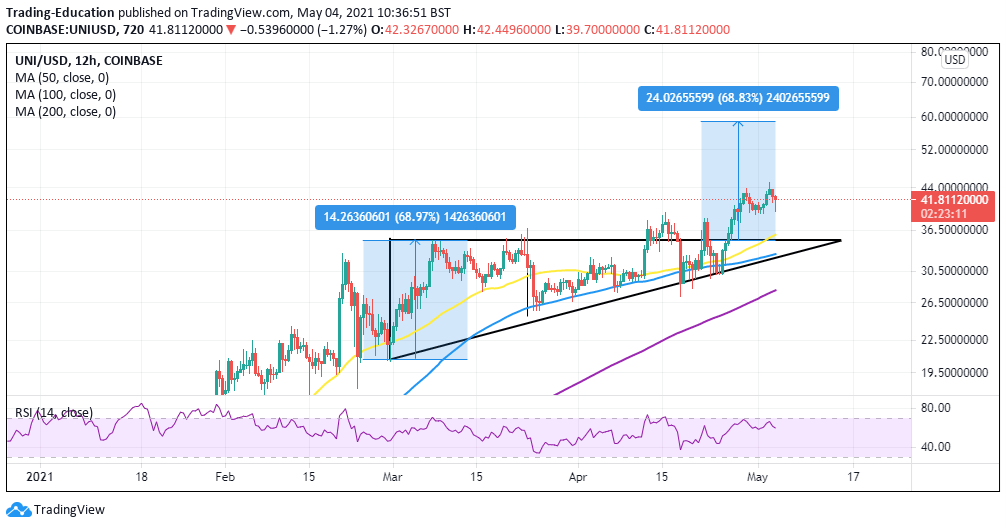 The In/Out of the Money Around Price (IOMAP) model by IntoTheBlock highlights the absence of a substantial resistance zone. However, the model directs attention to the region running from $42.5 to $42.8.

Here, roughly 4,400 addresses previously bundled up nearly 2.6 million UNI. A break above this seller congestion will likely lead to a breakout eyeing $60.

Uniswap sits on top of an area with an immense concentration of buyers on the downside. This region extends from $39.2 to $40.5. Here, approximately 5,400 addresses previously purchased around 11.2 million UNI. Other medium-strong support zones exist to ensure that correction is avoided altogether. Therefore, it would be an uphill battle to kick start a downtrend.

The Relative Strength Index (RSI) on the four-hour chart has been rejected from the overbought region, implying that overhead pressure is rising. If the RSI hits the midline, the downtrend is likely to gain traction. On the downside, several support areas could be considered, including $36.5, $30.5, and $26.5.