VeChain Price Analysis: VET sets out for liftoff to $0.35; here are the levels to watch

VeChain embraced support at $0.15, ending the downtrend from the recently achieved high of $0.27. A descending parallel channel’s lower boundary played a crucial role in stopping the losses. Meanwhile, the token has lifted above $0.2, and bulls seem to fight for another upswing past $0.3.

The Moving Average Convergence Divergence affirms the bullish notion. It is essential to keep in mind that the MACD is a momentum oscillator utilized in trading trends but rarely used to identify overbought and oversold conditions.

This indicator manifests on a chart with a couple of trend lines oscillating with no boundaries. Note that the crossover of these two lines is a trading signal resembling that of the moving average system. 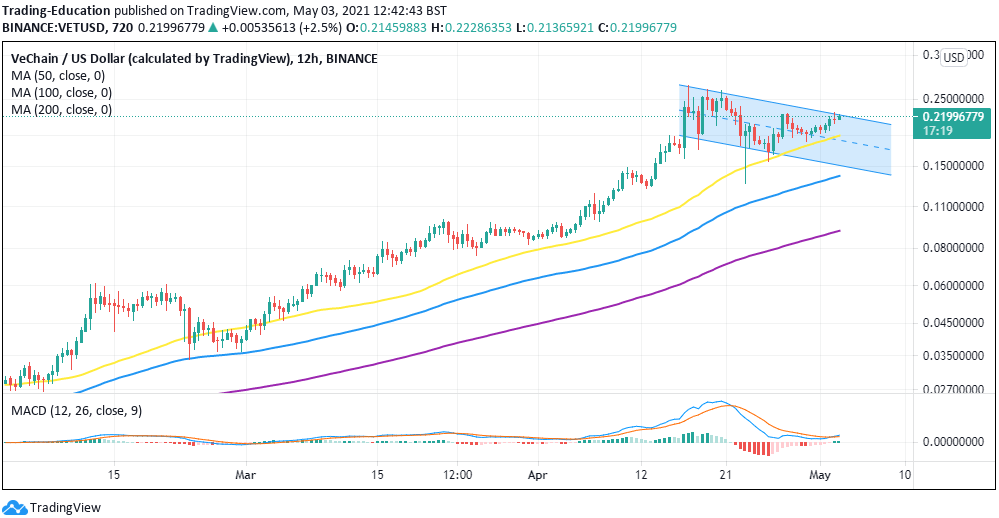 As the MACD flips bullish, VeChain draws closer to a breakout above the parallel channel. Closing the day beyond the upper limit could significantly trigger massive gains. Moreover, a break above $0.3 will also lead to an uptick in network activity. The fear of missing out (FOMO) will also add strength to the tailwind; thus, lifting VET past $0.35.

On the flip side, a correction will come into the picture if VeChain fails to break the descending channel’s upper boundary resistance. An increase in overhead pressure may trigger massive losses as investors cash out to make a profit.

On the downside, support has been envisaged at the 50 Simple Moving Average (SMA) on the four-hour chart. The channel’s middle boundary will also bound the losses, while the lower limit might stop the bearish leg from extending to $0.15.