VeChain Price Forecast: VET is Only a Whisker Away From 52% Recovery to $0.2

VeChain tanked to $0.05 amid the crash in the cryptocurrency market in May. On the brighter side, recovery has been consistent with the price initially lifting to brush shoulders with $0.15. However, a resistance came up, preventing the bullish leg from extending further.

Despite the hurdle at $0.15, VET has formed a higher low pattern and birthed an ascending triangle. Investors expect the upswing to continue in the short term as the critical technical pattern matures.

VeChain battles resistance ahead of a massive liftoff

VET is exchanging hands at $0.123 at the time of writing. The token is also doddering in the apex of the ascending triangle. Note that this is a highly bullish pattern in technical analysis. It forms mainly in up-trending markets.

The pattern is developed with two trend lines, linking the sequential higher lows and the relatively equal peaks. The ascending trend line highlights the intensifying bullish grip. The horizontal resistance (x-axis) suggests that buyers have a challenge gaining traction, which explains the period of consolidation characterized by low trading volume. 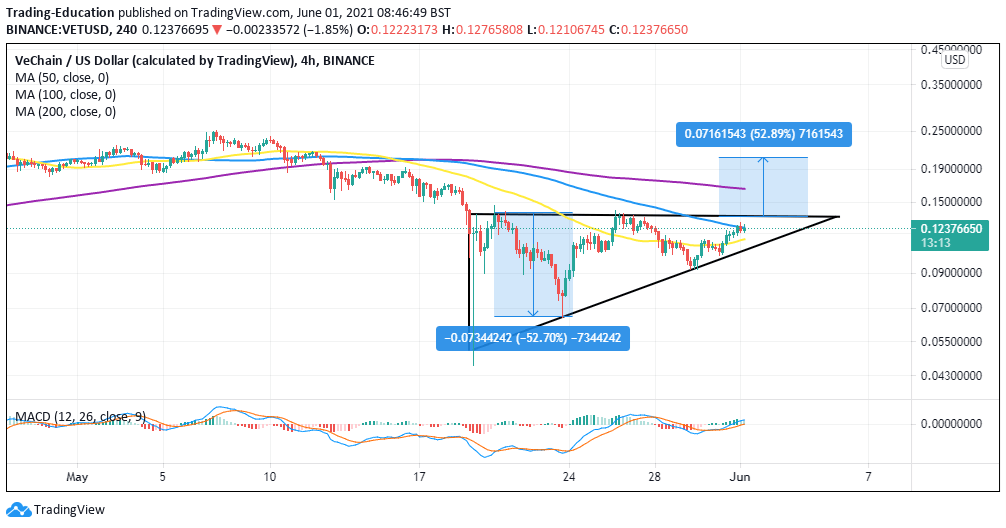 Note that a breakout is usually expected to come into play when the price cracks the x-axis resistance. The breakout is affirmed by increasing trading volume and a target measured from the highest to lowest points.

It is essential to realize that the uptrend has been accentuated by the Moving Averaged Convergence Divergence (MACD) indicator. This technical indicator follows the trend of an asset and measures its momentum. When the 12-day moving average crosses above the 26-day moving average, a buy signal occurs. Besides, gaining ground above the mean line (0.00) helps drive the bullish narrative.

Note that VeChain faces immediate resistance presented by the 100 Simple Moving Average (SMA) on the four-hour chart. If the resistance at this level spikes, losses are likely to come into play. A bearish impulse can also emanate from an ascending triangle pattern, although not very often. In other words, a correction under the triangle could lead to a significant downswing in VET’s price.