VeChain embraced support at $0.08 following the massive downfall from highs above $0.25. The colossal downswing followed the general crash in the cryptocurrency market. Meanwhile, cryptocurrencies have begun making their way into upward trajectories across the board.

VET has not been left behind, especially with more than 20% accrued over the last 24 hours. At the time of writing, the price has made it above the crucial $0.1 level. VeChain is teetering at $0.13 after confirming a break above the 200 Simple Moving Average (SMA).

VeChain poised to break out of the falling wedge pattern

The 12-hour chart shines a light on the highly bullish falling wedge. This pattern mainly appears during downtrends. Initially, it signifies the intense bearish grip, but as the trend lines converge, bears tend to lose grip as bulls prepare to take control.

A breakout occurs before the lines meet, marking the beginning of an uptrend. The upswing is characterized by increased trading volume and has a target measured from the wedge’s widest points, 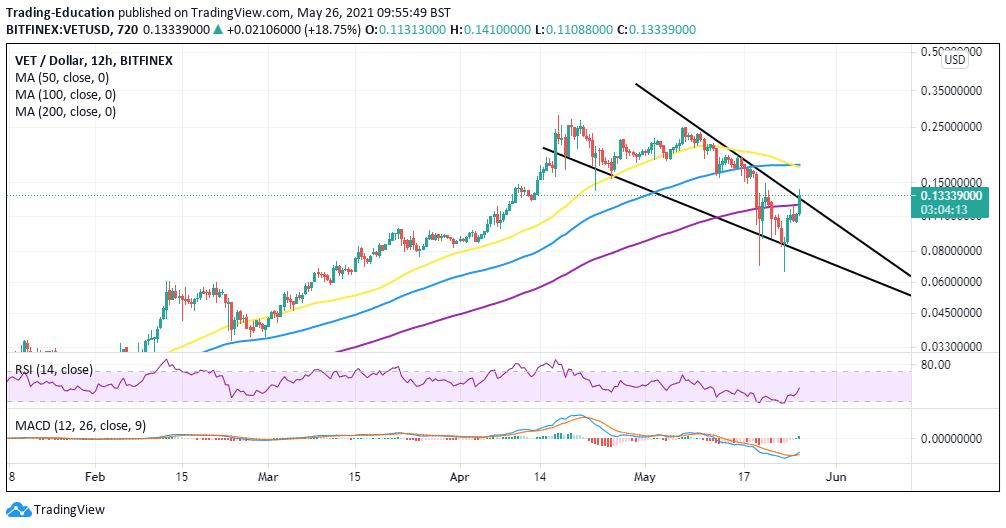 It is worth keeping in mind that the Moving Average Convergence Divergence (MACD) validates the recovery. As the MACD line (blue) crossed above the signal line, a buy signal encouraged investors to enter the market at a relatively lower price. The bullish outlook will get aggressive if the MACD enters the positive region in the near term.

Subsequently, the Relative Strength Index (RSI) adds credibility to the narrative, as illustrated by the movement from the oversold territory as illustrated on the chart. Closing the gap toward the overbought region is confirmation of the bulls being entirely in control.

The same four-hour chart reveals the immediate resistance at $0.14. VeChain bulls have to strike above this zone to ascertain the potential of the uptrend continuing to $0.2. Moreover, a confluence resistance at $0.18 created by the 50 SMA and the 100 SMA on the 12-hour chart may delay the breakout. 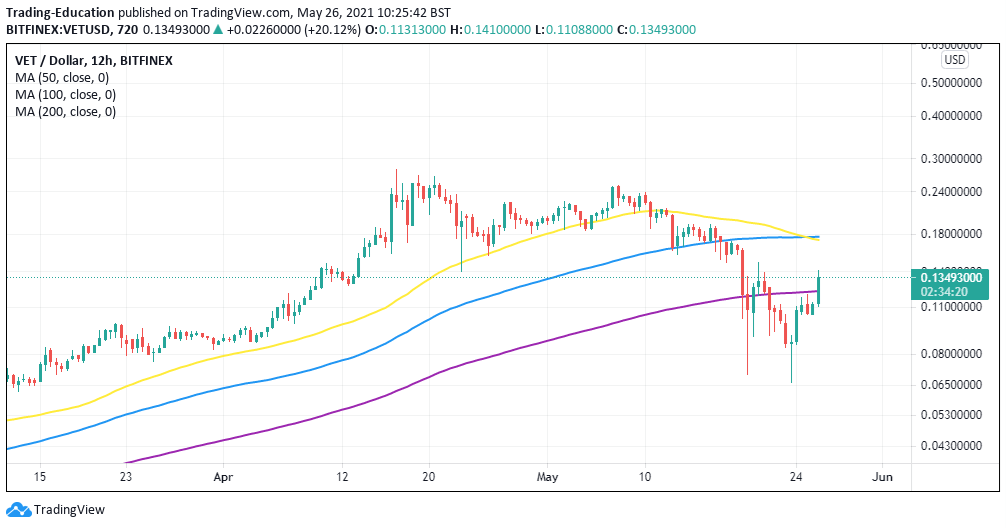 On the flip side, closing the day under $0.14 would increase overhead pressure. Support at the 200 SMA remains critical to VeChain. If lost, a correction will come into play, pulling VET back toward the primary anchor at $0.8.