VeChain is moving alongside the best performing cryptocurrencies as the week enters the home stretch. Over the last 24 hours, VET grew in value by more than 10% to trade at $0.12. Before the ongoing breakout, the token had lost ground to $0.0805. Currently, bulls are entirely in control, gaining confidence from the most recent support at $0.1.

The VeChain Foundation has left many of the project's fans guessing after teasing a major collaboration with what it terms "one of the biggest logistics companies in the world." The tweet has triggered a lot of discussions, where some people believe that it is about time that VET broke out to higher price levels.

Earlier this week, the foundation had announced a vote for the launch of the initial phase of the POA2.0 (SURFACE) upgrade on the mainnet. According to VeChain, the mission is "to deliver a secure, stable and scalable public blockchain and enable mass adoption of blockchain technology across the globe."

SURFACE initializes a "Secure, Use-case-adaptive, Relatively Fork-free Approach of Chain Extension." The upgrade is designed to enhance "finality and data security by uniquely combining the two most common consensus types - the Nakamoto and Byzantine Fault Tolerance (BFT) consensus mechanisms - allowing the network to benefit from the strengths of each type whilst eliminating their weaknesses."

VeChain finally confirmed a break above the falling wedge, as shown in that. A descending wedge is a highly bullish pattern that often marks the beginning of a bull cycle. With fundamentals and macro factors improving in favor of VeChain, the price could quickly rally to $0.15 and later $0.2.

Meanwhile, the 10% growth in the last 24 hours deals with the apparent seller congestion at the 200-day Simple Moving Average. Bulls seem poised for an extended leg north. As long as this moving average flips into support, the uptrend to $0.15 would be easily achievable. 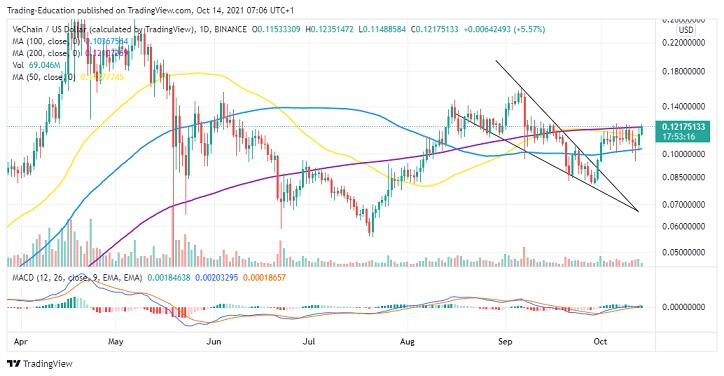 The positive technical outlook can substantiate the prevailing uptrend. VET's daily timeframe based on the MACD reinforces the uptrend. The token is expected to close the gap to $1.5 near-term as the MACD crosses above the mean line. Note that the potential partnership news could quickly bolster VeChain above $0.2.