An analytical guide to investing in EOS in 2021

EOS has been on the radar of many investors as there has been a constant buzz around the altcoin and its platform, EOS.IO. The buzz started with the Initial Coin Offering of EOS. The first ICO lasted almost a year, which is one of the longest-lasting in the industry. Not only was it the longest, but it also raised a record of $4 billion. This outstanding ICO performance almost instantly put EOS under the spotlight.

An important question to consider is whether or not EOS has lived up to its reputation. Is EOS a good investment? Although it’s hard to find a definite answer to this question, one way to look at it is to identify the drivers of the price of EOS.

What are the drivers of EOS’s price?

The three factors that determine the price of EOS are:

The platform, EOSIO, is an open-source next-generation protocol. The vision is to build a decentralized blockchain with lightning-fast transaction processing speed and practically no transaction fee. The focus of the platform is smart contracts which will allow the release of decentralized apps.

With the world moving fast towards digitization, cryptocurrencies have been aspiring to provide speed and agility to users, but not many have succeeded. EOS has taken the goal to the next level as it is aiming to be able to facilitate a million transactions per second. If that happens, then this can boost the cryptocurrency industry a lot. EOS is also striving to increase the usability of smart contracts by offering main features as built-in in its platform, which would not only increase speed but as well as ease.

EOS bears many similarities to the queen of cryptocurrencies, Ethereum, and not only has it incorporated some of the hallmark features of the queen, but it has also focused on the gaps Ethereum has. Due to this reason, EOS has been called the “Ethereum killer” by the lead developer, Daniel Larimar. Larimar has also been cited for having said that EOS possesses the strongest yet infrastructure for decentralized apps.

The major difference between Ethereum and EOS is the consensus mechanism. Ethereum uses a Proof of Stake (PoS) whereas EOS has a Delegated Proof of Stake (DPoS) mechanism in place. The DPoS enables EOS to save time as conventional mining is not required. EOS is more efficient when it comes to processing transactions. Ethereum can process 15 transactions in a second where EOS processes a whopping 1000 tps, and it is aiming even higher, for 1 million. Hence, EOS is highly scalable. Miners, or rather validators, are not chosen because of the number of tokens they have but rather through a more democratic process.

EOS can be thought of as a very ambitious cryptocurrency. EOS was launched on 18th January 2018, and it is currently under development. It is impressive the kind of attention and support EOS has garnered in just a short while. This could also be an indication towards the hype EOS may create once it has been completely developed.

EOS essentially operates in the same way as all cryptocurrencies as a payment system. According to CoinList, EOS has surpassed major credit cards like Visa when it comes to transaction processing. EOS also has many similarities to Ethereum, although EOS is taking things to a different level.

EOS is able to process a good number of transactions that too, without any additional fees. This is achieved through a unique mechanism similar to that of Ethereum’s. Block producers are paid by the blockchain, and hence, all additional fees are eliminated. Another feature assisting the framework in keeping up its balance is the inflation rate.

Consistently, two squares are created on the EOS blockchain. But just one block producer is allowed to make a block at one point. These limitations ensure that the platform is working at the ideal level. A block producer who fails to deliver any blocks throughout their designated time span is briefly taken out from the network to ensure efficiency.

The EOS network can also be used to mine or store data by organizations. It also has storage and server-hosting features available which would definitely aid the usability and production of decentralized apps.

As one of the goals of EOS is to increase the adoption of blockchain technology, the EOS network also has a good ease-of-use. The platform is user-friendly and relatively simpler.

What Are The Drivers Of EOS Price?

Predicting the prices of cryptocurrencies is a very tricky business. Oftentimes, there are not a few factors at play but rather a plethora of factors. It becomes difficult to differentiate and analyze which factors hold more importance. But as the price prediction is of utmost importance to investors, here is our take on the major factors that play a role in determining the price of EOS.

3 Factors That Drive The EOS Price:

The concept behind the network of EOS has lured many people towards it. It is one of the reasons why the altcoin was so successful in its Initial Coin Offering. The things that EOS is striving to achieve appeal to many people. However, the network is not yet fully developed. Although EOS has fulfilled some of its promises by offering massive scalability and virtually at no costs, it has yet to be seen how many of all the promises will EOS actually fulfil.

In the cryptocurrency market, Bitcoin plays a huge role. As the king of cryptocurrencies, Bitcoin majorly affects the prices of other cryptocurrencies. As the industry witnessed in the 2017 boom, cryptocurrencies tend to follow Bitcoin. EOS has a correlation coefficient of 0.83 with Bitcoin. This means that any changes in the value of Bitcoin will affect EOS’s price greatly. 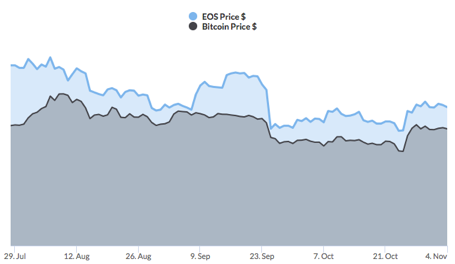 EOS also faces strong competition from the queen of cryptocurrencies, Ethereum. This competition poses a threat to EOS’s prices as Ethereum is one of the original coins and has a stronghold over the market. Only time will tell if EOS can defeat the queen or will it succumb to the queen’s power.

The vision of EOS is to make blockchain technology accessible for everyone and to increase the ease of use. With that in mind, EOS was designed and is being currently designed, for adoption on a massive scale. The scalability of EOS is one of its hallmark features as EOS is aiming for a million transactions to be processed in one second.

EOS is suitable to be a digital payment platform. It is also striving to encourage the use of blockchain technology through smarts contracts and decentralized apps. We have also seen an increase in the adoption of cryptocurrencies, and as EOS nears achieving its vision, we can see an increase in its adoption. With increased adoption, the perceived value of the coin would increase, which would drive its prices up.

Have you considered buying EOS?

EOS is currently ranked 14th in the cryptocurrency market with a market capitalization of $2,929,576,070 USD. It has a circulating supply of around 950 million altcoins and a hard cap at 1 billion tokens. The current price of the EOS is $3.10. EOS peaked for 2020 at around $5.4, but after some very low dips, it broke the $3 resistance level and is currently stable at that level. 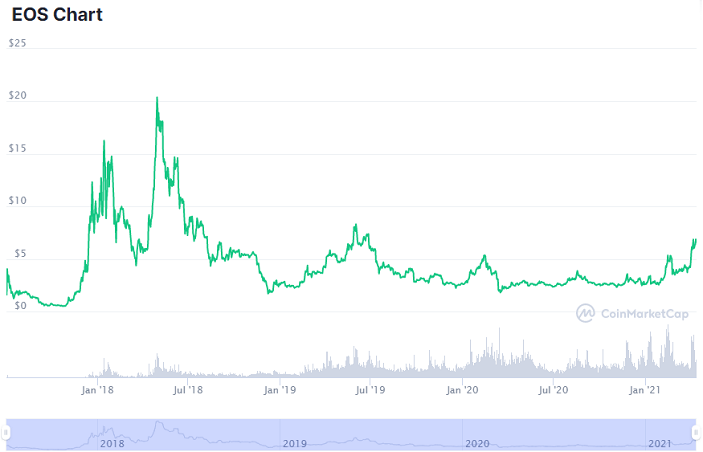 The founder, Daniel Larimer, has also co-founded Steemit and BitShares and a lot of the positive buzz around EOS can be attributed to Larimer’s good reputation in the cryptocurrency world. This has also been a source of an optimistic future for the altcoin. 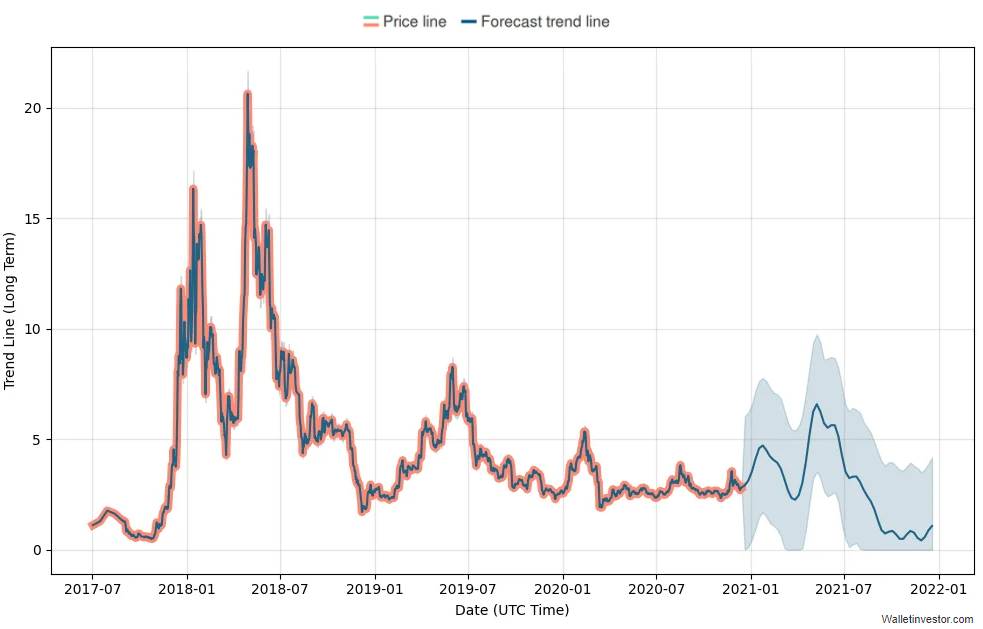 According to Wallet Investor, EOS is going to have some major fluctuations in the new year. In the first few months of the new year, EOS is expected to peak at around $5, but in the worst-case scenario, EOS can drop below the $1 mark. Wallet Investor has also predicted that in the short EOS could experience a negative change of around 64%, and EOS can drop $1.103.

All in all, the general market sentiment of EOS seems to be bullish, which can indicate that EOS may grow in the future. Other factors such as the growing community, increased acceptance etc. will also play a vital role in increasing prices of EOS.

Ready to invest in EOS?

Pros and Cons Of Investing in EOS

Pros of investing in EOS:

✅ EOS can process as many as 1000 transactions per second and is aspiring to drive the number up to a million.

✅ EOS is highly scalable, cost-effective as well as eco-friendly.

✅ Block producers invest in the network and hence, has a stake in EOS.

Cons of investing in EOS:

❌ EOS has had some security issues. In May 2018, it was revealed in a report that hackers have been able to identify a number of problems in the network’s security.

❌ There have also been concerns in regards to the decentralization of EOS as 49.67% of the EOS coins are available on a few top addresses. This means that collusion of these addresses can lead to the network being centralized as a few will gain authority over the network.

❌ The extensive involvement Block.one, the core organization behind EOS, in the network has also been a source of dislike.

❌ EOS faces strong competition from some established coins like Ethereum.

Start Investing In EOS With eToro 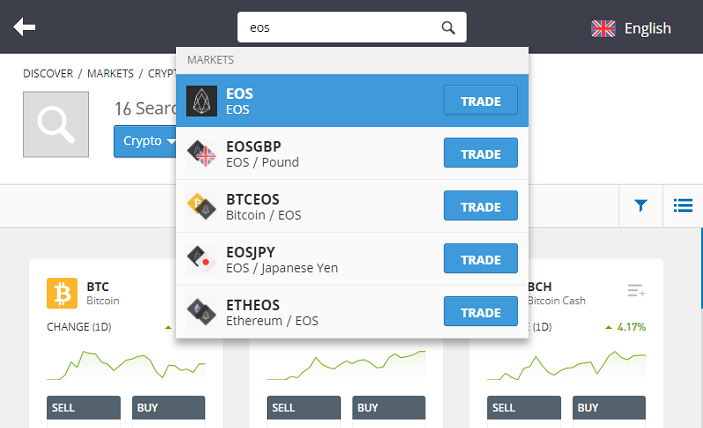 EOS is expected to have great potential in the future, with long-term investment as a profitable option. If you are thinking of investing in EOS, then eToro is your platform.

eToro is one of the biggest names in the market when it comes to trading platforms as it is ranked by various sources as one of the best. It alos offers some unique features like social trading that are suitable for beginners, but it also has advanced options for experts. The platform is user-friendly and charges some of the lowest rates in the market.

We hope this article has informed you about EOS and has motivated you to start your investment in the crypto market.

If you have liked this article, please share it, in case someone else wants to benefit from it. If you want to know more about other cryptocurrencies, take a look at our crypto article sector.