Stellar has made a considerable recovery from last week's trip down the rabbit hole. Settling above $0.4 proved that the slightest resistance path is upward. However, the hope of gaining ground to $0.7 has been thwarted by the resistance at the 200 Simple Moving Average (SMA).

XLM is correcting from the hurdle highlighted by the 200 SMA. With a prevailing market value of $0.43, Stellar lost nearly 3% in the last 24 hours. Data by CoinGecko shows that the bearish outlook is far from over, keeping in mind the 4% loss in seven days and 10% in 30 days.

The 12-hour SuperTrend indicator adds credence to the narrative while maintaining the sell signal presented on May 21. This technical indicator is a chart overlay that tracks the trend of an asset.

Traders utilize the SuperTrend to identify positions to short or long an asset. When the line turns from green to red and flips above the price, it signals investors to sell. On the other hand, turning green and moving beneath the price advises traders to buy. 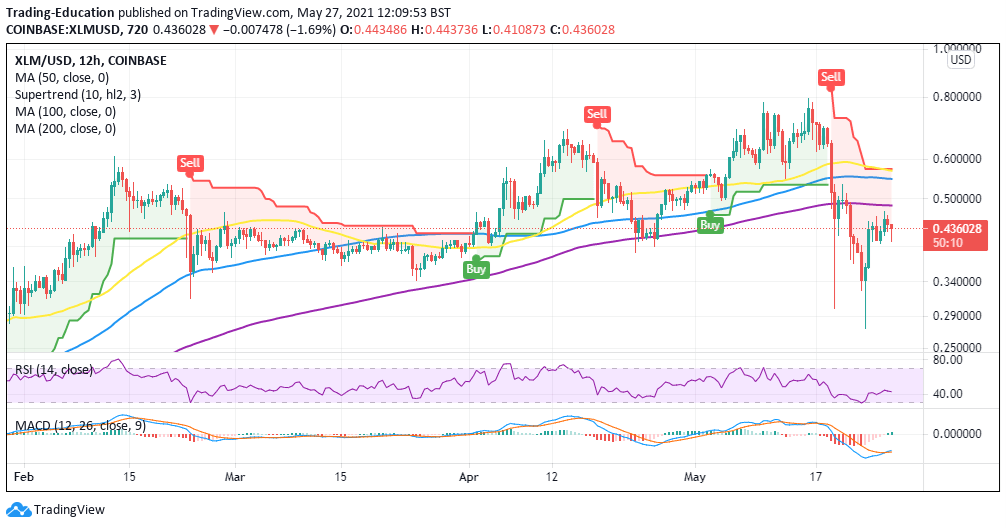 Amid the ongoing correction, support at $0.4 is crucial because if unshaken, buyers will once again focus on the mission of breaking barriers toward $0.7. On the contrary, if shattered, massive sell orders will be triggered, leading to losses eyeing $0.34 and $0.25.

The same 12-hour chart shows a sideways moving Relative Strength Index (RSI). This is a mundane technical picture, inferring that consolidation or a ranging market could come into the picture in the coming sessions. The RSI is an indicator to watch because movement toward the oversold region may trigger sell orders.

A comprehensive look at the Moving Average Convergence Divergence (MACD) confirms that the uptrend is not lost yet despite the correction. Note that the MACD line has just crossed above the signal line; hence, the bullish outlook. Its movement in the direction of the mean line and the positive region would be a bullish signal.