Stellar is not afraid to show its bullish prowess, especially after the massive battering experienced on Monday and Tuesday. A breath of fresh air swept across the market on Wednesday, with crypto assets gaining ground across the board.

The cross-border money transfer token bounced off support at $0.2, whereby bulls took complete of the price. As XLM shattered every hurdle along the way, the path to $0.3 became clearer. At the time of writing, the token teeters at $0.26 and holds above all the applied moving averages, including the 50 Simple Moving Average (SMA), the 100 SMA, and the 200 SMA on the four-hour chart.

Will XLM Price Settle Above $0.3 In The Near Term?

As the uptrend is nurtured, more buyers return from the sidelines, making haste to get the most out of this recovery. In the meantime, higher support, perhaps above $0.26, will ensure the bull’s attention remains on $0.3 and levels beyond.

It is imperative to note that the Moving Average Convergence Divergence (MACD) indicator adds credence to the bullish outlook by sustaining a call to buy Stellar. The MACD is a trend-following indicator that calculates the momentum of the trend.

At the same time, signals to either short or long the asset are sent as the moving averages oscillate in the direction of the trend. For now, Stellar’s uptrend seems intact, especially with the MACD settling above the midline. As the divergence between the 12-day EMA and the 26-day EMA expands, the odds for another leg up soars.

Therefore, it is a matter of time before XLM makes its way above the coveted $0.3. Note that trading above this level may trigger more buy orders as investors flock to the market, adding weight to the tailwind. 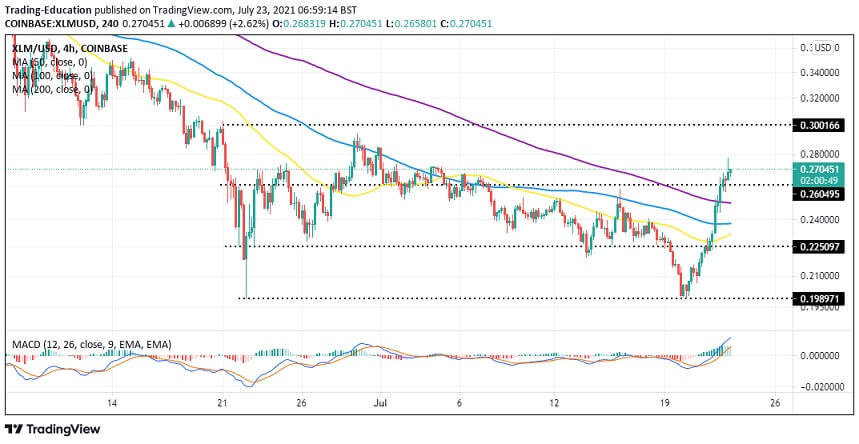 The exact four-hour timeframe brings to light a buy signal recently presented by the SuperTrend indicator. This technical tool follows Stellar’s trend and alerts the bulls to take either short or positions. Unlike the moving average, the SuperTrend utilizes the average true range (ATR) in its calculations.

XLM’s uptrend was affirmed after the SuperTrend closed the day below the price and change from red to green. If the technical picture remains unchanged, we anticipate a continued upward price action.

It is worth mentioning that the Relative Strength Index (RSI) is in the overbought region. On the one hand, it implies that buyers have the upper hand, but on the other hand, some will argue that a correction could occur as bears gain traction in the near term. Hence, the need to proceed with caution.