Stellar plummeted like other crypto assets amid the Bitcoin-triggered selloff on Wednesday. An initial mission eyeing gains above $0.8 fizzled out at $0.75, allowing bears to take control. Bitcoin’s gravitational force mid-week further destabilized the market, forcing Stellar on a correction path toward $0.5.

A weekly low was traded at $0.52; hence our previous downswing target to $0.5 did not materialize. Contributing to the support was the 200 Simple Moving Average (SMA) and the 100 SMA on the four-hour chart.

Stellar’s bullish comeback made it into the ascending parallel channel, a move that was perhaps a huge signal for buyers to return. The uptrend has extended past the 50 SMA and touched the channel’s middle boundary.

At the time of writing, XLM is exchanging hands at $0.66 amid an intense bullish push for gains above the middle boundary resistance. Trading above this zone would call more investors into the market. Note that the community speculates that XLM will soon spike to $0.8 and $1, respectively. 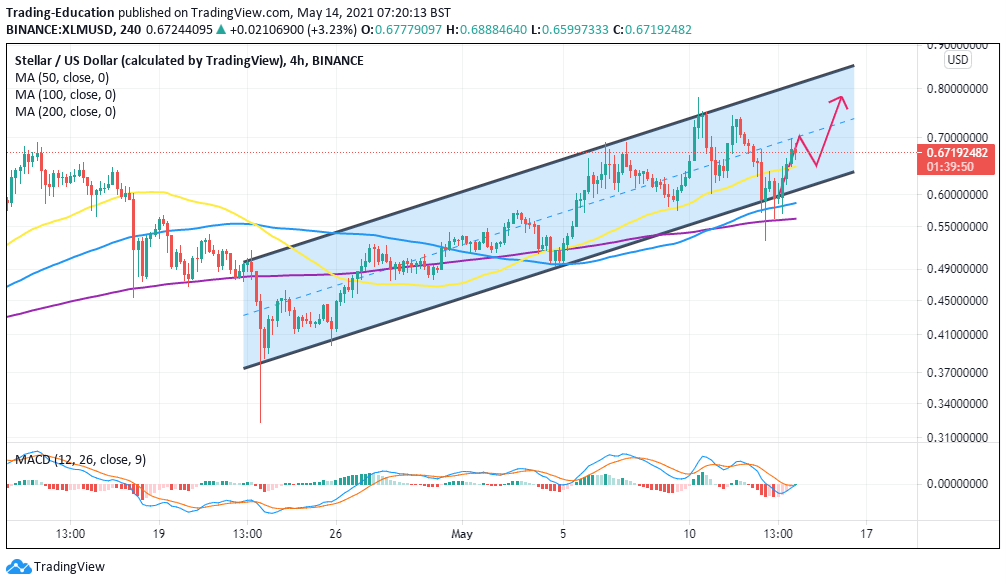 A comprehensive look at the chart reveals that short-term technical levels and indicators are bullish. For example, the Moving Average Convergence Divergence (MACD) is about to flip massively bullish. The indicator will soon cross into the positive territory, and the MACD line as the MACD line draws closer to striking above the signal line.

The four-hour SuperTrend indicator has a bearish impulse, as illustrated on the chart. In other words, Stellar is not entirely out of the woods yet. The indicator identifies positions to long or short an asset. When the SuperTrend turns red and moves above the price, it implores traders to sell, as it foresees the beginning of downward price action.

If the price action stalls under $0.7, overhead pressure will likely surge, adding pressure to the support at the 50 SMA. Other anchor zones to keep in mind include $0.6 and $0.52.