Stellar joined other selected digital assets to stage an altcoin season. Ethereum rallied beyond $2,000 while Ripple hit levels above $0.9. At the time of writing, XLM is dancing at $0.51 while bulls focus on breaking the two-month high of $0.55.

Following the support at $0.4, Stellar shot upward at lightning speed. Several resistance zones were shattered, including the confluence formed by the 50 Simple Moving Average (SMA), the 100 SMA, and the 200 SMA on the four-hour chart. The breakout rose above $0.47 and $0.55, allowing bulls to shift the attention to $0.55 and $0.6, respectively.

The cross-border token hit a barrier at $0.55, leading to a correction that sort refuge at $0.5. At the time of writing, Stellar is trading at $0.51 while buyers look forward to a breakout beyond $0.55. 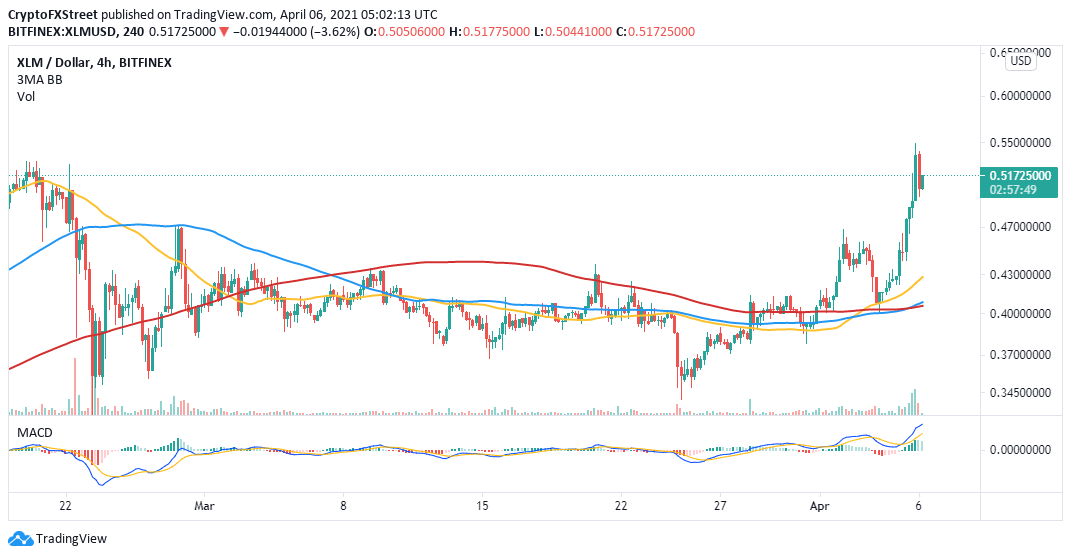 The TD Sequential indicator has flashed a sell signal on the four-hour chart. This call to sell manifested in a green nine candlestick. If validated, XLM will plunge in one to four four-hour candlesticks, marking the beginning of a significant correction.

The same four-hour chart shows the SuperTrend indicator with a bullish impulse. The indicator usually highlights the general trend of an asset in the market. These trends can last for several months, days and others hours depending on the market volatility. The prevailing signal implies that traders should long Stellar to anticipate the upswing to hit levels past $0.6.

Simultaneously, the Moving Average Convergence Divergence (MACD) indicator brings to light the presence of the bulls in the market. Based on this technical indicator, the least resistance path is upward. In other words, Stellar is likely to rise to higher levels than retreat to $0.4.