Ripple has gained remarkably from the support established at $0.52, lifting close to $0.6. Meanwhile, the price is dancing at $0.57 amid a push by the bulls to crack the critical resistance presented by the 50 Simple Moving Average (SMA) on the four-hour chart and the extended descending trend line.

The Moving Average Convergence Divergence (MACD) adds credence to the bullish outlook after presenting a call to buy XRP. Realize this is a trend-following tool that calculates the momentum of Ripple, thus sending bearish and bullish signals. As the 12-day exponential moving average (EMA) crossed above the 26-day EMA, odds for a significant rally increased.

Therefore, Ripple’s uptrend will stretch the bullish leg above $0.6 as the MACD closed the gap to the mean line. A break into the positive territory will add credibility to the optimistic outlook as XRP draws to $0.7. 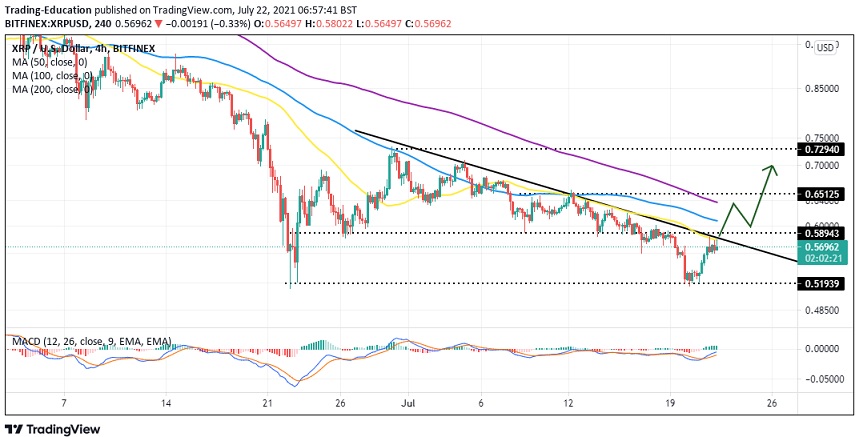 It is worth noting that bulls must take down the immediate hurdles at the descending trend line as well as the 50 SMA. Trading above these two key levels may cement the bulls’ growing influence in the market. Moreover, higher support, preferably at $0.56, must hold steady to avoid trimming the accrued gains with losses gaining traction to $0.5.

According to Santiment, Ripple’s on-chain activity is experiencing an uptick, especially in the number of new addresses joining the network. The active addresses metric tracks the number of addresses interacting on the XRP Ledger each day.

Spikes in this metric suggest that Ripple is gaining traction, especially in mainstream adoption. This increase also directly affects the token value, which gained ground from $0.52 to $0.57, as discussed. Therefore, this metric is worth noting and could foresee the direction Ripple’s trend takes in the coming days.

A buy signal has also been presented by the SuperTrend indicator on the four-hour chart. As the technical tool closed the day below the price, the color changed from red to green, inferring to investors that they should consider taking a long position in Ripple. As long as this technical outlook remains intact, XRP’s uptrend will be nurtured toward $0.7.

The Relative Strength Index (RSI) in the same four-hour timeframe shows that buyers are mainly in control. A break above the midline indicates that the buyers’ grip on XRP is quite firm.