Ripple has been forced to abandon the plan to hit levels above $0.6 before the mid of the week following a massive selloff. The bearish wave saw Bitcoin plunge under $30,000 for the first time in July while Ethereum tested support at $1,700.

At the time of writing, Ripple is teetering at $0.53 after holding onto support at $0.52. The breakdown from price levels close to $0.6 affirmed an expected downswing from a descending triangle pattern, as illustrated on the four-hour chart.

The Moving Average Convergence Divergence (MACD) recently presented a sell signal confirming the downtrend from $0.6 to $0.52. This call to sell XRP appeared after the 12-day Exponential Moving Average (EMA) crossed below the 26-day EMA. In addition, the MACD dived further into the negative territory, thus adding credence to the bearish narrative.

Support at $0.52 must hold to ensure that the descending triangle breakout target of $0.44 is not accomplished. Realize that this pattern is highly bearish and often marks the beginning or continuation of a downtrend. 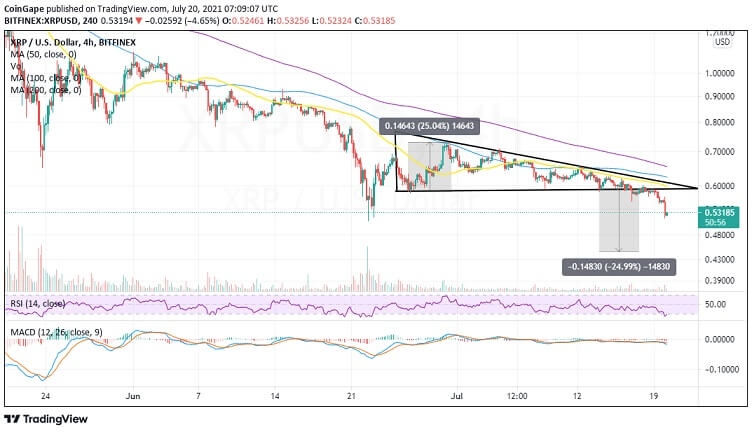 According to Santiment, Ripple’s downtrend is far from over. The market value realized value (MVRV) continues to reset, hinting at bears gaining more ground. This on-chain metric tracks the holders of XRP tokens move in the last 30 days and analyzed against the price at which the tokens last moved.

A low MVRV ratio shows that most holders are underwater and experiencing losses. Although they are unlikely to sell, panic tends to grip investors as the ratio dwindles. Until Ripple secures formidable support, profit levels will remain low while the price plummets. On the other hand, investors will begin to fill their bags as the MVRV ratio rises, making this metric noteworthy.

A death cross pattern on the daily chart reinforces the bearish grip. This chart pattern comes into play when a short-term moving average crosses below a long-term moving average. For example, the 50-day SMA has just crossed under the 200 SMA, implying massive declines in the offing. In other words, Ripple will likely consolidate below the death cross pattern in the coming sessions.

Looking The Other Side Of The Picture

The TD Sequential indicator will likely present a buy signal in the coming sessions. This call to buy XRP will take the form of a red nine candlestick. If confirmed, the selling pressure will begin to fades as buyers resume control. A break above $0.6 may trigger gains toward $0.7 as investors gaze at $1.