XRP Price Prediction: Ripple Exhausts the Downside, Setting Up for a 17% Upswing

Ripple price held the support at $0.61 toward the end of last week. This move kept bearish calls to $0.5 at bay, allowing bulls to stamp their feet down. Meanwhile, the cross-border money transfer token trades at $0.64 while battling a key immediate resistance at $0.65.

XRP is on the verge of a colossal outbreak as long as bulls can win the tug of war at $0.65. The confluence resistance at this level was created by the 50 Simple Moving Average (SMA) and the 100 SMA. A break above this level must lead to a four-hour close, validating the uptrend to $0.75.

It is essential to keep in mind that ascending parallel pattern support also protects Ripple’s downside. With this robust support in place, the bulls’ attention has been directed to $0.75.

The Moving Average Convergence Divergence (MACD) indicator adds credence to the bullish narrative as it closed the gap to the mean line. A confirmed break into the positive region will cement the position of the bull in the market. More buyers will be encouraged to leave the sidelines as XRP price gains ground to $0.7.

A bullish signal recently appeared after the 12-day exponential moving average (EMA) crossed above the 26-day EMA. Expanding the divergence between these two lines adds credibility to the bullish outlook and raises confidence. 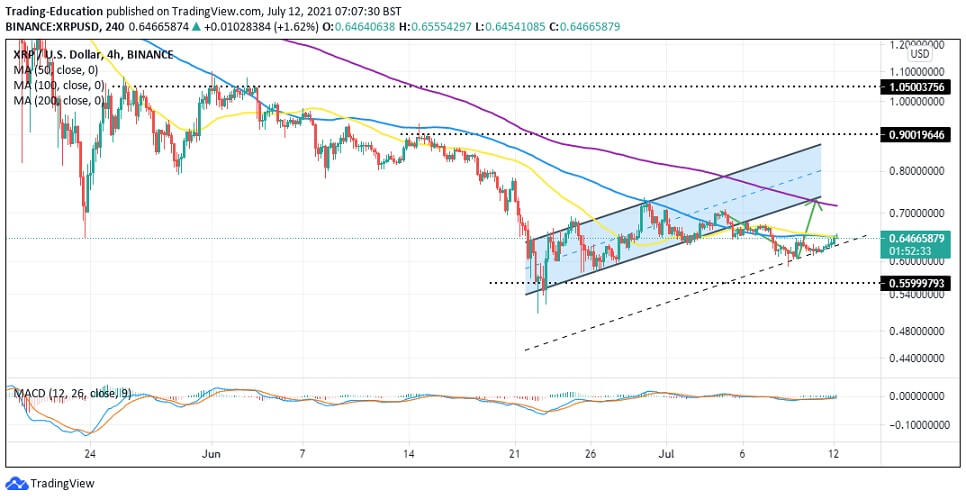 According to the Parabolic SAR on the four-hour chart, the odds for a bullish trend keep increasing. This technical tool is used as a trading strategy, especially in trending markets, because it attempts to signal trend continuations as well as reversals.

A four-close of the parabolas (dots) below XRP price will validate the uptrend. Hence, bulls are likely to hold onto the trend longer.

The exact bullish grip can be reinforced by the Relative Strength Index (RSI). The recoil from the oversold region above the midline shows that Ripple buyers have the upper hand. A continued movement into the overbought territory may trigger more XRP buy signals, thereby catapulting the price considerably above $0.75.

On the other hand, it is worth mentioning an overbought RSI could quickly to a reversal. Thus, the need for traders to be alert while making strategies to exit at the right time.