Ripple price impressively shot up mid-week to trade above $0.7. The bullish leg gained traction to $0.75 within the same days. However, a correction occurred with XRP retesting support at $0.7. At the time of writing, the cross-border money transfer token trades at $0.71 amid a renewed push for gains eyeing $0.8.

Ripple launches ODL Corridor Between Japan And The Philippines

Through its Asian-based strategic partner SBI Remit, Ripple has launched a new remittance corridor between Japan and the Philippines. The new service comes to life after a partnership between SBI Remit, Coins.Ph and the crypto exchange SBI VC.

On-Demand Liquidity is Ripple’s flagship product that allows payments companies to convert fiat currency to XRP. Instantly, the XRP is sent to the receiver and converted to the desired currency. A statement released during the service announced says:

“The Philippines is the third-largest destination for remittances from Japan, with Japan (10.50 percent) having one of the highest remittance costs in the world – almost twice as much as the average of all the G8 countries (5.92 percent).

This is Ripple’s first On-Demand Liquidity (ODL) service implementation in Japan, setting the stage to drive more adoption of crypto-enabled services in the region.”

Following the announcement, Ripple soared by nearly 20% to trade July highs of $0.75. The upswing was attributed to investors reacting to the ODL launch. However, some people rushed to sell the news, resulting in a correction to $0.7.

Meanwhile, Ripple is trading at $0.71 amid a renewed push for gains above $0.1. The four-hour chart shows XRP also holding at an ascending channel’s middle boundary. As long as the token keeps above $0.7, bulls will focus on lifting above $0.75, a move that may trigger more buy orders for gains above $0.8. 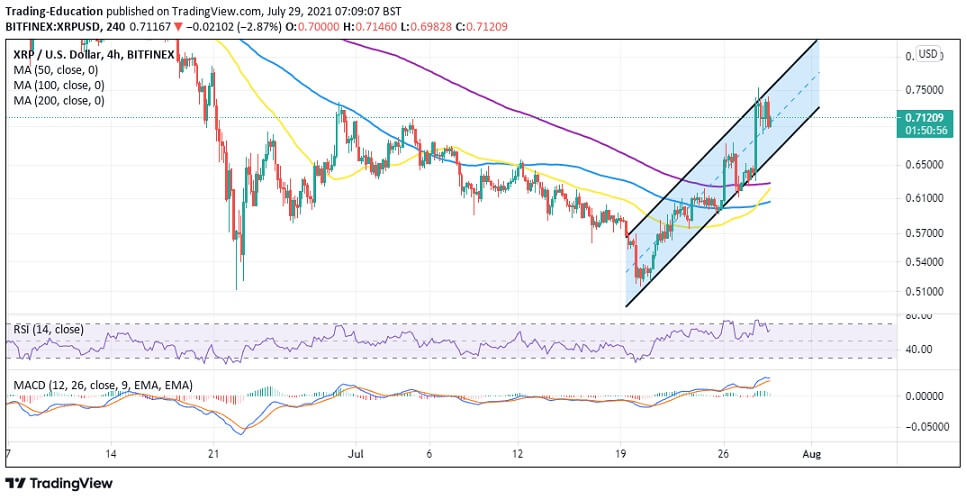 According to the short-term technical outlook, an upcoming golden cross pattern will affirm the uptrend. This technical indicator is highly bullish and forms when a short-term moving average (50 SMA) crossed above a long-term moving average (200 SMA). Its appearance will cement the bulls’ position in the market and perhaps trigger more buy orders for gains toward $1.

Looking At The Other Side Of The Picture

The Moving Average Convergence Divergence (MACD) may present a sell signal in the coming hours, especially if the support at $0.7 fails to hold. A break toward $0.65 will trim the gains accrued on Wednesday. Note that XRP could as well explore lower levels to $0.6 before recovery comes into play.